Horror Interview: Jeff Strand, author of I Have a Bad Feeling About This

Interview: Jeff Strand, author of I Have a Bad Feeling About This

Please welcome Jeff Strand back to the blog! Jeff’s new book, I HAVE A BAD FEELING ABOUT THIS, just came out and he was kind enough to stop by and answer a few of my questions! 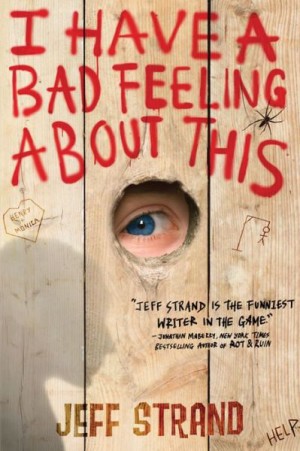 Congrats on the new book, I HAVE A BAD FEELING ABOUT THIS! Will you tell us a little more about Henry Lambert and Strongwoods Survival Camp?
Henry Lambert is a sixteen-year-old who is very good at video games, but not so good at surviving out in the middle of the woods. Strongwoods Survival Camp itself is not the gold standard of survival camps. It’s poorly attended, there’s only one counselor (and he’s kind of insane), the food is very, very, very bad, and the outhouse is a place of sheer terror. You wouldn’t want to send your kids there. But hopefully it makes for a funny book.

Why do you think readers will root for Henry?
He never really wanted to go to survival camp, and it’s definitely not suited to his personal skill set…but he’s still upbeat and tries to do his best. He’s snarky but not mean. And when things turn genuinely dangerous, well, he may just rise to the challenge! Also, just like Katniss Everdeen, his weapon of choice is a crossbow, so the Hunger Games audience will totally be on his side.

What did you enjoy most about writing BAD FEELING?
The opportunity for unrestrained silliness. When I turned in my previous YA novel, A BAD DAY FOR VOODOO, to my editor, there was definite concern that she’d scream “What have you done???” right before her head exploded. But she loved it. So it was fun to be able to go absolutely nuts again, even though the insanity level of this one is scaled back and it has a more traditional narrative structure.

What is your writing process like? Are you an outliner or a seat-of-your-pantser?
Unless the publisher requires a full outline beforehand (as with DWELLER and WOLF HUNT) I’m more of a seat-of-my-pantser, although I like to have a general idea of where the story is going to go. For BAD FEELING, I knew before I started writing that the first half of the book would be a series of funny sequences where Henry and the other campers try and fail at the various survival camp challenges, and that the second half would be the camp under siege by gangsters. I didn’t know the ending, but, let’s face it, this is a goofy young adult comedy, so the Teenagers vs. Gangsters battle probably wasn’t going to end with all of the kids lying dead in the woods.

What do you enjoy most about writing for a young audience?
My favorite part is getting fan mail from kids who don’t like to read (or at least don’t THINK they like to read) but who really enjoyed A BAD DAY FOR VOODOO. I don’t write with reluctant readers in mind, but much of the success of VOODOO came from cool librarians who said, “Hey, you’ll like this one! A teacher’s leg explodes in the second chapter!”

You’ve got quite a few scary titles under your belt, but what is something that you find truly terrifying?
The breakdown of society. I live in Florida, so we’ve got hurricane season every year, and you see horrible footage of flooding and homes being destroyed. One of the moments that freaked me out the most, though, was simply watching the local news in the middle of one of the hurricanes, and the newscasters didn’t know that they were live, and for about three minutes you could see and hear them calmly discussing the upcoming broadcast. If this had gone on for just ten seconds or so, my reaction would’ve been “Ha-ha, they don’t know the camera’s on!” but after a minute it became genuinely creepy. “We’re not supposed to be seeing this! Why doesn’t anybody notice what’s going on? What’s happening?” 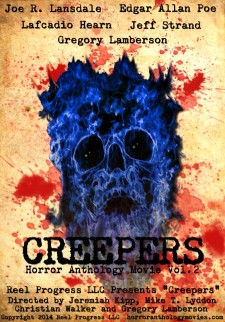 What’s one of your all-time favorite scary books or movies?
The original Texas Chainsaw Massacre is still the scariest movie I’ve ever seen. The first time I saw it was on VHS, on a small TV, in daylight, with my friends talking through the whole thing, and it was STILL unbelievably riveting. Leatherface slamming the sliding metal door is the single most frightening moment in horror cinema. The books that mess with me tend to me more “disturbing” than “scary,” like Jack Ketchum’s THE GIRL NEXT DOOR.

Speaking of which, have you read any good books lately?
I’d read David Wong’s JOHN DIES AT THE END for a blurb before it was published and absolutely loved it, and I bought the hardcover edition of the sequel as soon as it was published…and, yet, somehow, for no reason that I can explain, it took me over a year to finally read THIS BOOK IS FULL OF SPIDERS. And it’s even better than the first book. Horror/comedy at its best. Recently, I’ve also really enjoyed THE DINNER by Herman Koch and EMPEROR MOLLUSK VERSUS THE SINISTER BRAIN by A. Lee Martinez.

Have you ever bought a book just for the cover? If so, which one?
Almost never. I have decided NOT to buy a book because of the cover (even though I’ve had some bad covers myself!) but it’s very rare that the cover alone finalizes the decision. Honestly, the only example I can think of is SHERRY by Alan Spencer, because the cover purposely looks like it was drawn by an 8-year-old, and I had a moment of “What is THIS supposed to be?” and bought the book. The cover for THE SCHOOL THAT SCREAMED made me think, “Whoa! I need to read this!” but I like the author (William Carl) so I would’ve read it anyway.

What’s next for you this year and beyond?
By the time this interview goes up, shooting should be complete on “Gave Up The Ghost,” a short film I wrote, directed by Gregory Lamberson. It will be included in the horror anthology film CREEPERS, which also has adaptations of work by Joe Lansdale, Edgar Allan Poe, and and Lafcadio Hearn. I have an extremely weird new novella being published by DarkFuse in December, and I’m also hoping to have WOLF HUNT 2 out by year end. Plus a couple of other things!

About I HAVE A BAD FEELING ABOUT THIS:
Wilderness Survival Tip #1

Drinking your own sweat will not save your life. Somebody might have told you that, but they were trying to find out if you’d really do it.

Henry Lambert would rather play video games than spend time in the great outdoors—but that doesn’t make him a wuss. Skinny nerd? Fine. But wuss is a little harsh. Sadly, his dad doesn’t agree. Which is why Henry is being shipped off to Strongwoods Survival Camp.

Strongwoods isn’t exactly as advertised. It looks like the victim of a zombie apocalypse, the “camp director” is a psycho drill sergeant, and Henry’s sure he saw a sign written in blood…

In case of an avalanche, don’t despair. You’re doomed, but that’s a wicked cool death.

If you’re relying on this book for actual survival tips, you’re dead already.