I had the pleasure of reviewing Shovel Ready by Adam Sternbergh for Library Journal, and am thrilled to have Adam on the blog. He was kind enough to answer a few of my questions about the book, and much more! 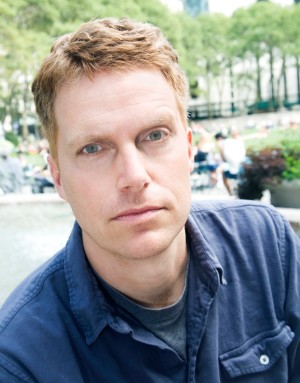 Congrats on a fantastic debut, SHOVEL READY! You have a journalism background, but what made you decide to jump into fiction? Will you tell us a little about that progression?
Thanks so much! I’ve always written fiction, even when I was a kid — I wrote a short story in eighth grade about a private detective named Hades Valentine, which seemed to me like the most supercool name at the time. The journalism part came after college, after I had worked on my school newspaper and got involved in writing for magazines. But I continued working on fiction on the side, more or less in secret — kind of like the guy who obsessively works on building a huge model railroad in his basement, painstakingly, out of sight, tree by tree.

What, in particular, inspired you to write SHOVEL READY?
It was two things: One, I arrived in New York City in 2004 to work at New York magazine, and a lot of my early journalistic work was about the huge transformations going on in the city. New York was both post-9/11 but also in the middle of an improbable economic renaissance, that would have seemed unimaginable back in the 70s or 80s. And there was (and still is) a lot of talk in the city about what all these changes mean — what the city is gaining, and losing, in return. All of which got me thinking about what it would take to return New York to its infamous 1970s incarnation — what we remember as this desolate, lawless, chaotic metropolis that thrummed with a very different kind of energy.

The other inspiration was a realization I had, very late in my writing career, about what kind of books I really enjoyed. I read pretty widely as a rule (I like to think) but, as a writer, I had never really given myself permission to experiment in the forms I like the most: noir, hardboiled fiction, speculative fiction, thrillers, and so on. When it dawned on me that my thought experiment about a relapsed, desolate New York might be a promising backdrop to a hardboiled mystery, the story of Spademan, and SHOVEL READY, was born.

Spademan, at first, is a ruthless hitman, only wanting to know the who, but not the why of his targets. He has a few rules, but for the most part, anything is up for grabs. However, as the book unfolds, so does his background, and it reveals why he became what he is. Did you plan to make him a sympathetic character from the beginning?
I did — I felt like, if you’re going to spend a whole book with this guy, you need to get inside his head, learn something about his background and motivations, and eventually start to understand how that makes him more sympathetic. Perhaps surprisingly, I’m a bit of a softie when it comes to really hardboiled characters — I often get fed up with characters who are relentlessly grizzled, unsentimental and tough. (I’m thinking here of, say, Mickey Spillane’s Mike Hammer.) I’m very happy if a character is dark — and Spademan is pretty dark — but I also want to know where that darkness comes from. The answer is usually pain. And pain, in turn, once it’s revealed, can make even the most hard-case character sympathetic. 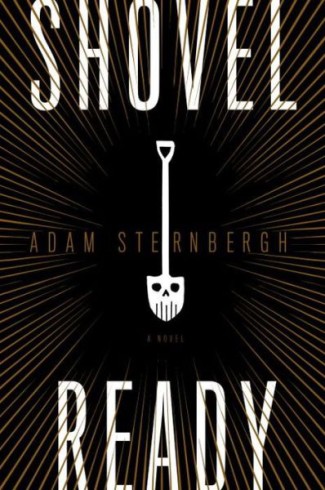 A crumbling New York City is the setting for the novel, and is a very important part of it. Was it always NYC, or did you consider other settings?
It was always NYC, mostly because the city is so mythic in a unique way. I’ve lived in actual New York for ten years now, but the New York City I grew up with (while living as a kid in Toronto) was a wondrous and mysterious and frightening place that I knew only from movies and TV. It was the New York of “The Warriors” or “Fort Apache: The Bronx” or even “Escape from New York” — not movies I actually saw (I was far too young) but that had somehow leaked into my consciousness. I still think of New York in that way — there’s the actual physical city where I work and live and, you know, do grocery shopping and stuff. And then there’s quote-unquote “New York City” — which is kind of like the American version of the Emerald City from “The Wizard of Oz.” A place haunted by a hundred years of accumulated dreams and nightmares.

Did you do any specific research for the book?
I did a bit of research online as to what it’s like to be a garbageman, mostly for Spademan’s backstory. And I did enough research on, say, dirty bombs, to make sure that what I was proposing was at least plausible. Turns out is is — unnervingly so. I read a recent news story about a hijacked truck in Mexico carrying radioactive medical waste, and the fears that it could be used to build a crude dirty bomb. I was both relieved and freaked out to think: Okay, this could actually happen.

What did you enjoy most about writing SHOVEL READY, and what do you hope readers take away from it?
I started the book with more or less one goal in mind, which was this: Maximum pleasure. With every sentence, chapter, character and plot twist, I wanted to make the choices that would provide the most thrills for the reader. That might sound corny, but I do think, especially when you’re working in a more so-called literary style, it’s easy to forget that readerly pleasure is even a consideration, let alone a primary goal. For example: I choose the very short, telegramatic style of the book because I personally get great pleasure from word play, interesting juxtapositions and sharp, distilled descriptions — it’s why I like hardboiled writing in the first place. So there were moments when I’d think: Maybe I don’t really need to describe this whole streetscape, but if I can do it in a few sentences that I find very pleasurable, then it’s worth doing. Similarly, at certain junctions of the plot, I’d think: Well, what’s the most extreme choice here? And I’d choose that, just to see where it would take me. And that turned out to be really fun.

Which authors have inspired you the most in your writing?
I mostly gravitate to aggressive stylists: whether it’s famous minimalists like Ernest Hemingway or Joan Didion or egregious maximalists like William Faulkner or Martin Amis. Raymond Chandler once said that “style is the most valuable investment a writer can make with his time,” and I find, as a reader, I’m primarily attracted to style, to sentence-by-sentence pleasure, rather than, say, plot. (Though I do love a great breakneck story.) But I’d much rather read a familiar story, thrillingly and innovatively told, than a completely original story, boringly told. In the books I love the best, even ones I’ve read multiple times, I might not be able to recount exactly what happens in the story. But I can definitely recite favorite sentences.

If you could experience one book again for the first time, which one would it be?
Whoa — good question. That’s a tough one. I wish I could read “Slaughterhouse Five” for the first time, in a total vacuum, without some of the attendant baggage that comes from snobbish people who offhandedly dismiss Kurt Vonnegut. I feel like that book is such a daring collision of heartfelt pain and swashbuckling experimentation, and it’s a shame that we’re kind of taught over time (by some people) to turn our noses up at it. I also which I could travel back in time and read a Chandler or Hemingway book without knowing anything about it (speaking of writers with baggage). Both of them have been so imitated and parodied that it would be great to encounter either one with no pretext.

When you’re not writing, how do you like to spend your free time?
Reading. And beyond that, it feels like a real luxury to take a really long bike ride in the city. Writing, reading, biking, those are the big three — and there’s usually no free time left over after that.

I read that you’re working on another Spademan novel…any hints as to what we can expect (not fishing for details at all;)?
I am — the best hint I can give is that it’s a sequel to the first book, that takes place about a year after the end of SHOVEL READY. So once you’ve read SHOVEL READY, you can imagine what sort of lingering unresolved complications might crop up for Spademan and company. Plus, there are a few new surprises as well.

Is there anything else that you’d like to share?
Just a thank-you to everyone out there who takes the time to check out SHOVEL READY, since I know the universe of books is vast, and the time to read is short. It’s a great privilege to put a book into the world, and even more of one to know someone out there is enjoying it. And, of course, thanks to My Bookish Ways!

About SHOVEL READY:
The futuristic hardboiled noir that Lauren Beukes calls “sharp as a paper-cut” about a garbage man turned kill-for-hire.

Spademan used to be a garbage man. That was before the dirty bomb hit Times Square, before his wife was killed, and before the city became a blown-out shell of its former self.

In a near-future New York City split between those who are wealthy enough to “tap in” to a sophisticated virtual reality, and those who are left to fend for themselves in the ravaged streets, Spademan chose the streets. His new job is not that different from his old one: waste disposal is waste disposal. He doesn’t ask questions, he works quickly, and he’s handy with a box cutter. But when his latest client hires him to kill the daughter of a powerful evangelist, his unadorned life is upended: his mark has a shocking secret and his client has a sordid agenda far beyond a simple kill. Spademan must navigate between these two worlds—the wasteland reality and the slick fantasy—to finish his job, clear his conscience, and make sure he’s not the one who winds up in the ground.