Paul Kearney is the author of The Monarchies of God,Sea Beggar, and The Macht series, and his fantasy, A Different Kingdom, was recently reissued by Solaris! Paul was kind enough to answer a few questions about the book! 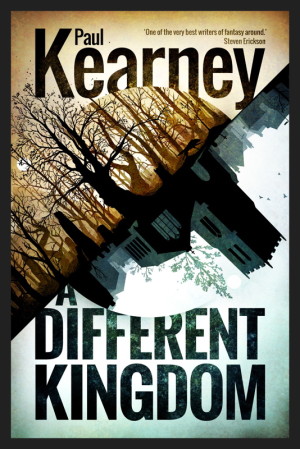 Paul, I’m so glad that Solaris reissued A DIFFERENT KINGDOM because I might have not discovered it, and that would have been a loss. It’s beautifully written, and I absolutely loved it! Will you tell our readers a little about the book, in your words and what first inspired you to write it?
A Different Kingdom was conceived on two levels. Firstly, it is a love story – almost a love triangle in fact. The hero, Michael, is in a strange and not altogether wholesome way in love with his young aunt. And later on, as he grows up, he falls in love with a beautiful, feral, not-quite-human girl from the woodland. The book deals with the knotty problems of sex and adolescence, set against a world which is itself on the cusp of massive change.

And therein lies the second strand within the novel. It is in some ways an elegy to a vanished world, a world I grew up in during the early 1970’s, but which, in my corner of Ulster at least, had not changed much in twenty years. It was a slow-paced, conservative, intensely family-orientated existence, and in Kingdom I described it pretty much as I experienced it. The farmhouse, the fields, the woods, the rivers; even the characters; they are based on reality. There really was a dog called Demon lurking under the kitchen table, a little river spanned by a deep stone bridge, and an acres-wide stretch of woodland where we played endlessly, and learned as children not to fear the dark. The only difference (apart from the wolves!) was that there were lots of us. I come from a huge family, and if I were to tell the story of my childhood with complete faithfulness, it would read more like the Secret Seven.

I grew up in rural Northern Ireland, and had one of the best childhoods that could have been conceived. My family were farmers and butchers, dealers in horses and cattle who were bound to the land. I grew up riding horses the way some kids ride bicycles – I was first placed on a horse’s back aged two.

I was a reader though– and I went to university, which was highly unusual. I went to Oxford, which was quite frankly weird. After Oxford I went to Sandhurst, Britain’s equivalent of West Point. By then I felt more English than Irish, and it wasn’t until I received a letter from a London agent, interested in a book I’d written, that I paused and began to reconsider what to do with my life. (The book had been sent to him, without my knowledge, by a good friend who thought I was wasting my time in uniform).

So, I threw it all up and began to write, full-time. That was twenty-three years ago. And I’ve been writing ever since. 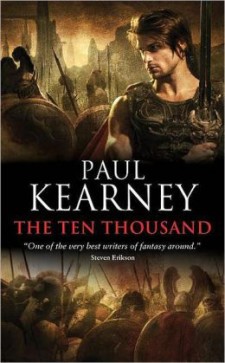 Why fantasy, and what do you enjoy most about writing in the genre?
I had no choice about writing fantasy, any more than the salmon has a choice about leaping upstream. The ideas I had in my head all had the element of the fantastic about them – it was just the way my particular imagination worked. To be honest, until I was twenty years old or so, all my leisure reading was fantasy or science fiction (as opposed to what I had to read for college).

Now that I’ve been doing what I do for over two decades, I can dabble in other genres quite happily (I’ve written three military thrillers under a pseudonym), but fantasy, or something like it, always drags me back in. Though to be fair, the Macht series was pure science fiction in the mould of Robert E Howard.

I like the possibilities involved. Perhaps I’m lazy – too lazy to stick to the physics and politics of our own grubby little world. I do not write escapist fantasy – far from it – but I like to know that I can invent anything I want. I love that freedom.

What is your writing process like? Are you a plotter or do you enjoy seeing where the narrative takes you?
I send in a synopsis to a publisher, detailing exactly what I am going to do, and then as soon as I sign the contract, I forget about it and pretty much make it all up as I go along. If I knew exactly how every chapter was going to turn out before I wrote it, then it would be about as much fun as filling in a tax return. I remember at the end of the Monarchies series – that final, apocalyptic battle – and I genuinely had no idea how it would turn out. It was a massive thrill to be able to write like that, to finish off that series, which had taken me seven years to write, just in any way that seemed right, without constraint.

Not many writers work that way, and more power to their elbow. But for me it is one of the things which make writing worthwhile – more than that – it can make it extraordinary; a visceral, almost physical thrill.

What are a few authors or novels that have especially influenced you in your work, and your life?
I’m on record as a massive fan of Cormac McCarthy and Patrick O Brian. McCarthy for the pure, unadulterated beauty of his language; O Brian for his sheer humanity – he is one of the very few authors who can make me laugh out loud. To that list I would add Rosemary Sutcliff and Mary Renault, who along with O Brian wrote the best historical novels ever written. But Tolkien was what really kick-started me into writing my own stories and creating my own worlds. He showed me how. It was because of him that I applied to Oxford, studied Old Norse, and started smoking a pipe. He has a lot to answer for!

What are you reading now?
I always have several books on the go at one time – especially now that I have moved into the current century and got myself a Kindle Fire. I just finished Dracula, for the third time. Superb opening, awful ending. I’m also reading Nigel Cliff’s book about the voyages of Vasco da Gama, and I just finished One Night in Sixes, by Arianne Thompson, which was excellent. (But it ain’t published yet). 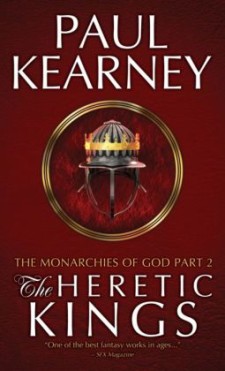 When you’re not working on your next project, how do you like to spend your free time?
I have two dogs, Jack Russells named Pip and Monty, who take up more of my time than I would care to reveal. As I write one is curled up asleep at my feet and the other is busy savaging something in the kitchen.

I have a very battered boat that I like to take out now and again (I live on a beach, and we are suffering an endless succession of storms. The roof has been stripped of a chunk of tiles twice so far this winter, and the road to the house has been washed away once.)

When circumstances permit, I like to get together with a well-worn group of friends and relations – there are usually at least six of us – and we camp out for the weekend in the same forest which inspired Kingdom. The same forest we grew up in.

We pitch tarps, not tents. We light a fire, carve spoons, drink malt whisky, and talk trash. Sensible, middle-aged chaps though we all are by now, we still feel the need to do this at least twice a year, and it’s shocking just how much planning is involved now that all our lives have become more complicated. (i.e. we have grown up – more’s the pity).

What’s next for you in 2014?
I’m writing a book called Umbra Sumus for the Black Library, about Space Marines – something I’ve longed to do since Games Workshop first invented them, back in the eighties. They’ve let me design my own Chapter, which has been enormous fun. It’ll be out in the autumn I think.

Also, I’m talking to Solaris about finally closing that gaping wound in my authorial psyche which is called the Sea Beggars. But we’ll have to see what happens with that one. There are lawyers involved…

About A DIFFERENT KINGDOM:
Michael Fay is a normal boy, living with his grandparents on their family farm in rural Ireland. In the woods—once thought safe and well-explored—there are wolves; and other, stranger things. He keeps them from his family, even his Aunt Rose, his closest friend, until the day he finds himself in the Other Place. There are wild people, and terrible monsters, and a girl called Cat.

When the wolves follow him from the Other Place to his family’s doorstep, Michael must choose between locking the doors and looking away—or following Cat on an adventure that may take an entire lifetime in the Other Place. He will become a man, and a warrior, and confront the Devil himself: the terrible Dark Horseman…