Please welcome Cecil Castellucci to the blog! I loved her new book, TIN STAR, and she was kind enough to answer a few questions about the book, and more! We’ve also got a copy of the book up for grabs, so be sure to check out the details at the end of the post!

Also, be sure to check out her other blog tour dates! 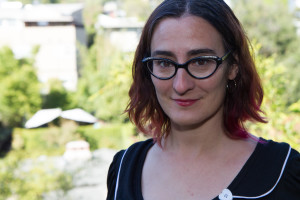 Cecil, congrats on your new book, TIN STAR! Will you tell us a bit about yourself and your background? Have you always wanted to be a writer?
Hello! Thanks for having me here! My name is Cecil Castellucci and I am the author of both young adult novels and graphic novels. I grew up in New York City and attended the LaGuardia High School for the Arts aka the Fame school. I love outer space, Star Wars and caviar. My first novel was called BOY PROOF and it was about a girl named Egg who is obsessed with post apocalyptic science fiction films and dresses up as the main character from her favorite film to go to school. To date most of my novels have been contemporary, with the exception of FIRST DAY ON EARTH which may or may not be a science fiction novel depending on how you choose to read it. It’s about a boy who thinks he’s been abducted by aliens. THE YEAR THE BEASTS, is a hybrid novel meaning it’s part prose part comic book and it was illustrated by the amazing Nate Powell. The neat thing with that book is that you can read just the prose or just the comics and get a story, but if you read them together you get the whole story. Some of my other comics work includes THE PLAIN JANES, illustrated by Jim Rugg, about an all girl guerilla art group doing art attacks in their town which was out on DC Comics and ODD DUCK, illustrated by Sara Varon, about two delightfully odd ducks named Chad and Theodora. And last year I wrote a Valentine’s Day short story about Aquaman which was swoony, watery, and cool!

To answer your question, I have always wanted to be a writer ever since I saw Star Wars, so it’s been a real girlish dream of mine to write a story that takes place in outer space with aliens. I think it took me a while to get there because I wanted it to be the right character and the right story. Tula Bane was that character. 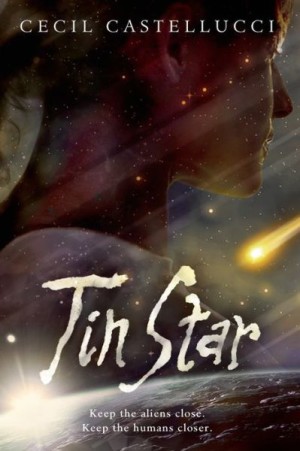 Tin Star is about Tula Bane, a 14 year old girl abandoned on a space station. Will you tell us more about Tula and Tin Star, and what inspired the story?
I was inspired to write the story when I was having one of those “let’s watch black and white movies and eat ice cream” binges. I’d popped in Casablanca and I was really struck about how the city is a place that holds onto its characters and is a character, too. So many people are trapped there because of the war and can’t get out. It’s a strange limbo there that creates all kinds of new rules for the people who inhabit it. I thought about how that could just as easily be a space station at the edge of the known galaxy.

But it was when I thought up Tula Bane it was because I wondered what it would be like if you were the only human stuck in a place like that. How would you shed and retain your humanity? So using Casablanca as a spring board, I jumped from there. In my mind, Tula is more Rick than Elsa, so it’s a bit of a gender switch. Tula to me is a very resourceful and savvy girl with an extreme will to live. She’s fixated on the man who abandoned her, the charismatic cult leader Brother Blue, but that’s not the only thing that drives her in the end. I wanted to write a character who has to figure out how to survive by sort of becoming an alien herself and then having to remember who she is. I also wanted to have a character who wasn’t chosen, or exceptionally strong. I wanted to write a character who has to decide whether or not to live by using the very little she has at her disposal. The odds are against her.

I love the world that you’ve built in Tin Star! What are a few of your favorite “worlds” in fiction?
Oh! So many! I’ll stick to books otherwise I’ll just keep naming things. I loved LOGAN’S RUN when I was growing up. Asimov’s FOUNDATION series. DUNE by Frank Herbert got me all goose bumpy. THE TRIPOD TRILOGY by John Christopher blew my 11 year old mind. I was really captured by the story by A CITIZEN OF THE GALAXY by Robert Heinlein. Of course Marvin the Robot and the immense universe in HITCHHIKER’S GUIDE TO THE GALAXY was a favorite. Anything and everything by Ursula K Leguin and her worlds. What a master! Stanislew Lem’s SOLARIS. Seriously, there are so many worlds that I love. I’m not even scratching the surface here. 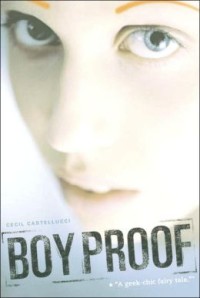 What do you enjoy most about reading, and writing, science fiction?
There are so many things to love about both reading and writing science fiction. I think the possibility of expanding your known world is one thing that is compelling. I think the fact that it has the potential of talking about and commenting about charged things currently happening in society and culture is interesting. I feel like when I discovered science fiction (and fantasy), it was a safe way to explore alternative view points about politics and culture. Also, there is outer space! I think the idea of exploration and contact is something that I crave.

You have a long list of children’s and young adult titles to your credit. What do you enjoy most about writing for
young adults.
One thing about writing for young adults that I think any YA author you ask will say / agree with is that it’s a time where characters are experiencing things for the first time. First love, betrayal, rage – everything is a first. They are opening their eyes to what it is to be a person in the world and everything is right under the skin. Everything is life and death, even if it’s who you sit next to at lunch! So it’s this time of becoming who you are. I think that is very interesting as a writer and I think it’s what is enjoyable. These characters, as they come of age, are very fertile ground for narrative. They are irresistible. That’s what I love about writing for young adults, it’s a wide open field of everything. All possible outcomes all of the time.

What do you hope to see readers take away from Tin Star?
I hope that they take away that there is more to Tula than her seemingly alien ways. And that in a way, it is a meditation on how someone who has lost their humanity can relocate it. I hope that they can see that there is a bigger story here that finishes in book two, A STONE IN THE SKY. 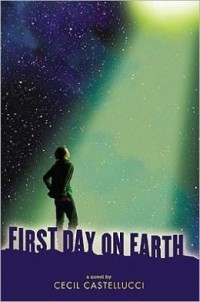 Have there been any authors or novels that have influenced you more than others?
Of course! But this list is ever changing and if asked one day to the next will be a different list. I love Jane Austen. I think her wit and humor and observations are marvelous. James Tiptree, Jr is a golden age Sci Fi writer who I adore. She was a woman who wrote as a man and her story The Girl Who Was Plugged In is one my favorites.

If you could experience one book again for the first time, which one would it be?
You know, it’s funny. I was just at a conference for young people’s literature and over dinner a bunch of us were talking about movies that were not really good adaptations of the books they were based on. I don’t know that this book is the be all end all of my life. I mean, I know it’s not. But the experience of reading it was so tremendous that I will give it the props for this question. When I read ELLA ENCHANTED by Gail Carson Levine I had no idea that it was based on Cinderella. I closed the book and opened it back up and reread it again immediately after finishing it. That was a great feeling.

You’ve undoubtedly influenced many writers with your work. What’s one piece of advice that you would give to an aspiring author?
Always try to have your best ears on so that you can hear what is not working in your piece and so that you can remain open enough to do the work needed to take your piece to a higher level. Also, anything that you love that you have to throw out you can use in another thing down the line. I say, “use every part of the buffalo.” (that’s not me. I think it’s a Native American. But it’s so true for art!)

What’s next for you?
Well, book two, A STONE IN THE SKY which finishes off Tula Bane’s story comes out in 2015. And I also have a graphic novel called PEARL IN THE ROUGH, illustrated by Joe Infurnari. It’s about a girl who dresses up as a boy and meets an old hobo and rides the rails in 1932. It’ll be out on Dark Horse Comics in 2015.

1.) You MUST fill out the form below (if you’ve signed into Rafflecopter before, it will remember you!)
2.) Giveaway is for 1 copy of TIN STAR by Cecil Castellucci to 1 winner
3.) Giveaway is open to all with a US or Canadian mailing address (no PO boxes)
4.) You must enter on or before 2/25/14
5.) Giveaway book courtesy of Macmillan
6.) Please see my Giveaway Policy.

About TIN STAR:
On their way to start a new life, Tula and her family travel on the Prairie Rose, a colony ship headed to a planet in the outer reaches of the galaxy. All is going well until the ship makes a stop at a remote space station, the Yertina Feray, and the colonist’s leader, Brother Blue, beats Tula within an inch of her life. An alien, Heckleck, saves her and teaches her the ways of life on the space station.

When three humans crash land onto the station, Tula’s desire for escape becomes irresistible, and her desire for companionship becomes unavoidable. But just as Tula begins to concoct a plan to get off the space station and kill Brother Blue, everything goes awry, and suddenly romance is the farthest thing from her mind.