Excerpt: The Troop by Nick Cutter

THE TROOP by Nick Cutter will be out on the 25th, but until then (courtesy of Gallery Books), I’ve got Chapter 1 for you to sink your teeth into! 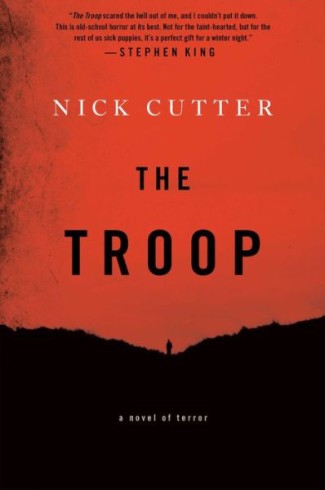 The boat skipped over the waves, the drone of its motor trailing across the Gulf of Saint Lawrence. The moon was a bone fishhook in the clear October sky.

The man was wet from the spray that kicked over the gunwale. The outline of his body was visible under his drenched clothes. He easily could have been mistaken for a scarecrow left carelessly unattended in a farmer’s field, stuffing torn out by scavenging animals.

He’d stolen the boat from a dock at North Point, at the farthest tip of Prince Edward Island, reaching the dock in a truck he’d hotwired in a diner parking lot.

Christ, he was hungry. He’d eaten so much at that roadside diner that he’d ruptured his stomach lining—the contents of his guts were right now leaking through the split tissue, into the crevices between his organs. He wasn’t aware of that fact, though, and wouldn’t care much anyway in his current state. It’d felt so good to fill the empty space inside of him . . . but it was like dumping dirt down a bottomless hole: you could throw shovelful after shovelful, yet it made not the slightest difference.

Fifty miles back, he’d stopped at the side of the road, having spotted a raccoon carcass in the ditch. Torn open, spine gleaming through its fur. It had taken great effort to not jam the transmission collar into park, go crawling into the ditch, and . . .

He hadn’t done that. He was still human, after all.

The hunger pangs would stop, he assured himself. His stomach could only hold so much—wasn’t that, like, a scientific fact? But this was unlike anything he’d ever known.

Images zipped through his head, slideshow style: his favorite foods lovingly presented, glistening and overplumped and too perfect, ripped from the glossy pages of Bon Appétit—a leering parody of food, freakishly sexual, hyperstylized, and lewd.

He saw cherries spilling from a wedge of flaky pie, each one nursed to a giddy plumpness, looking like a mess of avulsed bloodshot eyeballs dolloped with a towering cone of whipped cream . . .

A porterhouse thick as a dictionary, shank bone winking from fat-marbled meat charred to crackly doneness, a pat of herbed butter melting overtop; the meat almost sighs as the knife hacks through it, cooked flesh parting with the deference of smoothly oiled doors . . .

What wouldn’t he eat now? He yearned for that raccoon. If it were here now, he’d rip the hardened rags of sinew off its tattered fur; he’d crush its skull and sift through the splinters for its brain, which would be as delicious as the nut-meat of a walnut.

Why hadn’t he just eaten the fucking thing?

Would they come for him? He figured so. He was their failure—a human blooper reel—but also the keeper of their secret. And he was so, so toxic. At least, that’s what he overheard them say.

He didn’t wish to hurt anyone. The possibility that he may already have done so left him heartsick. What was it that Edgerton had said?

If this gets out, it’ll make Typhoid Mary look like Mary Poppins.

He was not an evil man. He’d simply been trapped and had done what any man in his position might do: he’d run. And they were coming for him. Would they try to capture him, return him to Edgerton? He wondered if they’d dare do that now.

He wasn’t going back. He’d hide and stay hidden.

He doubled over, nearly spilling over the side, hunger pangs gnawing into his gut. He blinked stinging tears out of his eyes and saw a dot of light dancing on the horizon.

An island? A fire?

About THE TROOP:
Once every year, Scoutmaster Tim Riggs leads a troop of boys into the Canadian wilderness for a weekend camping trip—a tradition as comforting and reliable as a good ghost story around a roaring bonfre. Te boys are a tight-knit crew. Tere’s Kent, one of the most popular kids in school; Ephraim and Max, also well-liked and easygoing; then there’s Newt the nerd and Shelley the odd duck. For the most part, they all get along and are happy to be there—which makes Scoutmaster Tim’s job a little easier. But for some reason, he can’t shake the feeling that something strange is in the air this year. Something waiting in the darkness. Something wicked . . .

It comes to them in the night. An unexpected intruder, stumbling upon their campsite like a wild animal. He is shockingly thin, disturbingly pale, and voraciously hungry—a man in unspeakable torment who exposes Tim and the boys to something far more frightening than any ghost story. Within his body is a bioengineered nightmare, a horror that spreads faster than fear. One by one, the boys will do things no person could ever imagine.

And so it begins. An agonizing weekend in the wilderness. A harrowing struggle for survival. No possible escape from the elements, the infected . . . or one another.