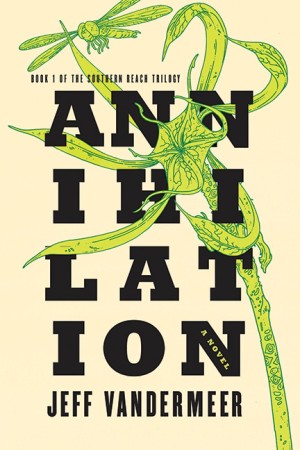 “Desolation tries to colonize you.”

For the first time in more than two years, an expedition (the 12th, the group is told) is headed into Area X. The team consists of four women: a biologist (who narrates), an anthropologist, a psychologist, and a surveyor. They’ve got a few firearms, ample supplies, and each have been given a mysterious black device with a glass covered hole in the middle. If that hole glows red, they are to get to a safe place, immediately. They’ve been sent to Area X to uncover its secrets, and perhaps to explain the (so far) unexplainable. Many teams came before them. Some didn’t make it out, and some did, but were irrevocably changed, and worse. Soon after crossing over the border (under hypnosis), they come across a tunnel burrowing straight down into the ground, but what the unnamed narrator can’t help but think of as the tower. Why she can’t bring herself to call it anything but a tower, she doesn’t know, but when the team starts the descent into the tower, they find something very unusual, and ultimately, terrifying. When the biologist comes in contact with an unknown substance, it begins to change her, and she starts to suspect that Southern Reach, the organization that sent them to Area X, may not have the group’s best interests at heart.

Area X is lush, beautiful, and completely abandoned, except for the new expedition, or so they think at first. At dusk, the group hears a low moaning that may or may not be animal in nature, and in fact, mounting evidence points distinctly to “other.” Somehow, the biologist knows that the tower is very important, and that eventually she’ll have to plumb its depths, but first, she’s drawn to the lighthouse that features prominently in many of the previous expeditions’ accounts. It’s there that she discovers evidence of shocking violence, and when she finally goes back to the tower, frightening, and deadly, beauty.

Although we never learn the biologist’s name, we do learn a little about her life before Area X, and she soon discovers, within herself, that the control that she’s always been known for is a farce, and it has no place in Area X. In fact, Area X is the very epitome of biology run amok, and yet, for all of its strangeness, it begins to make a chaotic sort of sense to her. The secret lies in the tower, and she knows she must confront it, even if it means her death, and confront it she does, with shocking results.

It’s been a long time since a book creeped me out quite this much. It reminded me a bit of The Ruins by Scott Smith, but only in the sense that the horror of Area X is very organic, and the biologist’s descriptions of tidal pools and the organisms that dwell there only served to heighten my terror and fascination. Annihilation is as much psychological study as it is horror, and horror it most certainly is, of the best kind. Vandermeer’s uneasy narrative has that pull that makes you want to go down into that tower with the team, even though you know that would be a very, very bad idea, and he’s created such a fully realized environment, within Area X, that he could certainly go well beyond a trilogy. This is also horror with a bit of a message, although it’s certainly not heavy handed, but it’s there, and it’s a good one. The lighthouse was what did it for me, ultimately. Yeah, the tower is weird and scary and there are things down there that will cause any sane person to curl up in a fetal position and will themselves to die, but it was the silent testament to violence at the lighthouse that really sent chills down my spine. I don’t know why, but for me, monsters are one thing, but it’s horror with a human element that really gets to me the most. I made the mistake of reading this on my Kindle with a light up screen in the dark, and I found myself jumping at any small noise. So, don’t do that, unless, you know, you like that sort of thing (like I kind of do, I admit it.) This was a short read, but it packs a helluva punch. The matter-of-fact narrative (it’s a journal-and she’s a scientist- after all, and Southern Reach asked for maximum context) actually adds to the creep factor of the story, which is already at a 10, although there are passages of uncanny beauty. However, I still got a sense of her sadness, of her conviction that she had nothing to return to, which of course added a melancholy, even fatalistic tone to her story.

ANNIHILATION is psychological, and organic, horror and mystery at its very, very best, from a master of his craft. Vandermeer’s ability to create wonder amidst terror is awesome (in the classic sense of the word), and I can’t wait to return to Area X in May with AUTHORITY.

**FSG, by the way, knows how to add to the awesome of this book with their ANNIHILATION page. All kinds of great extras to be found (a map!!!).