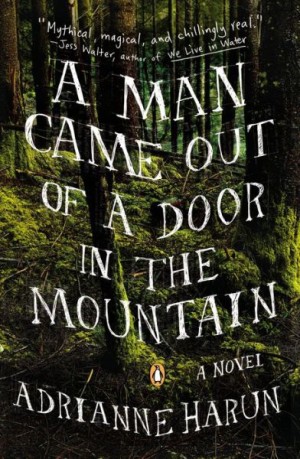 A Man Came Out of a Door in the Mountain by Adrianne Harun (Penguin,Feb. 25th)-A Man Came Out of a Door In the Mountain is mostly told in the voice of Leo Kreutzer, a teen that lives with his mother and ailing Uncle Lud, to whom he is a caretaker, along with his mother. For the most part, life is a struggle for Leo and his friends Bryan, Tessa, Ursie, and Jackie. They spend a lot of their days at the refuse dump, shooting rats, and Leo’s life is punctuated by the correspondence course in physics that his mother is making him take, and the increasingly odd emails he’s getting from its instructor. Physics eludes him, but the trajectory of his friends’ lives does not. Leo’s Uncle Lud is a longtime storyteller, and it’s through these stories that Leo gains insight on the evil that seems to be lurking among them, especially in the form of an ethereally pale, unusually strong girl that calls herself Hana Swann. Then there’s Kevin Seven, a man that’s staying at the local motel and is especially gifted at sleight of hand. Ursie works as a maid there, and has fallen under his thrall and Jackie has fallen under the spell of Hana Swann. If you’re thinking this all sounds like so many loose ends, I suppose it does, but it does together in the end, in quite a shocking way.

The novel takes place in British Columbia, in a mining town pretty much run by Gerald Flacker, a man that keeps his meth addicted girlfriend submissive and her two small children feral and scrambling for handouts. It also helps that he has a family member on the police force and almost a whole family at his disposal in the form of the Nagles. As girls continue to disappear along the highway, Flacker maintains a hold on one of Leo’s friends, Bryan, but Bryan is starting to form a plan to rid the town of its resident menace.

A Man Came Out of a Door in the Mountain is not a straightforward mystery, or thriller. It really isn’t a straightforward anything, but what it is, is entrancing. It magnifies mountain life down to the smallest, most squalid details and you’ll get to know most of the characters intimately, yet with the sense that you’re being held at arm’s length. However, as bleak as things are, these kids are decent to their core and have hopes for the future. Even one of the Nagle boys longs to be a better man, and sees a shining beacon of hope in Tessa. The dash of magic realism adds an intriguing layer to an already richly layered, and beautifully written, almost poetic story, of hope, and evil, among the ruins. If you appreciate the work of authors like Stephen Dobyns, or really, just stories with prose that veritably sings, you’ll enjoy this one.