Fiction The Secret History of Las Vegas by Chris Abani

The Secret History of Las Vegas by Chris Abani 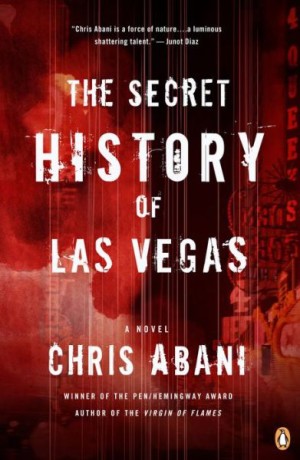 The Secret History of Las Vegas by Chris Abani (Penguin, Jan. 7th, 2014)-Over the course of a couple of years, the bodies of homeless men have been turning up along the shores of Lake Mead, right outside of Las Vegas. Not just one or two at a time, either, but piles of bodies. Detective Salazar has been working the case, and, on the cusp of retirement, he’s determined to put it to rest, as the last good thing he can do. All of the dead are a burden on his soul, but it’s one body that stood out the most, that of a red headed young girl, found amongst a pile of the dead. He’s soon called to the shores of Lake Mead again, where a park ranger has found conjoined twins in the lake, one seemingly holding the other under the water. A container full of blood is also found nearby. Not sure if he has attempted murder, suicide, or something else on his hands, Salazar calls in Dr. Sunil Singh, whose specialty lies in studying the nature of psychopaths. Little does Salazar know, Dr. Singh knows more about the body dumps than he’s letting on, and the twins, Fire and Water, are much more than they seem.

Chris Abani is the author of six novels and numerous works of poetry, and he’s won too many awards to count. The man is very accomplished, and is highly respected in the literary world, for good reason. The Secret History of Las Vegas is, on the surface, a mystery, but underneath lies a fascinating story of a complicated, and at his core, good man whose past haunts him and who continues to seek redemption, in spite of his current work. Sunil Singh’s studies on the nature of psychopaths aren’t exactly what anyone would call humane, and its intended applications are terrifying. Singh’s past in Apartheid era South Africa has instilled in him enough horror to last a lifetime, and the heartache that he carries for a lost love is an undercurrent in the sadness that follows him like a dark cloud. Singh doesn’t know what to think of the twins, but he does sense something else at work, and he hopes to get to the bottom of it. Singh’s past is about to catch up with him, and a desert showdown is on the horizon.

The narrative mainly follows Salazar and Singh, and delves into both of their pasts, but this is really Singh’s story. The book, however, begins with the story of the twins’ mother, their birth, and eventually, her death right before they are to join a sideshow, and the scenes with the twins were some of my favorites. There’s a distinct nourish feel and Salazar is appropriately gruff, but like Singh, there’s nothing simple about him either. The horrors of Apartheid are explored through Singh, but never gratuitously, always in a very matter of fact way and perhaps this was why, for me, it was so upsetting, especially his memories about the chilling Vlakplaas,which served as the headquarters of the South African Police counterinsurgency (C10) during Apartheid. Singh is a man shaped by his past, by much tragedy, and yet constantly hopes for brighter things. His love for a prostitute named Asia punctuates his sadness, and longing. Abani is a master of subtlety, and it’s the little things that are important in this novel. Abani’s exploration of racial identity are also a big part of this book, as are those of the nature of family, and even love.When I started the book, I never could have imagined how it would end, but I can tell you that it was surprising, and ultimately, very satisfying. Amongst so much darkness, there can still be hope, and light, and it’s on this note that the author leaves us. This is an unusual, fascinating, sometimes very creepy, and ultimitely optimistic novel, and it’s not to be missed.