It’s always a pleasure to have Adam Christopher on the blog, and today he’s here to celebrate the release of his brand new urban fantasy, HANG WIRE. I loved this one (my review), and courtesy of the lovely folks at Angry Robot, we’ve got a copy up for grabs, and it’s open internationally! Please welcome Adam back to the blog!

**Also, Adam is running a pretty killer Pre-order Contest (seriously, it’s massive), so be sure to go check that out too! 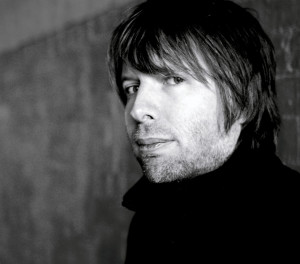 Adam, welcome back! Will you tell us a bit about your new book, HANG WIRE?
HANG WIRE is an urban fantasy set in San Francisco, a city terrorized by the Hang Wire Killer, a serial murderer who strings his victims up with steel cable. Meanwhile, local blogger Ted Hall’s birthday dinner goes awry when a fortune cookie explodes in his face, and since that night, he’s been experiencing lost time and blackouts. The circus has also arrived in town, but the Celtic dance troupe have started talking to the giant bonfire they light every night, while the manager of the fairground rides has started talking to his vintage machines.

Out in the city, a couple of immortals search for a lost power, while beneath the San Andreas fault, something primal begins to stir – a shapeless evil which, if fully woken, will destroy not just San Francisco, but perhaps the whole world.

The novel alternates, at various points, between present day San Francisco and various locations in the past. What kind of research did you do for the book, and what was one of the most interesting things you discovered?
This was a quite a research-heavy book, not just for the history and geography of San Francisco, but for the other narrative thread, being Joel’s journey across America through the 20th century. I’ve spent time in San Francisco – and fell in love with the place – so at least had a foundation to build on, aided by a lot of research and help on the ground from a couple of friends who not only kept an eye on geography for me, but also helped a lot with the whole feel of the piece, suggesting alternative places and positions for various things. I’m not a San Francisco native, nor have I lived there, and while I’m writing a work of fiction I think it’s important to pay attention to the details. I think I’ve captured the city pretty well – as I said, it’s a city I love (it reminds me a lot of Auckland, New Zealand, where I’m from), so it was a lot of fun to finally set something there.

Joel’s journey was an interesting one – it started by accident with a little intro chapter which then spawned a whole 20,000-word story-within-a-story that runs through the book. But there was something about Joel, the way he acted, his voice and his character. I’d like to do more with him at some point. I’m interested in forteana and weird events, and Joel finds himself at the nexus of such happenings at each of his appearances. Researching these was really interesting – especially the story of Madam Lalaurie’s mansion in New Orleans, which Joel finds himself in. There’s a whole other novel to be set in New Orleans of the early 20th century! Maybe I’ll get back to that some day. 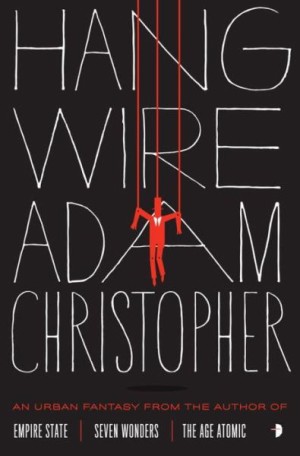 Hang Wire is a little bit of a departure for you-what inspired you to write it?
The idea came from my first trip to San Francisco – having enjoyed my time there so much, I knew I had to set a story there. The exploding fortune cookie which kicks the whole thing off actually happened to me, although perhaps not quite in the way it happens to Ted! But we went for dinner in Chinatown, we had prawns (that’s actually what they were on the menu – a couple of early readers have asked why I didn’t use “shrimp” in the book instead), we got fortune cookies, and mine burst open, throwing a handful of paper over the table! It was a factory fault, obviously, as not only were there dozens of fortunes packed inside, but they all said the same thing: YOU ARE THE MASTER OF EVERY SITUATION.

Clearly this was either a Silver Age superhero origin story… or perhaps something a little weirder!

I had always wanted to do a true urban fantasy – that is, the fantastical in an urban setting – so this seemed like a good place to start.

Will you tell us more about your protagonist, Ted Hall? Why do you think readers will root for him?
Ted is just an ordinary guy, way out of his depth. This is becoming something of a theme for my novels! Rad Bradley in EMPIRE STATE and Tony Prosdocimi in SEVEN WONDERS are they same – they’re dropped in the middle of the action, without a clue, and have to figure it out along with the reader. That’s the kind of fiction I enjoy to read and it makes a change from all-knowing heroes who are more in control of events than they probably should be.

So Ted is the Everyman. He’s nice. He works hard (but not too hard). He enjoys the company of friends (most of the time). He’d be a cool guy to hang out with, but he’s hardly the life-and-soul of the party. And his ordinary, staid existence is completely turned upside down, and he discovers the existence of a universe far larger and far weirder – and far more magical – than he even knew existed. So we follow Ted as he goes through hell, clues dropping here and there for both him and the reader to pick up on. I suspect it’s a case of who can figure out what happened to him first – Ted, or the reader!

Read any good books lately?
Plenty, actually – this year I’ve already read FUN & GAMES by Duane Swierczynski, which is amazing, ODDS ON by Michael Crichton as John Lange, recently republished by Hard Case Crime – it was cheesy, and sleazy, and hilarious, and great. At the moment I’m reading A MYSTERIOUS SOMETHING IN THE LIGHT, the new biography of Raymond Chandler by Tom Williams.

What was one of your favorite books of 2013?
This is tough, because I can’t separate them, so I’m going to pick two – AMERICAN ELSEWHERE by Robert Jackson Bennett and VICIOUS by VE Schwab. Two very different books, but they’re both beautifully written. I kinda hate those authors. Some people are too talented!

Any New Year’s Resolutions?
Rather than resolutions, I made two promises to myself: work harder, and work smarter. I’ve got a lot to do this year, and can’t afford to waste time. Something I’m a master of!

What’s next for you this year?
My fifth novel, THE BURNING DARK – the first in a loose series called the Spider Wars – is out from Tor (US) and Titan (UK) on March 25th. It’s a dark space opera set on a derelict space station, in which some rather creepy things have started happening. There are a couple of other projects on the go which I hope can be announced sometime – including a collaboration with a certain Chuck Wendig that we’re both super-excited about. I’ve got two novelettes being published by Tor.com – the first is COLD WAR, a tie-in to THE BURNING DARK. That’s out on February 25th. The other will appear mid-year and is still under wraps for now!

I’m currently working on book 2 of the Spider Wars series – THE JOVIAN CONSPIRACY – which will be out next year. Once that is done, I’ve got three other novels to write this year, as well as a TV script, not to mention the project with Chuck that will hopefully take off soon.

2014 is certainly my busiest year yet, but that’s what it’s all about, after all!

1.) You MUST fill out the form below (if you’ve signed into Rafflecopter before, it will remember you!)
2.) Giveaway is for 1 copy of HANG WIRE by Adam Christopher to 1 winner
3.) Giveaway is open internationally
4.) You must enter on or before 2/4/14
5.) Giveaway book courtesy of Angry Robot
6.) Please see my Giveaway Policy.

About HANG WIRE:
Ted Hall is worried. He’s been sleepwalking, and his somnambulant travels appear to coincide with murders by the notorious Hang Wire Killer.

Meanwhile, the circus has come to town, but the Celtic dancers are taking their pagan act a little too seriously, the manager of the Olde Worlde Funfair has started talking to his vintage machines, and the new acrobat’s frequent absences are causing tension among the performers.

Out in the city there are other new arrivals – immortals searching for an ancient power – a primal evil which, if unopposed, could destroy the world!