Today Elizabeth Heiter stopped by to talk about her debut novel, HUNTED! Please welcome her to the blog! 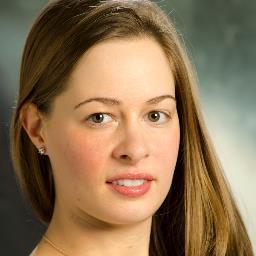 Your debut novel, HUNTED, is out at the end of the year! Have you always wanted to be a writer? Will you tell us a little about yourself and your background?
I have wanted to write novels for as long as I can remember. Back in high school, I co-wrote my first manuscript (a young adult action-adventure novel), and I haven’t stopped since! My background, as you might expect, is in writing – I have a degree in English Literature and I’ve worked as a Communications Director and an e-Learning editor. But novels – and suspense novels in particular – have always been my first love.

Will you tell us more about HUNTED?
HUNTED is about an FBI profiler who discovers just how deadly it can be to get inside the head of a killer.
My heroine, FBI profiler Evelyn Baine, gets assigned to profile the “Bakersville Burier,” a killer who abducts and murders young women, leaving them buried up to their heads deep in the woods. He’s savvy, and Evelyn knows he’s killed before. She also knows that unless she can help the police find him, he’ll strike again. But as she digs deeper into the case, the Bakersville Burier begins to track her too. Suddenly, she’s the one being hunted!

Will you tell us more about your heroine, Evelyn Baine, and why you think readers will connect with her?
Evelyn works for the FBI’s Behavioral Analysis Unit as a criminal investigative analyst (commonly known as a profiler). It’s a job she picked when she was twelve years old and her best friend disappeared and was never found. Evelyn is driven, and she’s passionate about giving others the closure she never had. But she’s also quiet, in some ways as personally insecure as she is professionally confident. I hope readers will like her both for how she’s trying to move beyond her own tragic past to help others and for how she refuses to give up, even when the circumstances – and her boss! – suggest she should. 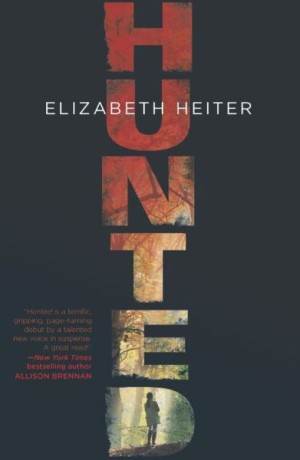 What kind of research did you do for the book?
I love research and I did a ton of it to write Hunted. It was important to me to create characters who were realistic, both the villains and the heroes. In order to get the FBI details right, I interviewed current and former Special Agents, visited Quantico and shot on their firing range, and studied the profiling process extensively. To create my serial killer, I researched personality disorders, did case studies of real serial killers, and actually wrote my own profiles to compare them to what the professionals profiled.

What is your writing process like? Are you a plotter or a pantser?
I’m definitely a plotter. Especially to get the psychological elements right, I did a lot of work on the character development for my villain to match it up to the crimes he commits. Before I sat down to write the first page, I knew how the story would play out, and even how I wanted to tie it in to the second book in the series (Vanished, which comes out in Jan. 2015).

What are some of your favorite books or authors?
There are so many, it’s hard to pick! But when Hunted was finished and I was thinking about who to ask to read it in the hope of an endorsement, I aimed high and approached some of my very favorite authors. So, I have to say Allison Brennan, Suzanne Brockmann, Laura Griffin, Hank Phillippi Ryan, and Zoe Sharp are definitely at the top of my list!

What are you reading now?
At the moment, I’m actually reading a couple of research books! Currently, I’m writing the final book in my Harlequin Intrigue trilogy, which features two FBI SWAT agents, so I’m brushing up on my SWAT knowledge. Also featured in that book is a villain who’s managed to evade capture for closing in on a decade, so I’m doing case studies on real life criminals who did the same.

I have to ask…how did you celebrate when you found out HUNTED would be published?
I celebrated repeatedly! When my agent called me to tell me that Hunted (and the sequel) had sold, I called all the family and friends who had supported me over the past decade as I strove for publication to share the news. My family took me out to celebrate (and fed my writing habits by getting me giftcards for coffee shops – where I like to write!). My longtime critique partner, with whom I wrote that first manuscript, back in high school, also took me out to toast the sale (and, as a fellow writer, she did some jumping up and down with me, too!).

What piece of advice would you give to an aspiring writer and what’s something that you’ve learned on the way to getting published?
The advice I’d give is actually the one piece of advice that was given to me long ago and that has really stuck with me the most over the years: persevere. It’s a hard business, and (for most authors), it comes with a lot of rejection before you make that first sale. But you should never give up on something you love! Just keep pushing forward!

One thing I learned on the way to getting published is the importance of knowing when to be flexible and when to stick to your guns. I had interest from other publishers, on other books, before Hunted, but I really held out for the offer that felt right to me. At the same time, I trust my editor and agent immensely and I believe that every book has the possibility to be even better, so I put as much focus into the editing and revision process as I do in writing the book in the first place.

When you’re not working on your next project, how do you like to spend your free time?
Like most writers, I also love to read! Spending time with family and friends also tops that list.

A few years ago, I bought a new house, and decided to do most of the projects (like re-flooring most of the house, refinishing the deck, etc.) myself. Now that most of those big projects are finished, I’m looking forward to getting back into some of my old hobbies this coming year. First on that list: downhill skiing!

What’s next for you?
In January 2015, Evelyn will be back in the next book in The Profiler series, Vanished. In the sequel to Hunted, Evelyn gets the phone call she’s hoped for – and dreaded – most of her life. There’s news about her best friend, who disappeared when Evelyn was twelve, and Evelyn may finally have the chance to discover what really happened to her.

A little bit later in 2015, I’ll also have a romantic suspense trilogy out with Harlequin Intrigue. The Lawmen trilogy is about three friends who made a pact to join the FBI ten years ago when violence ripped apart their lives. And now, the case that brought them there is back.

FBI rising star, criminal profiler Evelyn Baine, knows how to think like a serial killer. But she’s never chased anyone like the Bakersville Burier, who hunts young women and displays them, half-buried, deep in the woods. As the body count climbs, Evelyn’s relentless pursuit of the killer puts her career—and her life—at risk. And the evil lurking in the Burier’s mind may be more than even she can unravel.

Terror is closer than she thinks…

The Bakersville Burier knows he’s got an FBI profiler on his trail. He knows who she is and where to find her. And he’s biding his time, because he’s planned a special punishment for Evelyn. She may have tracked other killers, but he vows to make this her last chase. This time it’s her turn to be hunted!