Please welcome Frey Robertson to the blog! Her debut novel, HEARTWOOD, just dropped from Angry Robot Books and she was kind enough to answer a few of my questions! 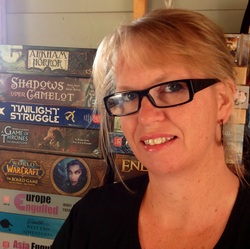 Your debut, HEARTWOOD, just came out!! Will you tell us a little about it and what inspired you to write it?
Hi! Of course, and thanks for asking 🙂 Heartwood is in many ways a traditional epic fantasy, but it has a couple of modern twists – no elves, dwarves or orcs for example, with the conflict being between creatures formed from the elements (in this case the Darkwater Lords which are from the element of water), and more of a gender balance than is usual for the medieval period and some older epic fantasies. If you love knights and castles, weapons and armour, battles and skirmishes, religion and monasteries, romance and adventure, then hopefully you’ll like the book!

I have to ask…how did you celebrate when you found out Heartwood would be published?
I read the email at 6am on my iPad lying in bed. I just passed it to hubby and we both went, “Huh.” I don’t think we could believe it! It gradually sank in over the course of the day. A good friend announced it at staff briefing at the school where I work, and lots of teachers came in all day to congratulate me. That evening we were having a get together anyway with family, and we were able to have an additional toast to the book! It was a good day.

You have degrees in history and archeology, but have you always wanted to be a writer?
Since I was fifteen. I took the degree saying I wanted to become a teacher, and indeed I did teach archaeology to adults for a while, but deep down I wanted the historical background and understanding of the subject to help me with research for my novels. It’s definitely helped. 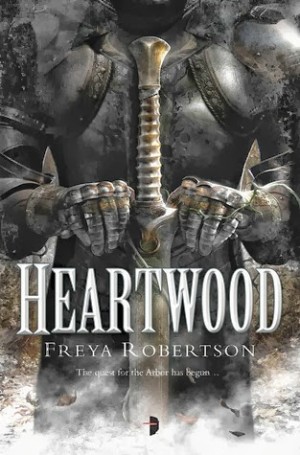 What did you enjoy most about writing Heartwood?
The whole thing was a huge adventure, literally and metaphorically. It took me a while to write, maybe about a year including planning, and sometimes it was hard but it was always fun. I enjoyed designing the map, and I was thrilled when a real cartographer, Steve Luxton, was brought in to design it properly for the book (although a little embarrassed to give him my rough scribble to go on!)

What is your writing process like? Are you a plotter or a pantser?
I’m a plotter, but I’m also a believer in writing without stopping to read back every five minutes. I have to know where I’m going and that I have enough to fill my x amount of chapters or I flounder. But equally it’s nice when it’s going well and you can just go with the flow.

You’ve listed tons of your favorite books on your website, but what is one title that you’d like to experience again for the very first time?
Ooh, good question. One of my favourite books of all time is Magic Kingdom for Sale by Terry Brooks. This book introduced me to the fantasy genre in my teens, and I remember walking into the bookshop, picking it up and thinking “Ooh, fairy stories for grown-ups!” If you haven’t read it, I envy you that wondrous discovery – go and buy it now!

What are you reading now?
A book called Longbourn by Jo Baker. It’s “Downton Abbey meets Price and Prejudice,” told from the servants’ point of view. I like to read outside my own genre, and this is a delightful read.

You live in beautiful New Zealand. If someone were to visit you there for the first time, where would you take them?
I live in the sub-tropical Northland, which is arguably the best bit 🙂 Think lush palm trees, mandarins and kiwi fruit, fishing, sun, sea and surf. I would recommend the beautiful Bay of Islands, which is the closest to paradise I think you’ll ever get.

What’s next for you, this year and beyond?
I’ve written and submitted the second in the series, Sunstone. For NaNo I’m writing a romance (I’ve also written 23 romance novels) just because it’s light and easy and a lot of fun after a 160,000 epic fantasy! After that… I have lots of ideas. I just have to pick one! 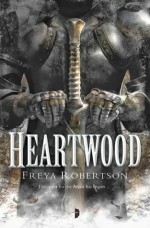 About HEARTWOOD:
A dying tree, a desperate quest, a love story, a last stand.

Chonrad, Lord of Barle, comes to the fortified temple of Heartwood for the Congressus peace talks, which Heartwood’s holy knights have called in an attempt to stave off war in Anguis. But the Arbor, Heartwood’s holy tree, is failing, and because the land and its people are one, it is imperative the nations try to make peace.

After the Veriditas, or annual Greening Ceremony, the Congressus takes place. The talks do not go well and tempers are rising when an army of warriors emerges from the river. After a fierce battle, the Heartwood knights discover that the water warriors have stolen the Arbor’s heart. For the first time in history, its leaves begin to fall…

The knights divide into seven groups and begin an epic quest to retrieve the Arbor, and save the land.