Here are  the  books that I’m especially looking forward to in SFF for November! (click on the covers to pre-order)! These are in no particular order. 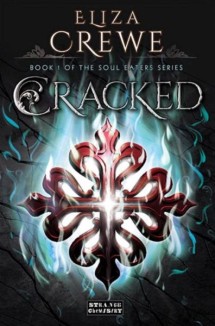 Well, technically, she eats their soul. But she totally promises to only go for people who deserve it. She’s special. It’s not her fault she enjoys it. She can’t help being a bad guy. Besides, what else can she do? Her mother was killed and it’s not like there are any other “soul-eaters” around to show her how to be different. That is, until the three men in suits show up.

They can do what she can do. They’re like her. Meda might finally have a chance to figure out what she is. The problem? They kind of want to kill her. Before they get the chance Meda is rescued by crusaders, members of an elite group dedicated to wiping out Meda’s kind. This is her chance! Play along with the “good guys” and she’ll finally figure out what, exactly, her ‘kind’ is.

Be careful what you wish for. Playing capture the flag with her mortal enemies, babysitting a teenage boy with a hero complex, and trying to keep one step ahead of a too-clever girl are bad enough. But the Hunger is gaining on her.

The more she learns, the worse it gets. And when Meda uncovers a shocking secret about her mother, her past, and her destiny… she may finally give into it. 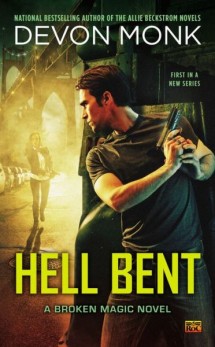 Hell Bent by Devon Monk (Roc-Nov. 5th)
Synopsis-Instead of the deadly force it once was, magic is now a useless novelty. But not for Shame Flynn and Terric Conley, “breakers” who have the gift for reverting magic back to its full-throttle power. In the magic-dense city of Portland, Oregon, keeping a low profile means keeping their gifts quiet. After three years of dealing with disgruntled magic users, Shame and Terric have had enough of politics, petty magic, and, frankly, each other. It’s time to call it quits.

When the government discovers the breakers’ secret—and its potential as a weapon—Shame and Terric suddenly become wanted men, the only ones who can stop the deadly gift from landing in the wrong hands. If only a pair of those wrong hands didn’t belong to a drop-dead-gorgeous assassin Shame is falling for as if it were the end of the world. And if he gets too close to her, it very well could be…. 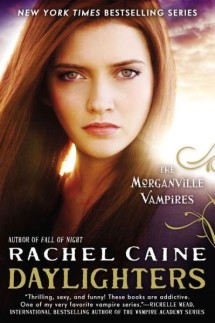 Daylighters (Morganville Vampires) by Rachel Caine (Penguin-Nov. 5th)
Synopsis-While Morganville, Texas, is often a troubled town, Claire Danvers and her friends are looking forward to coming home. But the Morganville they return to isn’t the one they know; it’s become a different place—a deadly one

Something drastic has happened in Morganville while Claire and her friends were away. The town looks cleaner and happier than they’ve ever seen it before, but when their incoming group is arrested and separated—vampires from humans—they realize that the changes definitely aren’t for the better.

It seems that an organization called the Daylight Foundation has offered the population of Morganville something they’ve never had: hope of a vampire-free future. And while it sounds like salvation—even for the vampires themselves—the truth is far more sinister and deadly.

Now, Claire, Shane and Eve need to find a way to break their friends out of Daylighter custody, before the vampires of Morganville meet their untimely end. 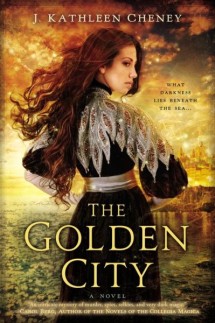 The Golden City by J. Kathleen Cheney (Roc-Nov. 5th)
Synopsis-For two years, Oriana Paredes has been a spy among the social elite of the Golden City, reporting back to her people, the sereia, sea folk banned from the city’s shores….

When her employer and only confidante decides to elope, Oriana agrees to accompany her to Paris. But before they can depart, the two women are abducted and left to drown. Trapped beneath the waves, Oriana’s heritage allows her to survive while she is forced to watch her only friend die.

Vowing vengeance, Oriana crosses paths with Duilio Ferreira—a police consultant who has been investigating the disappearance of a string of servants from the city’s wealthiest homes. Duilio also has a secret: He is a seer and his gifts have led him to Oriana.

Bound by their secrets, not trusting each other completely yet having no choice but to work together, Oriana and Duilio must expose a twisted plot of magic so dark that it could cause the very fabric of history to come undone…. 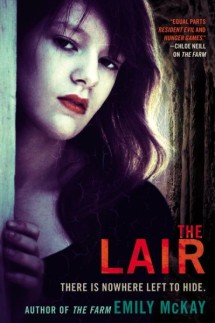 The Lair by Emily McKay (Penguin-Nov. 5th)
Synopsis-In the battle against the vampiric Ticks, humanity was slowly but certainly headed for extinction. For months, twin sisters Lily and Mel had been “quarantined” with thousands of other young people being harvested for their blood—food for the Ticks. Finally escaping with a few friends, the twins are separated—and must continue the fight on their own . . .

After making it to a resistance base camp in Utah, Lily learned to survive at all costs. But when a Tick attack decimates the fighters, Lily and her pregnant friend, McKenna, decide to make the hard trek north to Canada—and safety.

Meanwhile, Mel is being taught how to survive by the very vampire that turned her. Living without her sister is hard, but dealing with the fact that her autism was cured by the vampire bite is an even bigger challenge.

But when a monstrous betrayal places Lily in mortal danger, Mel must set out to find her, save her, and begin to unravel the empire of destruction that the Ticks have built. 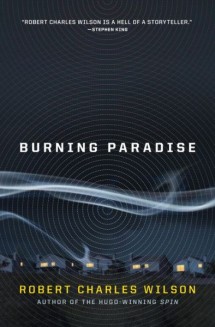 Cassie’s world has been at peace since the Great Armistice of 1918. There was no World War II, no Great Depression. Poverty is declining, prosperity is increasing everywhere; social instability is rare. But Cassie knows the world isn’t what it seems. Her parents were part of a group who gradually discovered the awful truth: that for decades—back to the dawn of radio communications—human progress has been interfered with, made more peaceful and benign, by an extraterrestrial entity. That by interfering with our communications, this entity has tweaked history in massive and subtle ways. That humanity is, for purposes unknown, being farmed.

Cassie’s parents were killed for this knowledge, along with most of the other members of their group. Since then, the survivors have scattered and gone into hiding. Cassie and her younger brother Thomas now live with her aunt Nerissa, who shares these dangerous secrets. Others live nearby. For eight years they have attempted to lead unexceptional lives in order to escape detection. The tactic has worked.

Until now. Because the killers are back. And they’re not human. 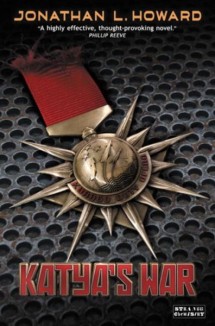 Katya’s War by Jonathan L. Howard (Strange Chemistry-Nov. 5th)
Synopsis-The battle lines have been drawn. The people of Russalka turn upon one another in a ruthless and unwavering civil war even while their world sickens and the deep black ocean is stained red with their blood. As the young civilisation weakens, its vitality fuelling the opposing militaries at the cost of all else, the war drums beat louder and louder.

Katya Kuriakova knows it cannot last. Both sides are exhausted – it can only be a matter of days or weeks before they finally call a truce and negotiate. But the days and weeks pass, the death toll mounts, and still the enemy will not talk.

Then a figure from the tainted past returns to make her an offer she cannot lightly refuse – a plan to stop the war. But to do it she will have to turn her back on everything she has believed in, everything she has ever fought for, to make sacrifices greater even than laying down her own life. To save Russalka, she must become its greatest enemy. 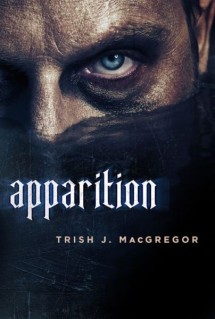 Apparition by Trish J. MacGregor (Nov. 12th-Tor)
Synopsis-Tess and Ian have been living in the high city of Esperanza for years, along with Tess’s niece, Maddie, and her partner, Nick Sanchez. They thought they could rest, that they had defeated the brujo threat to our plane of existence. But they were wrong.

A new and greater threat has formed, a new tribe of the hungry dead, seeking to possess the bodies of the living in order to experience the passions of physical life. This new tribe has found the door to the physical plane that is Esperanza, and they threaten all human life. Only the outnumbered Light Chasers and their human allies can stand against the evil brujos. 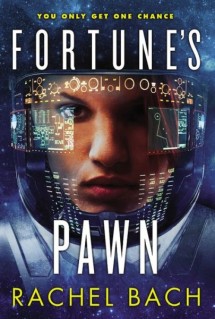 Fortune’s Pawn by Rachel Bach (Orbit-Nov. 5th)
Synopsis-Devi Morris isn’t your average mercenary. She has plans. Big ones. And a ton of ambition. It’s a combination that’s going to get her killed one day – but not just yet.

That is, until she just gets a job on a tiny trade ship with a nasty reputation for surprises. The Glorious Fool isn’t misnamed: it likes to get into trouble, so much so that one year of security work under its captain is equal to five years everywhere else. With odds like that, Devi knows she’s found the perfect way to get the jump on the next part of her Plan. But the Fool doesn’t give up its secrets without a fight, and one year on this ship might be more than even Devi can handle. 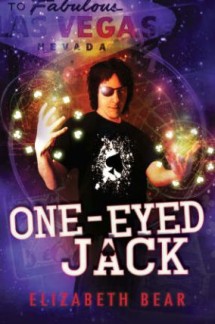 When the Suicide King vanishes – possibly killed – in the middle of a magic-rights turf war started by the avatars of Los Angeles, a notorious fictional assassin, and the mutilated ghost of Benjamin “Bugsy” Siegel – his partner, the One-Eyed Jack, must seek the aid of a bizarre band of legendary and undead allies: the ghosts of Doc Holliday and John Henry the steel-driving man; the echoes of several imaginary super spies, decades displaced in time; and a vampire named Tribute, who bears a striking resemblance to a certain long-lost icon of popular music.