Fantasy Interview: Steve Bein, author of Daughter of the Sword and Year of the Demon

Interview: Steve Bein, author of Daughter of the Sword and Year of the Demon

YEAR OF THE DEMON, the 2nd book in Steve Bein’s Fates Blades series, is out today, and he stopped by to talk about the new book, and more! 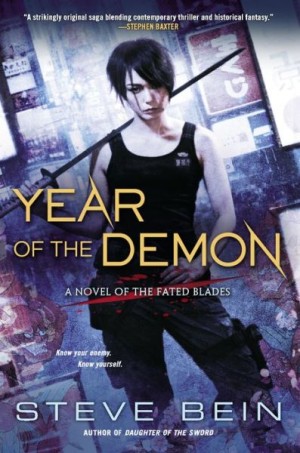 Steve, the 2nd novel in your Fated Blades series (after Daughter of the Sword), Year of the Demon, will soon be out! Will you tell us a bit about it?
Detective Sergeant Mariko Oshiro is the newest recruit on Tokyo’s top Narcotics unit, and she has a price on her head. A brutal yakuza crime lord wants her dead, but he offers to lift the bounty if she retrieves an ancient artifact that was stolen from him: an iron demon mask with a mysterious link to Mariko’s own Inazuma sword.

The mask is a fetish of a murderous cult, and it has a bloody history. We get to see part of that history through Daigoro Okuma, a young samurai lord who also wields the sword that will someday be Mariko’s. The Okuma clan faces dangers unlike any it has seen before, when the demon mask pits Daigoro against the mightiest warlord in the empire.

The third protagonist, Kaida, is a pearl diver from a tiny village that clings like a barnacle to the edge of the empire. Her life is turned upside down when ninja operatives invade, hunting for a treasure deep in the belly of a nearby shipwreck. Kaida’s fate is intertwined with the blade and the mask too, and her actions have ramifications that affect Daigoro and Mariko hundreds of years later.

What do you admire the most about your heroine, Detective Sergeant Mariko Oshiro, and why do you think readers will root for her?
Mariko is tough as hell. The reason I admire that most is because after 20 years in martial arts, I’ve found that’s the hardest thing to train in a fighter. Anyone can learn pain tolerance; you just get hit a lot. But pain tolerance isn’t toughness. Toughness is taking a good, hard shot to the head and not minding much, maybe even enjoying it a bit. It’s not knowing how to quit.

Mariko needs that in spades because I make her life miserable. I think readers root for the underdog, and Mariko is definitely that. Right from the first chapter, she’s the smallest cop in a SWAT/Narcotics raid, and that’s a mission where size and strength mean a lot. And it’s not enough for Mariko to smash down doors and tackle perps as well as everyone else. As a woman in a profession still dominated by men, she’s got to outperform everyone else just to be seen as an equal.

And that’s just chapter one. In Daughter of the Sword her goal was to get assigned to the Narcotics Division. Now she’s done it, so instead of being the all-star who made sergeant in record time, she’s back to being a rookie. She has to prove herself all over again, only this time around she’s got to do it with a bounty on her head. Only someone as tough as Mariko could handle the pressure. I think readers will enjoy watching her go through the hell I put her through. 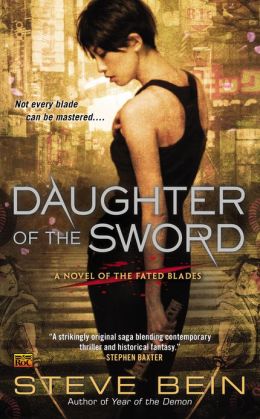 What kind of research did you do for the novels?
Oodles, mostly belonging to two categories: police research and historical research. The police research doesn’t involve all that much reading; it’s a lot of phone calls, texts, emails, one-on-one interviews. Then there’s the really fun stuff, like ride-alongs and shooting courses and things like that. I’m a lefty pacifist vegetarian, and not really a gun guy at all, but I have to admit it was a lot of fun getting out on the firing range and shooting submachine guns. It really brings out that inner ten-year-old that still likes to throw snowballs and play with fire.

The historical research involves a lot of reading and googling. In writing Daigoro’s sections, I can take a break from the reading to go back and watch some of Kurosawa’s samurai films. Kurosawa was obsessed with getting the historical details right, so you can see things there that you can’t find easily in books, such as where these people carried all their stuff in clothes without pockets. In Kaida’s case I got extremely lucky: right after World War II, the Office of Naval Research was interested in training special operatives—we now call them Navy SEALs—in deep water free diving. They studied the ama, traditional Japanese pearl divers, and published a great big volume on ama diving techniques. That was a treasure trove for me.

What have been some of your biggest literary influences?
It’s hard to say who my influences are generally, because I don’t think influences have generalized effects. Specific projects have specific influences. For these books, certainly James Clavell, and also people like William Gibson and Neal Stephenson for their attention to some of the cool idiosyncrasies of Japanese culture. Frank Herbert and J.R.R. Tolkien too, for the sheer scale of world-building—not that Japan is anything like Arrakis or Middle Earth, but it is another world for most of my readers, and it has to feel grounded in thousands of years of history. I’ve been reading a lot more women lately too, the better to get into Mariko’s and Kaida’s heads—so I just got off a giant Octavia Butler binge. Before her it was Helen DeWitt, and before her it was Elizabeth McCracken and Ursula K. LeGuin.

What are you reading now?
You mean apart from my students’ papers? My work life as a professor has me reading academic stuff most of the time—a lot of Japanese philosophy these days. But I do make it a point to read fiction every day. A few days ago a friend started reading Year of the Demon and insisted I try out Diana Gabaldon’s Outsider books. I just picked up the first of that series. 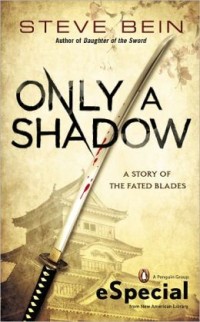 What, for you, has been one the most interesting things about being a published writer?
It’s very strange to have fans. I have a Facebook page, and people actually post stuff there, and they’re actually interested in my responses. I’m not fond of talking about my work in public, and in many respects I’m a Luddite and a technophobe, so it’s weird for me just to have a Facebook page at all. I thought I’d hate it, but now I check it every day and I find myself enjoying it. Anyone who knows me well can tell you that’s a very, very strange thing.

What’s one piece of advice that you would give to aspiring writers?
Pessimism is the new optimism. If you send out a story and you assume it’s going to sell, you’re going to be disappointed most of the time. If you assume you’ll never sell anything again, and you write just for the love of it, then go ahead and send your stories out as an afterthought. Suspend all expectations of excess. Every time you get a rejection, it’ll be business as usual, and every time you get an acceptance you’ll be tickled pink.

When you’re not busy on your next project, what’s one of your favorite ways to spend your free time?
Playing with my dogs and practicing jiujitsu.

What’s next, this year and beyond?
This December my first reprint comes out: a short story called “The Most Important Thing in the World,” in an anthology from Anne and Jeff VanderMeer called The Time Traveler’s Almanac. Next fall we’ll see book three of the Fated Blades. After that, I hesitate to speculate, except to say that I have no plans to stop writing any time soon.

About DAUGHTER OF THE SWORD:
As the only female detective in Tokyo’s most elite police unit, Mariko Oshiro has to fight for every ounce of respect, especially from her new boss. But when he gives her the least promising case possible—the attempted theft of an old samurai sword—it proves more dangerous than anyone on the force could have imagined.

The owner of the sword, Professor Yasuo Yamada, says it was crafted by the legendary Master Inazuma, a sword smith whose blades are rumored to have magical qualities. The man trying to steal it already owns another Inazuma—one whose deadly power eventually comes to control all who wield it.

Mariko’s investigation has put her on a collision course with a curse centuries old and as bloodthirsty as ever. She is only the latest in a long line of warriors and soldiers to confront this power, and even the sword she learns to wield could turn against her.

About YEAR OF THE DEMON:
Detective Sergeant Mariko Oshiro has been promoted to Japan’s elite Narcotics unit—and with this promotion comes a new partner, a new case, and new danger. The underboss of a powerful yakuza crime syndicate has put a price on her head, and he’ll lift the bounty only if she retrieves an ancient iron demon mask that was stolen from him in a daring raid. However, Mariko has no idea of the tumultuous past carried within the mask—or of its deadly link with the famed Inazuma blade she wields.

The secret of this mask originated hundreds of years before Mariko was born, and over time the mask’s power has evolved to bend its owner toward destruction, stopping at nothing to obtain Inazuma steel. Mariko’s fallen sensei knew much of the mask’s hypnotic power and of its mysterious link to a murderous cult. Now Mariko must use his notes to find the mask before the cult can bring Tokyo to its knees—and before the underboss decides her time is up…