Interviews Interview: Nicholas Kaufmann, author of Dying Is My Business

Interview: Nicholas Kaufmann, author of Dying Is My Business

Please welcome Nicholas Kaufmann to the blog! His new novel, DYING IS MY BUSINESS, just came out last week and he was kind enough to answer a few of my questions about the new book, and more! 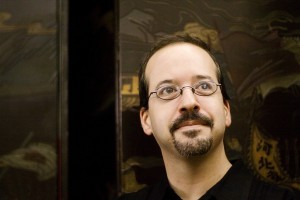 Will you tell us a bit about your new book, DYING IS MY BUSINESS?
DYING IS MY BUSINESS is a hardboiled urban fantasy-noir about Trent, a thief for a Brooklyn crime syndicate who can’t stay dead. Whenever he’s killed, he wakes up again a few minutes later, completely healed. Unfortunately, whenever he cheats death, someone else has to die in his place. There’s also magic, monsters, thrills, and some snarky humor. Audiences are saying it’s better than CATS, better than E.T….

Why do you think readers will root for your hero, Trent? What did you enjoy most about writing the novel, and his character?
I think they’ll root for him because he’s not heartless. He does some bad things, mostly because he thinks he’s out of options, but he’s got a conscience, yearns to become better person, and has a sharp, sarcastic tongue. I think a lot of readers will also empathize with Trent’s desire to belong. He doesn’t know who he is or where he came from. He certainly doesn’t know why he can’t stay dead. So he feels like a freak, and outsider. His compatriots in the crime syndicate don’t exactly make him feel at home. So when he meets a ragtag group of magical misfits who are trying to do go, he finds a place where he feels like he finally belongs. Unfortunately, it turns out not to be that easy. But then, nothing ever is.

What I enjoyed writing most about the novel, and Trent’s character in particular, is the way he reacts to the secret world of magic that opens up to him in the course of the novel. I think Trent brings a sense of wonder that has kind of gone missing from many urban fantasies. Magic and the supernatural have become commonplace, even institutionalized in the genre. Characters work for special government agencies that handle the supernatural, or are P.I.s that specialize in supernatural cases. I didn’t want to do that. I wanted a world where the supernatural is hidden from the public. And that includes Trent. So every time he discovers something new, it fills him with wonder or dread or terror. That sense of awe follows him throughout the book. I was careful to remember that as the protagonist he’s a stand-in for the audience, and I want the audience to feel that same awe and wonder and terror. If Trent is jaded or bored by the world he lives in, the readers will be, too, and that’s death for a book. 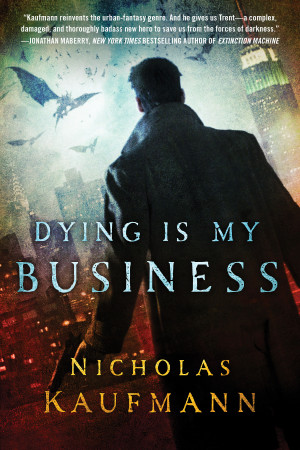 You have a background in publishing and PR, but have you always hoped to be a published writer?
Absolutely. I’ve been writing stories since the fourth grade. I remember getting caught in the classroom writing stories instead of doing my school work. One teacher even took a story from me and read it in front of the whole class. I don’t know if she was trying to embarrass me or praise me by doing that. At that age, I felt more embarrassed than praised.. But I remember the rest of the class was transfixed by the story, and they all clapped when it was over. I think that was probably a turning point in my life. After that, I was never not writing. I had a kind of emotionally distant father, and so I wrote this science fiction story about a boy and father who get teleported to another planet, where they’re forced to spend time together fighting monsters (paging Dr. Freud!). I drew comic books about a superhero I made up named Orgo, who got zapped by radiation and so could pretty much perform whatever superpower the plot required of him, like flying or zapping people or breathing underwater. Radiation, the wonder drug! I loved scary stories, too, so I drew a “horror anthology” comic with my best friend Andy called CHAMBER OF HORRORS, which was filled with really awful, juvenile sting-in-the-tail stories. As I grew older, I began to take writing more seriously as a career option. Once I made the commitment to writing, I started selling stories. I got my start in the horror genre, but I’ve always loved urban fantasy, even before it was called urban fantasy. BIG TROUBLE IN LITTLE CHINA, THE GOLDEN CHILD, which is a terrible movie but I kind of loved when I was 17…I loved all that stuff that mixed magic and mystery with a real world setting, so it’s no wonder that’s what I felt compelled to write, too.

What is your writing process like? Are you a plotter or a pantser?
I have probably the least efficient writing process ever. But it’s my process and I seem to be stuck with it. I start with an outline. At least, for longer works, I outline. For short stories I don’t bother, though I’ll usually make notes about where I want things to go. My novel outlines usually fluctuates between the cursory and the ridiculously detailed. I’ll throw in dialogue sometimes, or descriptions, but then when I actually get around to writing that scene I’m just as likely not to use it. Sometimes characters I thought would be there for the scene are actually somewhere else entirely, or the dialogue is no longer relevant. So while I rely on an outline so that I’m never stuck staring at a blank page and wondering, “Now what?”, it is certainly not set in stone. I leave myself room for spontaneity, because I find that the scenes I didn’t plan are the ones where the book really comes alive.

Once I’m happy with the outline, I work my way through the rough draft, often with the help of the crit group I’ve been a part of for a decade now. Time and again, their input has proven invaluable. But it’s a slow process because I’m a slow writer. Just completing the rough draft can take me nearly a year! When I finally reach the end, I feel like collapsing into an exhausted heap, but instead I begin the editing/revising process. I hate rough drafting, it feels like a chore, but I really enjoy editing and revising once the rough draft is done. That’s where I think the magic happens and the book has a chance to become something special. Once I have the manuscript in shape structurally, I print it out and attack it with my trusty red pen, polishing up the prose, filling in the logic holes I didn’t see before, correcting typos, etc. I’ll do this at least twice, or until the prose is polished enough for me to read it without cringing. Only then do I feel like the book is ready to go. This whole process takes a really long time. I have friends who can crank out a novel in three months–a good novel, no less!–and I’m very jealous of them. But that’s not my process. Everyone’s process is different. 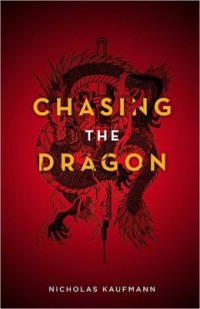 You’ve been nominated for numerous awards, including the Bram Stoker Award, so obviously you’re no stranger to writing about the scaries, but what is something that you find particularly terrifying?
You mean aside from spiders and gross bugs? I think what scares me the most is losing control of my own will, my own body. It’s a theme that appears in a lot of my work. In DYING IS MY BUSINESS, the main villain, Reve Azrael, is a necromancer who can take over and control dead bodies as her minions, called revenants. I played with this idea in CHASING THE DRAGON, too, where the Dragon is able to control the corpses of her victims. In my short story “Under the Skin” (which can be found in my e-collection STILL LIFE: NINE STORIES — plug!), the protagonist bleeds eels that burrow into other people and allow her to control them. It’s something that shows up enough in my work that I figure it can’t be a coincidence. It wigs me out.

What, or who, have been some of the biggest influences on your writing?
That’s a tough one. Because I know which writers I enjoy and admire, but I don’t know if they’re big influences on my work. For example, I adore Clive Barker and Peter Straub, but I don’t think I write like them, as much as I’d love to. I’ve learned certain things from them, though, about structure and transcending genre. From Sarah Langan and Laird Barron I learned about atmosphere and character. From the James Bond movies and Indiana Jones movies I learned about pacing and writing compelling action scenes. Does that make them my influences? I’ll leave that for you to decide!

What are you reading now?
I’m currently reading Ian Rogers’s horror story collection, EVERY HOUSE IS HAUNTED. I’m enjoying it a lot. Ian’s a good writer, and the stories are a lot of fun.

When you’re not working on your next project, how do you like to spend your free time?
What is this free time you speak of? Well, I enjoy spending time with my wife, going for walks, socializing, watching TV. Normal stuff, I guess. Writing is a very lonely endeavor. We’re pretty much stuck in a room by ourselves all day. So when I’m not writing I suppose what I like best is being around other people.

What’s next for you?
The sequel to DYING IS MY BUSINESS, currently titled DIE AND STAY DEAD, is set to come out from St. Martin’s in the fall of 2014. I also have a story coming out later this month in PS Publishing’s new anthology, DARK FUSIONS, which is edited by New York Times bestselling author Lois Gresh. In the near future, I plan to start work on the third book of the series, tentatively titled ONLY THE DEAD SLEEP, as well as another urban fantasy that’s completely unrelated but has been poking at my brain for a while now, demanding my attention.

About DYING IS MY BUSINESS:
Given his line of work in the employ of a psychotic Brooklyn crime boss, Trent finds himself on the wrong end of too many bullets. Yet each time he’s killed, he wakes a few minutes later completely healed of his wounds but with no memory of his past identity. What’s worse, each time he cheats death someone else dies in his place.

Sent to steal an antique box from some squatters in an abandoned warehouse near the West Side Highway, Trent soon finds himself stumbling into an age-old struggle between the forces of good and evil, revealing a secret world where dangerous magic turns people into inhuman monstrosities, where impossible creatures hide in plain sight, and where the line between the living and the dead is never quite clear. And when the mysterious box is opened, he discovers he has only twenty-four hours to save New York City from certain destruction, in Dying Is My Business by Nicholas Kaufmann.