David Barnett’s new novel, GIDEON SMITH AND THE MECHANICAL GIRL, will be out on the 10th, and today, he’s stopped by to chat about the new book, and more! 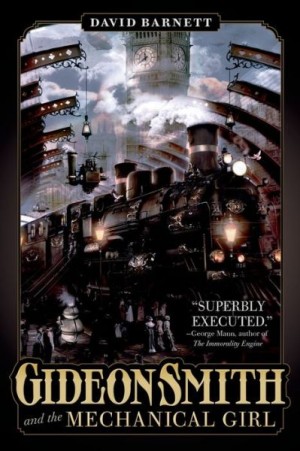 Gideon Smith and the Mechanical Girl is a bit of a departure from your previous novels! Will you tell us a bit about it and what inspired you to write it?
My previous novels were all published by the small presses – Hinterland and Angelglass by Immanion Press and popCULT! by Pendragon Press. They were all different to each other, so I suppose Gideon Smith continues the exploration of different sub-genres, in a way. But those first three novels were very much part of a steep learning curve on how to write and structure novels, not always successfully. Hopefully Gideon Smith is a much more rounded novel – it’s certainly the first to be picked up by a major publisher (Tor in the US, Snowbooks in the UK). It’s also the first time I’ve written a series, which is a new discipline for me. And, of course, the subject matter – steampunk, or alternate history, or adventure, whatever you want to call it.

Gideon Smith and the Mechanical Girl is set in an alternate 1890, when the British Empire is even more far-reaching than it was in real life. America is a divided continent, with Britain controlling the east coast, a breakaway Japanese faction on the west coast, and Spain still running what we know as Mexico. In the middle bits are a load of lawless territories, especially in Texas. That is explored more fully in book two. In book one we meet Gideon, a young, rather naïve fisherman who longs for adventure, and worships at the altar of the penny dreadfuls, particularly World Marvels & Wonders which features the exploits of his hero, Captain Lucian Trigger. When his village is threatened by mysterious happenings, Gideon goes off to find Captain Trigger and in the process has to become a hero himself.

It was inspired, really, by a love of old-fashioned adventure, both the Victorian type and the pulp-ish Indiana Jones-style escapades. I wanted to write something like that but with modern sensibilities – explore the nature of heroism. I hope it works!

You have a journalism background, but had you always seen yourself eventually writing novels?
When I was younger it never occurred to me that I could write novels, that I’d be allowed to write novels. That sort of thing seemed to be for other people. Then when I did realize pretty much anyone could write a novel if they wanted, it didn’t occur to me that I wouldn’t get published. I signed up with John Jarrold’s literary agency in 2005, and seven novels later I got the Gideon Smith deal with Tor. So I suppose that throughout my working life I envisaged writing novels, but I never really saw it as a replacement for journalism… though different writing disciplines, they are both about writing.

Why Steampunk? What did you enjoy most about writing Gideon Smith and the Mechanical Girl?
I didn’t specifically set out to write a steampunk novel, though I did want to write something in the Victorian era with a generous helping of alternative technology and the supernatural. So, yeah, it’s a steampunk novel! I just thought I was writing a book, until someone else told me what it was to be shelved under. It’s all cool by me; whatever shorthand or signposting helps people get to Gideon is great. I hope steampunk fans like it; equally, I hope those who don’t necessarily count themselves as steampunk readers might get a lot out of it, too. I enjoy the act of writing generally, but I think the best thing about this novel was the way the plot kept just opening up new lines and avenues all the time, and the characters just kept clamouring for more time and space. Thankfully, the deal with Tor is for three Gideon Smith books…

Did you do any specific research for the book?
Yeah, loads of research. Most of which I threw out of the window. No reader wants to be battered over the head with how clever the author is and how much knowledge he or she has about the internal workings of the steam engine. I like to have an understanding of what I can and can’t do, and then generally just do it anyway.

Why should we root for Gideon? What, in your opinion, makes him an appealing hero?
To be honest, Gideon’s a bit of an idiot at the beginning of the novel. Well, not so much an idiot, but he’s certainly naïve and a dreamer. I hope he has a decent journey through the book that teaches him a lot of things – primarily, what being a hero is all about and not everything is about waving flags and doing your duty without thinking about it a bit. He’s always learning, even through books two and three, but I hope he becomes a bit more likeable and appealing as the story progresses. Unexpectedly for me as a writer, it was the supporting characters who are a little more appealing, and they have a positive influence on Gideon.

What, or who, have been some of the biggest influences on your writing?
My editor at Tor, Claire Eddy. My agent John Jarrold. They tell me what does and doesn’t work and make great suggestions. As to other authors – I love the work and attitude of Neil Gaiman, I deeply respect Jon Courtenay Grimwood. And overall, my wife Claire, who encourages me in no uncertain terms to “just get on with it” if there’s any danger of me taking myself too seriously. 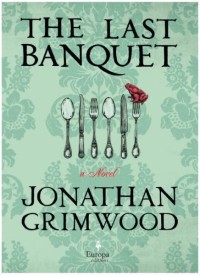 Without thinking about it too much, what book would you recommend without reservation if asked?
One book? Impossible! I will always love On The Road by Jack Kerouac, and following on from the question before, two best books I have read this year and which I try to push on anyone are Gaiman’s The Ocean at the End of the Lane and Grimwood’s The Last Banquet.

When you’re not working on your next project, how do you like to spend your free time?
What is this “free time” of which you speak? Heh. With a full time job and a family, free time is pretty much taken up by the fiction writing. Though I do like rum. Just not planning on making it a lifestyle choice at this stage.

What’s next for you?
Well, I’ve just delivered book three of Gideon Smith to Tor, and waiting for editor’s notes on that. After that it kind of depends on the reaction to Gideon Smith and the Mechanical Girl and its sequels… if it’s good, then hopefully they’ll want more. I also have several other non-Gideon projects in a variety of SF/F sub-genres that I’d love to see the light of day.

About GIDEON SMITH AND THE MECHANICAL GIRL:
Nineteenth century London is the center of a vast British Empire. Airships ply the skies and Queen Victoria presides over three-quarters of the known world—including the East Coast of America, following the failed revolution of 1775.

London might as well be a world away from Sandsend, a tiny village on the Yorkshire coast. Gideon Smith dreams of the adventure promised him by the lurid tales of Captain Lucian Trigger, the Hero of the Empire, told in Gideon’s favorite “penny dreadful.” When Gideon’s father is lost at sea in highly mysterious circumstances Gideon is convinced that supernatural forces are at work. Deciding only Captain Lucian Trigger himself can aid him, Gideon sets off for London. On the way he rescues the mysterious mechanical girl Maria from a tumbledown house of shadows and iniquities. Together they make for London, where Gideon finally meets Captain Trigger.

But Trigger is little more than an aging fraud, providing cover for the covert activities of his lover, Dr. John Reed, a privateer and sometime agent of the British Crown. Looking for heroes but finding only frauds and crooks, it falls to Gideon to step up to the plate and attempt to save the day…but can a humble fisherman really become the true Hero of the Empire?

David Barnett’s Gideon Smith and the Mechanical Girl is a fantastical steampunk fable set against an alternate historical backdrop: the ultimate Victoriana/steampunk mash-up!