Interviews Interview: Carla Norton, author of The Edge of Normal

Interview: Carla Norton, author of The Edge of Normal

THE EDGE OF NORMAL has been on of the best reads this year for me, so I’m thrilled that Carla Norton answered a few of my questions about the book, and more!

Please welcome Carla to the blog! 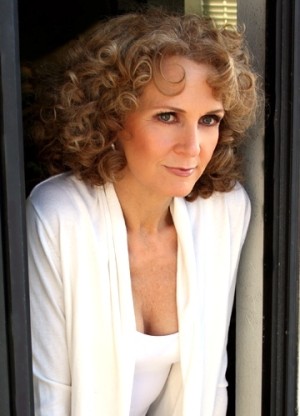 Carla, your first book, PERFECT VICTIM, about the true story of a woman that was held prisoner in a box for years, was put on the reading list for the FBI’s Behavioral Sciences Unit and was also a #1 New York Times Bestseller, but did you ever think you’d dive into the world of writing fiction?
It’s amazing that PERFECT VICTIM has gained such wide appeal, because writing true crime is like walking on eggshells. You have to be very careful about getting the facts straight, and you’re always conscious that people truly suffered. Plus, you have to live with the crime while you’re writing the book, and it gives you nightmares. It affects you. It becomes part of your life experience. So, writing fiction is cathartic in a way. Fiction is a way to transform terrible truths into something personally meaningful.

Your brand new novel, THE EDGE OF NORMAL, had me up late and on the edge of my seat, and explored much of the same territory as PERFECT VICTIM, since it was about a girl that had been held captive for years. Obviously, with the freedom that comes from writing fiction, you were able to take the story any way you wanted. That said, what did you enjoy most about the writing process for THE EDGE OF NORMAL?
First of all, thank you for reading the book, and thanks for your kind words.

The writing process is a mysterious and wonderful thing. It’s like a compulsion. What I enjoy most is when a scene snaps into place and I’m so immersed in the story that the rest of the world disappears. And I love being able to commit mayhem and break the law without suffering the consequences. 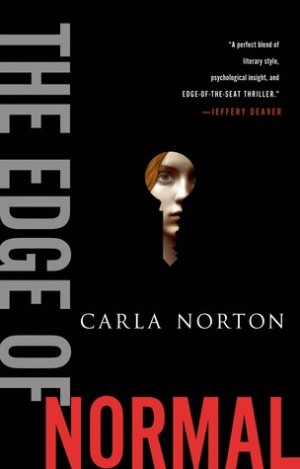 What do you like most about your heroine, Reeve LeClaire, and why do you think your readers will root for her (I certainly know why I did!)
I think most of us root for the underdog. Most of us aren’t martial arts experts who are 250 pounds of muscle. Action heroes are hard to relate to. Instead, my protagonist is small and wiry and driven by inner demons. Reeve is scarred and damaged and has no special skills other than her ethics and her impulses. She’s tenacious as hell, and when called upon, she’s fearless.

Since you’re so well versed in themes of captivity and the psychology of captivity, did you have to do any additional research for the novel?
I’m always doing research. What originally interested me was Stockholm syndrome. I learned a lot about that while researching PERFECT VICTIM, and I’ve kept thick files on that subject, but for this book, I had to research the other side to that equation: the captor. There are many studies and books by FBI profilers, forensic psychiatrists, and I also sought help. But the hardest research had to do with guns. I’m not a weapons expert, so it’s tough writing from the point of view of someone who is.

Obviously, in your writing and research, you must go to some very dark and terrifying places, but what is something that you personally find particularly terrifying?
It’s interesting that you ask about that, because I’ve been thinking lately that most of what frightens me is hardwired into our DNA: fear of falling, of fire, of snakes, sharks and bears. That’s primal. But it’s worse to think about the bloody gamut of what human beings do to each other. Smart, predatory humans are the scariest, most dangerous creatures imaginable.

On a lighter note, what are some of your favorite authors or novels?
This could be a long answer, because I read widely. For style, you can’t beat Kesey’s ONE FLEW OVER THE CUCKOO’S NEST. But let’s stick with thrillers. THE SILENCE OF THE LAMBS is a masterwork. THE GIRL WITH THE DRAGON TATOO series is terrific, as are books by Lee Child, Jeffery Deaver, Robert Crais, Laura Lippman, Gillian Flynn, Chevy Stevens, and Jo Nesbo, to name a few. Also, I think I have to mention the HUNGER GAMES series. Finally, regarding Stockholm syndrome, the top novel was written years before the term was even coined: THE COLLECTOR, by John Fowles.

What are you reading now?
Lee Child’s new thriller, of course! And I just got Louise Penny’s newest one, which I can’t wait to consume.

I loved Reeve, and her transformation during the course of the novel was one of the best parts, making me eager for more of her story. Is there a possibility that we’ll see her in future novels?
Yes, Reeve is just twenty-two, so she’s a character with a lot of room to grow. I’m currently neck-deep in writing the sequel to THE EDGE OF NORMAL, which picks up Reeve’s story a year later.

What’s next for you?
I’ve been caught up in a flurry of appearances for the launch of THE EDGE OF NORMAL, but it’s hard to concentrate on the road. I’m anxious to unpack, do the laundry, and get back to writing.

Read my review of THE EDGE OF NORMAL 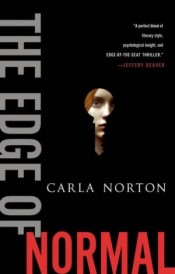 About THE EDGE OF NORMAL:
In many ways, Reeve LeClaire looks like a typical twenty-two year old girl. She’s finally landed her own apartment, she waitresses to pay the bills, and she wishes she wasn’t so nervous around new people. She thinks of herself as agile, not skittish. As serious, not grim. But Reeve is anything but normal.

Ten years ago, she was kidnapped and held captive. After a lucky escape, she’s spent the last six years trying to rebuild her life, a recovery thanks in large part to her indispensable therapist Dr. Ezra Lerner. But when he asks her to help another girl rescued from a similar situation, Reeve realizes she may not simply need to mentor this young victim—she may be the only one who can protect her from a cunning predator who is still out there, watching every move.

From the author of the #1 non-fiction bestseller Perfect Victim: The True Story of the Girl in the Box comes a novel that draws you into a chilling and engrossing world. With powerfully gripping characters and an ending that is a masterpiece of deception, Carla Norton’s The Edge of Normal is a stunning debut thriller.