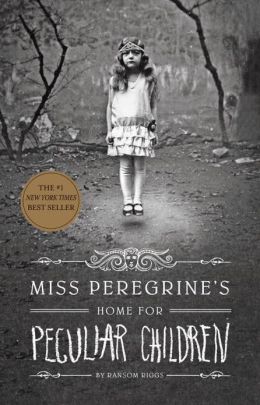 Miss Peregrine’s Home for Peculiar Children by Ransom Riggs (Quirk Books-June, 2011)-You’ve probably noticed that when I review a YA title, I usually feel the need to mention how hard I tend to be on YA. Not because there isn’t plenty of wonderful YA fiction, it’s just that sometimes it’s way too hard for me, at my age, to identify with young protagonists who are at wildly different points in their lives. So, that said, when I do review a YA title, I consider it exceptional indeed, and Miss Peregrine’s Home for Peculiar Children is about as exceptional as they get. Since it was published in 2011, it’s gotten so many glowing reviews I started wondering if it really did live up to the hype, and after getting a paperback copy, finally decided to dive in. Peregrine is told in the voice of Jacob, relating the story of his muddle through his 16th year, as the child of a mother who is heir to a chain of drugstores and a father that can’t seem to complete anything of substance, moving from project to project, only to abandon it. Jacob has a rather aimless, poor-little-rich-kid vibe, and he’s aware of this, but when his beloved grandfather, Abe, whose health has been declining with alarming frequency, is attacked and killed outside his home, Jacob is aimless no more. In fact, it’s Jacob that finds his grandfather’s ravaged body, and imagines he sees a terrible face in the undergrowth, but it’s only his imagination, right?

Jacob feels there might be more to his grandfather’s story (especially after finding a very, very interesting letter), and on the advice of his therapist, he decides to visit a tiny island off the coast of Wales which supposedly houses the children’s home that Abe grew up in, and that Abe left to go fight in WWII. Jacob has seen photos of many of the children that supposedly lived at the home, and many of these photos contain oddities that Abe insists are the talents and abilities of some very different, and very special children. Jacob is understandably dubious as to the photos’ authenticity, but after arriving in Wales, accompanied by his father, he sets off to find the home, and among the wreckage, some very peculiar things begin to happen.

It’s immediately obvious from the moment you pick up this gorgeous book, that you’re going to have a unique experience. It’s a beautifully put together book, and interspersed among the narrative are the very pictures that are described within. There are sepia photos of each of the peculiar children that make up Miss Peregrine’s motley assortment, and I found myself flipping back to look at the pictures again and trying to keep myself from paging forward and spoiling the fun. What Jacob finds among the ruins of that long ago children’s home is a portal to another time and place, so magical and beautiful it defies description. However, where there is light, there is also darkness, and although Jacob is content to wile away the hours with his new friends, discovering their abilities and delighting in their company (especially that of the lovely, feisty Emma), something dark is indeed coming, and it could threaten this beautiful world that Jacob has found. Miss Peregrine’s Home for Peculiar Children is by turns heartbreakingly delicate and unflinching, fraught with wonder and danger, and sparkles with delightful and terrifying magic. I highly recommend this book to kids and adults alike, and have never experienced anything quite like it! Keep an eye out for the sequel, Hollow City, in January 2014.