Please welcome Suzanne Johnson back to the blog! ELYSIAN FIELDS, the 3rd installment in her urban fantasy series is out today, and she was kind enough to answer a few of my questions! We also have a copy of the book for giveaway, so be sure to check the details at the bottom of the post! 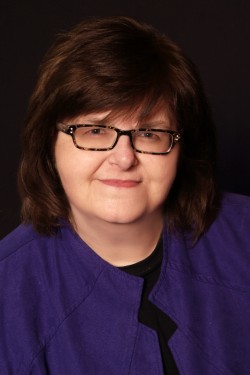 Whew! Three books in a little more than a year! Are you pleasantly exhausted? Did you ever think the series would go this far?
It has been a busy year, because in addition to the book releases I also had a lot of new responsibilities added to my day job as of January. So I hit the wall in late April or early May. After a couple of weeks, I got bored with mindless TV and Internet surfing and started writing again. Fortunately, my meltdowns never last long!

As for the series length, authors always go into a series hoping it will take off and have a chance to grow, but one never knows. Today’s is a tough publishing climate for new authors. But I love this world and these characters, and have an overarching plot that has further to go, so I’m excited to be able to do that.

What can we expect from Drusilla and the gang in the newest installment, Elysian Fields?
The power struggles that were feared in Royal Street and revved up a bit in River Road really begin to move to the forefront in Elysian Fields. On one level, we have DJ scrambling to survive—literally—in the midst of a maelstrom of both personal and political chaos. On a bigger level, though, she’s starting to realize that she’s becoming an unwitting (and unwilling) linchpin in some very high-level political maneuverings, and she doesn’t much like it.

Elysian Fields has mermen!! Will you tell us more about them?
I love mermen! Well, the mermen were front and center in the second book, River Road, where two clans of Cajun merfolk (who in my world are aquatic shapeshifters, born and not made) were fighting over territory, and DJ had to go in and mediate (with the help of the undead pirate Jean Lafitte, of course). By the end of that book, DJ had the unlikely friend of the head of the Delachaise mer clan, a guy named Rene. In Elysian Fields, Rene Delachaise comes back into the story to accompany DJ on some of her misadventures. They’re so much fun to write together! There’s no romance between them whatsoever, despite Rene being one very sexy fish, but they have a playful relationship. I think of their adventures as the wizard and merman version of a buddy movie. 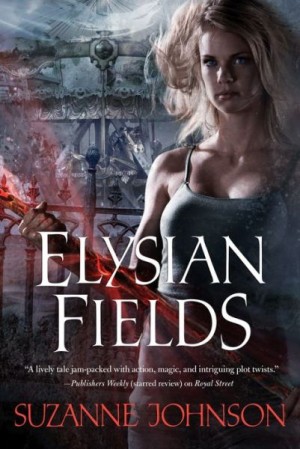 How do you think Drusilla has grown from the first novel?
She was very naive in the first book. She’d been through some bad things as a kid but really had a very sheltered upbringing. Hurricane Katrina, and the events that followed in New Orleans, stripped her of the people and things on which she’d based her identity: her mentor, her belief in who and what she was, her trust, her home and her city. So she’s had to reinvent herself and figure out who and what she is. In River Road, she began to grow into her powers more and trust her own instincts. In Elysian Fields, she’s learned that asking for help doesn’t make her weak. She’s slowly learning to open up her heart after so much loss. She has a long way to go but she’s getting there.

What do you love most about Drusilla, and why should we root for her?
DJ leads with her heart rather than her head more often than is healthy, but when she gets knocked flat, she gets back up and keeps going. She doesn’t whine. She doesn’t wallow in self-pity, even when she has a right to. She can have some snarkitude, but it’s usually at her own expense and is a defense mechanism to hide her vulnerability. And she’s creative. If she runs into a brick wall, she’ll find a way around it even if it means being a little “entrepreneurial” in her methods. (In other words, what the wizarding Elders don’t know won’t hurt them.) She isn’t your typical kickass urban fantasy heroine; she has to work for whatever she gets.

Read any good books lately?
Ahhhh, I have so little time to read these days! I did recently finish a couple of good ones, though. Alex Bledsoe’s second Tufa novel, Wisp of a Thing, a rural fantasy set in the hills of Tennessee, was just amazing. I also really enjoyed Delilah Devlin’s Lost Souls, the second book in her Caitlyn O’Connell urban fantasy series.

What’s one piece of advice that you would give to struggling writers?
Be persistent, treat writing as a priority in your life, and work at improving your craft—never quit learning. There are so many great online writing workshops available these days. I still try to sign up for one or two a year.

What’s next for you (and Drusilla?)
Elysian Fields sets some big wheels in motion that will have a lot of repercussions for DJ personally and for the wizarding world, so I’m already at work on plotting out the big story arcs for books four and five in the series. I don’t have release dates on those in 2014, but the tentative titles are Pirate’s Alley and Belle Chasse.

GIVEAWAY DETAILS
1.) You MUST fill out the form below (if you’ve signed into Rafflecopter before, it will remember you!)
2.) Giveaway is for 1 copy of ELYSIAN FIELDS by Suzanne Johnson to 1 winner
3.) Giveaway is open to US residents only
4.) You must enter on or before 8/20/13
5.) Giveaway book courtesy of Tor
6.) Please see my Giveaway Policy.

About ELYSIAN FIELDS:
The mer feud has been settled, but life in South Louisiana still has more twists and turns than the muddy Mississippi.

New Orleanians are under attack from a copycat killer mimicking the crimes of a 1918 serial murderer known as the Axeman of New Orleans. Thanks to a tip from the undead pirate Jean Lafitte, DJ Jaco knows the attacks aren’t random—an unknown necromancer has resurrected the original Axeman of New Orleans, and his ultimate target is a certain blonde wizard. Namely, DJ.

Combating an undead serial killer as troubles pile up around her isn’t easy. Jake Warin’s loup-garou nature is spiraling downward, enigmatic neighbor Quince Randolph is acting weirder than ever, the Elders are insisting on lessons in elven magic from the world’s most annoying wizard, and former partner Alex Warin just turned up on DJ’s to-do list. Not to mention big maneuvers are afoot in the halls of preternatural power.

Suddenly, moving to the Beyond as Jean Lafitte’s pirate wench could be DJ’s best option.