Yesterday, I gave you my 13 most anticipated reads for August 2013 in SF/F/Horror. Today I’ve got the 10 books that I’m especially looking forward to in the mystery/suspense category (click on the covers to pre-order)! These are in no particular order. August is a helluva month for suspense! 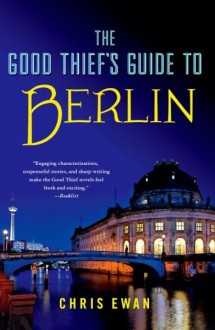 Synopsis-You can’t keep a good thief down . . . Charlie Howard is back and robbing the city of Berlin blind, until he witnesses a murder being committed right before his eyes

Charlie Howard, part-time writer, part-time thief, has been engaged in a veritable spree of larceny and misappropriation since moving to Berlin, Germany. He’s supposed to be working on his next novel. But high rent and a love for thrill-seeking has been hard on his word count.

But Charlie’s larcenous binge is interrupted by the call to duty—on behalf of Her Majesty’s Government. Four embassy employees are suspected of stealing a sensitive item. Charlie is to break into their homes, find the culprit and recover the stolen property. But there’s a catch. The item is so sensitive, Charlie isn’t told what he’s looking for. Not its size, not its weight, nothing. He’s only told that he’ll recognize it when he sees it.

Charlie has been a successful thief because he follows his own rules, the first being “Don’t get caught.” Well, after he enters the first suspect’s home, he has to add a new rule: “Don’t admire the view.” As Charlie stares across the street, he sees something he really wishes he hadn’t—a woman being murdered. And that’s just for starters. What follows is a wild adventure in the former cauldron of spies. 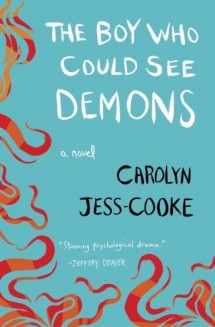 The Boy Who Could See Demons by Carolyn Jess-Cooke (Random House-August 13th)_
Synopsis-Bestselling author Carolyn Jess-Cooke has written a brilliant novel of suspense that delves into the recesses of the human mind and soul—perfect for fans of Gillian Flynn and Lisa Unger. The Boy Who Could See Demons follows a child psychologist who comes up against a career-defining case—one that threatens to unravel her own painful past and jeopardizes the life of a boy who can see the impossible.

Dr. Anya Molokova, a child psychiatrist, is called in to work at MacNeice House, an adolescent mental health treatment center. There she is told to observe and assess Alex Connolly, a keenly intelligent, sensitive ten-year-old coping with his mother’s latest suicide attempt. Alex is in need of serious counseling: He has been harming himself and others, often during blackouts. At the root of his destructive behavior, Alex claims, is his imaginary “friend” Ruen, a cunning demon who urges Alex to bend to his often violent will.

But Anya has seen this kind of behavior before—with her own daughter, Poppy, who suffered from early-onset schizophrenia. Determined to help Alex out of his darkness, Anya begins to treat the child. But soon strange and alarming coincidences compel Anya to wonder: Is Alex’s condition a cruel trick of the mind? Or is Ruen not so make-believe after all? The reality, it turns out, is more terrifying than anything she has ever encountered.

A rich and deeply moving page-turner, The Boy Who Could See Demons sets out to challenge the imagination and capture the way life takes unexpected turns. In the best storytelling tradition, it leaves the reader changed. 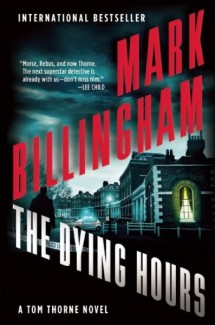 The Dying Hours by Mark Billingham (Grove/Atlantic-August 6th)
Synopsis-A fantastic, never-before-published Tom Thorne novel by England’s crime king.
It’s been twenty-five years since Tom Thorne last went to work wearing the “Queen’s cloth” but now, having stepped out of line once too often, he’s back in uniform. He’s no longer a detective, and he hates it.

Still struggling to adjust, Thorne becomes convinced that a spate of suicides among the elderly in London are something more sinister. His concerns are dismissed by the Murder Squad he was once part of and he is forced to investigate alone.

Now, unable to trust anybody, Thorne risks losing those closest to him as well as endangering those being targeted by a killer unlike any he has hunted before. A man with nothing to lose and a growing list of victims. A man who appears to have the power to make people take their own lives. 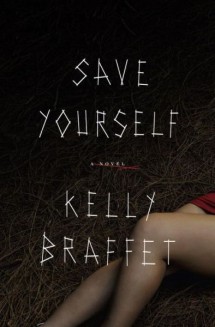 Save Yourself by Kelly Braffet  (Crown-August 6th)
Synopsis-Patrick Cusimano’s life can’t get much worse. His father is in jail, he works the midnight shift at a grubby convenience store, and his brother’s girlfriend, Caro, has pushed their friendship to an uncomfortable new level. On top of all that, he can’t shake the attentions of Layla Elshere, a goth teenager who befriends Patrick for reasons he doesn’t understand, and doesn’t fully trust. The temptations these two women offer are pushing Patrick to his breaking point.

Meanwhile, Layla’s little sister, Verna, is suffering through her first year of high school. She’s become a prime target for her cruel classmates, and not just because of her strange name and her fundamentalist parents. Layla’s bad-girl rep casts a shadow too heavy for Verna to bear alone, so she falls in with her sister’s tribe of outcasts. But their world is far darker than she ever imagined… 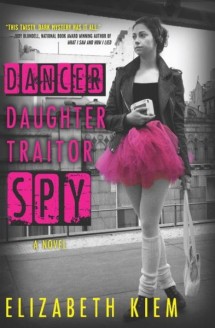 Marina is born of privilege. Her mother, Sveta, is the Soviet Union’s prima ballerina: an international star handpicked by the regime. But Sveta is afflicted with a mysterious second sight and becomes obsessed with exposing a horrific state secret. Then she disappears.

Fearing for their lives, Marina and her father defect to Brooklyn. Marina struggles to reestablish herself as a dancer at Juilliard. But her enigmatic partner, Sergei, makes concentration almost impossible, as does the fact that Marina shares her mother’s “gift,” and has a vision of her father’s murder at the hands of the Russian crooks and con artists she thought they’d left behind.

Now Marina must navigate the web of intrigue surrounding her mother’s disappearance, her ability, and exactly whom she can—and can’t—trust. 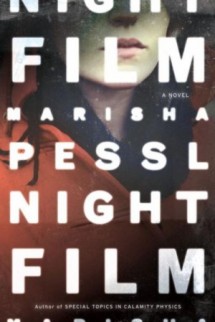 On a damp October night, beautiful young Ashley Cordova is found dead in an abandoned warehouse in lower Manhattan. Though her death is ruled a suicide, veteran investigative journalist Scott McGrath suspects otherwise. As he probes the strange circumstances surrounding Ashley’s life and death, McGrath comes face-to-face with the legacy of her father: the legendary, reclusive cult-horror-film director Stanislas Cordova—a man who hasn’t been seen in public for more than thirty years.

For McGrath, another death connected to this seemingly cursed family dynasty seems more than just a coincidence. Though much has been written about Cordova’s dark and unsettling films, very little is known about the man himself.

Driven by revenge, curiosity, and a need for the truth, McGrath, with the aid of two strangers, is drawn deeper and deeper into Cordova’s eerie, hypnotic world.

The last time he got close to exposing the director, McGrath lost his marriage and his career. This time he might lose even more.

Night Film, the gorgeously written, spellbinding new novel by the dazzlingly inventive Marisha Pessl, will hold you in suspense until you turn the final page.

I’ve already reviewed this one, and trust me, it’s an absolute MUST READ! 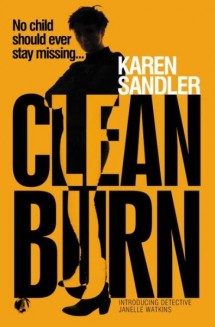 But when two clients beg for her help, one to find her missing 11-year-old son and the other to find a toddler who’s vanished, Janelle can’t say no. Even though it means returning to the scene of her nightmares – her hometown of Greenville.

Janelle enlists the aid of her ex-partner and ex-lover, Greenville County Sheriff Ken Heinz – but in the midst of their investigation, two other children are discovered missing and connected to Greenville.

Then Ken’s niece disappears on her way to school.

Janelle and Ken find themselves in a race against the clock. Will they find the missing children in time, or will history repeat itself? 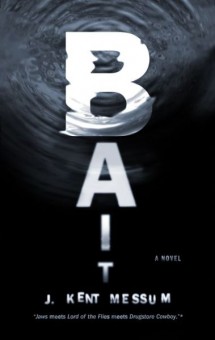 Bait by J. Kent Messum (Penguin-August 27th)
Synopsis-No one is coming to your aid. We have ensured this.

Six strangers wake up on a remote island in the Florida Keys with no memory of their arrival. They soon discover their common bond: all of them are heroin addicts. As the first excruciating pangs of withdrawal make themselves felt, the six notice a yacht anchored across open water. On it lurk four shadowy figures, protected by the hungry sharks that patrol the waves. So begins a dangerous game. The six must undertake the impossible—swim to the next island where a cache of heroin awaits, or die trying. When alliances form, betrayal is inevitable. As the fight to survive intensifies, the stakes reach terrifying heights—and their captors’ motives finally begin to emerge. 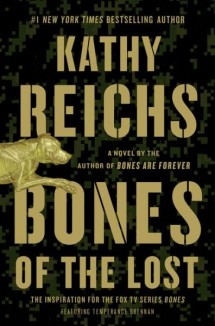 Bones of the Lost by Kathy Reichs (Scribner-August 27th)
Synopsis-When Charlotte police discover the body of a teenage girl along a desolate stretch of two-lane highway, Temperance Brennan fears the worst. The girl’s body shows signs of foul play. Inside her purse, police find an airline club card bearing the name of prominent local businessman John-Henry Story, who died in a horrific fire months earlier. How did Story and the girl know each other? Was she an illegal immigrant turning tricks? Was she murdered? Was he?

Tempe must also examine a bundle of Peruvian dog mummies confiscated by U.S. Customs. A Desert Storm veteran named Dominick Rockett stands accused of smuggling the objects into the country. Could there be some connection between the trafficking of antiquities and the trafficking of humans?

As the complications pile on, Tempe must also grapple with personal turmoil. Her daughter, Katy, grieving the death of her boyfriend in Afghanistan, impulsively enlists in the army. Meanwhile, Katy’s father, Pete, is growing frustrated by Tempe’s reluctance to finalize their divorce. As pressure mounts from all corners, Tempe soon finds herself at the center of a conspiracy that extends all the way from South America to Afghanistan and right to the center of Charlotte. 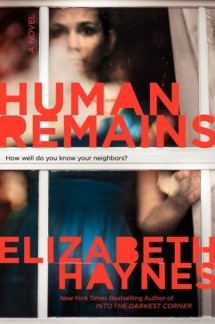 Police analyst Annabel wouldn’t describe herself as lonely. Her work and the needs of her aging mother keep her busy. But Annabel is shocked when she discovers her neighbor’s decomposing body in the house next door, and she is appalled to think that no one, including herself, noticed the woman’s absence. Annabel sets out to investigate, despite her colleagues’ lack of interest, and discovers that such cases are frighteningly common in her hometown.

A chilling thriller and a hymn to all the lonely people whose individual voices haunt its pages, Human Remains shows how vulnerable we are when we live alone, and how easily ordinary lives can fall apart when no one is watching. 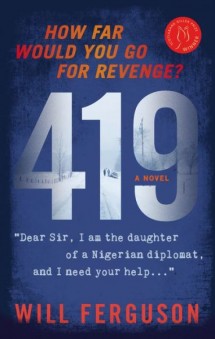 419 by Will Ferguson (Pintail-August 27th)
Synopsis-Will Ferguson takes readers deep into the labyrinth of lies that is “419,” the world’s most insidious Internet scam.

A car tumbles through darkness down a snowy ravine.

A woman without a name walks out of a dust storm in sub-Saharan Africa.

And in the seething heat of Lagos City, a criminal cartel scours the Internet, looking for victims.

Lives intersect. Worlds collide. And it all begins with a single email: “Dear Sir, I am the daughter of a Nigerian diplomat, and I need your help”

When Laura Curtis, a lonely editor in a cold northern city, discovers that her father has died because of one such swindle, she sets out to track down—and corner—her father’s killer. It is a dangerous game she’s playing, however, and the stakes are higher than she can ever imagine.

Woven into Laura’s journey is a mysterious woman from the African Sahel with scars etched into her skin and a young man who finds himself caught up in a web of violence and deceit.

And running through it, a dying father’s final words: “You, I love.”