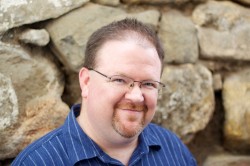 I’ve had the pleasure of hosting Kevin Hearne here on the blog a few times now, and this time is no exception, with the release of the 6th installment of the Iron Druid Chronicles, HUNTED. I caught up with Kevin, and he’s also got a signed copy of HUNTED for one lucky winner, so be sure to check out the details at the bottom of the post!

Please welcome Kevin back to the blog!

So…Hunted! Oh my gosh! So many gods! How did you keep it all straight?
They group themselves nicely into pantheons and it helps. And it also helps that the myths surrounding the gods are often quite memorable. The ancient Greco-Romans came up with some pretty batshit stuff that I’d be hard pressed to equal without significant pharmaceutical aid. 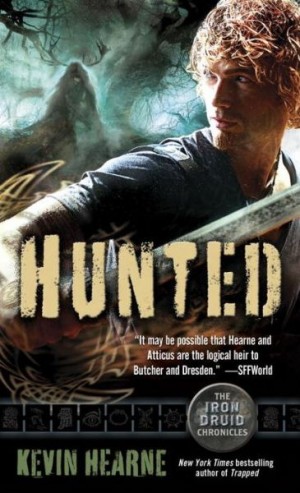 You’re touring for Hunted. Are you excited?
Yeah, it’s been fabulous so far. Got my first Atticus and Morrigan cosplayer in Redondo Beach. Also got to meet author Stephen Blackmoore there and the artist who did the map in TRAPPED, Priscilla Spencer. A dude in Menlo Park gave me a fountain pen that he made himself, and now I’m using it to sign all the books. Someone in Davis gave me whiskey cookies. Plus I’m getting some great questions from the readers!

There were a few shockers in Hunted. Did you have those planned out way ahead of time? Will you give us a bit of a walkthrough of your writing process for us nosy types?
Some were planned and some were surprises to me as well! I do have an outline for my books, but that outline isn’t the boss of me. I ignore it whenever inspiration strikes and go with it. Outlines help me stay productive every day but never constrain my creative impulses.

Most folks assume that the main character is the most fun to write, but other than Atticus, who is awesome, who do you especially enjoy writing about?
I actually looooove writing Granuaile. She has such a different voice and is more given to waxing poetic than Atticus.

Loki brings the crazy, and then some, in Hunted…how much crazier can we expect things to get in the next book (no spoilers expected, of course)?

SHATTERED ratchets up some stuff significantly but also resolves a major series plot line. And we have two major new characters developed as well as an old character that’s been in the series from the beginning but has never been developed until now.

What else is new with you? Is there anything else you‘d like to share?
I’m looking forward to visiting Houston on July 27 at Murder By the Book to sign the CARNIEPUNK anthology with Jaye Wells, Nicole Peeler, Mark Henry, and Delilah S. Dawson! There’s an Iron Druid short story in there detailing what happens when Granuaile drags Atticus back to Kansas to visit her mother.

And peering down the road, I’m going to be writing the Star Wars novel in the second half of this year and then begin working on an epic. So excited to take on some new projects! But after the epic I’ll return to the Iron Druid Chronicles and write book eight. Thanks very much for having me!

About HUNTED:
For a two-thousand-year-old Druid, Atticus O’Sullivan is a pretty fast runner. Good thing, because he’s being chased by not one but two goddesses of the hunt—Artemis and Diana—for messing with one of their own. Dodging their slings and arrows, Atticus, Granuaile, and his wolfhound Oberon are making a mad dash across modern-day Europe to seek help from a friend of the Tuatha Dé Danann. His usual magical option of shifting planes is blocked, so instead of playing hide-and-seek, the game plan is . . . run like hell.

Crashing the pantheon marathon is the Norse god Loki. Killing Atticus is the only loose end he needs to tie up before unleashing Ragnarok—AKA the Apocalypse. Atticus and Granuaile have to outfox the Olympians and contain the god of mischief if they want to go on living—and still have a world to live in.

1.) You MUST fill out the form below (if you’ve signed into Rafflecopter before, it will remember you!)
2.) Giveaway is for 1 SIGNED copy of HUNTED by Kevin Hearne to 1 winner
3.) Giveaway is open to US residents
4.) You must enter on or before 7/16/13
5.) Giveaway book courtesy of Kevin Hearne
6.) Please see my Giveaway Policy.