Martin Walker is the author of the highly acclaimed Bruno series, and the 5th installment, THE DEVIL’S CAVE, just came out this month! Martin was kind enough to talk about the series, and much more (it’ll make you hungry, and want to go to France), so please welcome him to the blog! 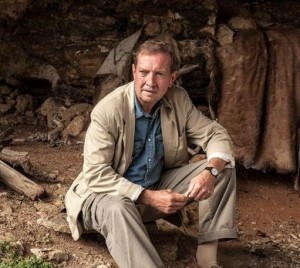 You have a rich and distinguished background in editing, journalism, broadcasting, and so much more! You’re also the author of several non-fiction works. Will you tell us a little about what led you to begin writing fiction?
Starting to live in the lovely Vézère valley in south-west France, with its prehistoric cave paintings and medieval chateaus and its wonderful food and wine, I felt compelled to write about it. My first novel, The Caves of Perigord, was an attempt to understand and imagine what kind of society could have produced the great cave paintings of Lascaux and what connects us to that time, 17,000 years ago. And then my local policeman became a good friend and tennis partner and I wanted to write about a thoroughly decent man, a local character through whom I could write about today’s world, and Bruno was born.

The brand new installment in your Benoît “Bruno” Courrèges series, The Devil’s Cave, just came out! Will you give us a teaser about what’s in store for Bruno?
The 6th Bruno novel, The Resistance Man, comes out in the U.S. next year. It starts with the reappearance of some World War Two French banknotes, loot from a famous train robber by the Resistance. Then an antique dealer is found murdered and the home of a retired British intelligence chief is burgled, and Bruno faces three parallel investigations and some stunning news from Isabelle. 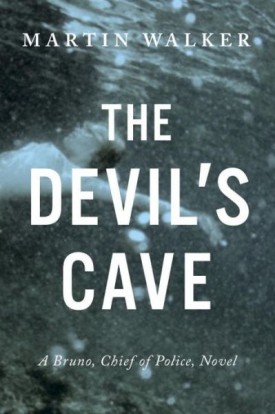 What do you enjoy most about writing the character of Bruno? Is he based on anyone in particular?
He is loosely based on my local policeman, who teaches me to hunt and to cook and with whom I help run the local kids’ rugby teams. Right now we are organizing the village feu de St Jean, a mid-summer night festival when we all bring food and wine and husbands and wives leap hand in hand over the ashes of the bonfire to put behind us all the last year’s rows and arguments and start anew. I really enjoy writing about an old-fashioned hero, a generous and honorable man who knows the difference between the letter of the law and justice.

Will you tell us a little about your writing process and what sort of research you do for the series?
Once I have prepared the synopsis, I set myself a target of at least a thousand words, or three pages, every day, no matter what else I am doing. Whether I am traveling or working on another project or attending a conference, I still have to produce those three pages. So the synopsis and research take a long time, often in the Centre Jean Moulin, a big Resistance archive in Bordeaux. For The Devil’s Cave I was in the national archives in Paris, looking up transcripts of interrogations by the Inquisition and accounts of 17th century heresy trials. And I learned a lot about local Resistance activities and life under Nazi occupation by interviewing elderly neighbors over a glass of Monbazillac.

Food plays a big part in the Bruno series! What are some of your favorite dishes?
The Périgord is the gastronomic heartland of France, famed for its foie gras and truffles and its wildfowl and game, and I love them all. The local cheeses are great and the rivers teem with trout and crayfish. We raise our own chickens and pheasants, and in summer we live from the vegetable garden. So a perfect meal would be fresh tomato and basil soup, made with stock from a duck carcass, followed by foie gras, then some crayfish with home-made mayonnaise. The main course would be blanquette de veau with petit pois from the garden. We’d take a brief pause with a glass of Armagnac before the salad and cheese, and we’d end with a peach plucked straight from the tree and still warm from the sun. I’d serve a glass of chilled Monbazillac with the foie gras, then a Bergerac Sec white from Chateau Jaubertie and a red Pécharmant from Chateau de Tiregand with the veal and the cheese. 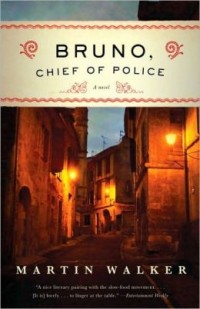 The series’ setting in France is almost a character unto itself, and I’ve read that you live in France part time. What do you love most about living there, and where would you take someone visiting there for the first time?
Apart from the climate, the landscape, the food and wine, I love the sense of living amid so much history. The Vézère is the place on earth where we know people have lived continuously for over 70,000 years. So the first stop would be the Lascaux caves and its 17,000-year old paintings. Nobody who sees it will ever again think of cavemen as primitive people. These distant ancestors of ours had an artistic and spiritual sense that is immediately recognizable to us across the millennia. And a visit to Lascaux comes with the realization that it is the urge to create and to respond to art that is uniquely human.

You’ve undoubtedly influenced many other mystery writers, but who are some of your biggest influences?
As a child, I was entranced by Sherlock Holmes. More recently, I revere John le Carre and Alan Furth, Graham Greene and Colin Dexter. And my old college and friend Christopher Hitchens was a great influence of a different kind; he was best man at our wedding and we miss him still.

When you manage to find some free time, how do you like to spend it?
I like to ski in the winter, to play tennis and enjoy the swimming pool in summer, to potter in the vegetable garden, to visit vineyards and to cook.

What’s next for you?
I’m working on a Bruno cookbook with my wife, and on the 7th Bruno novel, in which a mysterious legacy leads back to some Jewish children who were sheltered from the Nazis in Bruno’s town of St Denis, while a young Muslim who was raised in St Denis suddenly turns up at a French army base in Afghanistan. oh 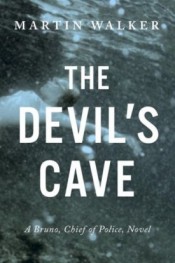 About THE DEVIL’S CAVE:
It’s spring in St. Denis. The village choir is preparing for its Easter concert, the wildflowers are blooming, and among the lazy whorls of the river a dead woman is found floating in a boat. It’s another case for Bruno, the town’s cherished chief of police. With the discovery of sinister markings and black candles near the body, it seems to him that the occult might be involved. And as questions mount—regarding a troubling real estate proposal in the region; a suspicious, violent death made to look accidental; and the sudden reappearance of a politically controversial elderly countess—Bruno and his colleagues and friends are drawn ever closer to a climactic showdown in the Gouffre de Colombac: the place locals call the Devil’s Cave.

With the enchanting backdrop of France’s pastoral heartland, a cast of local characters as vibrant as their surroundings, enough sumptuous repasts to satisfy any literary gourmand, and a hero winningly capable of balancing the good life with a dogged dedication to solving the crimes that threaten it, The Devil’s Cave invites readers to raise a glass and turn the page.