Blood and Feathers by Lou Morgan was one of my favorite books of 2012, and she’s back with the 2nd book in the series, Blood and Feathers: Rebellion (just out yesterday!) Lou was kind enough to chat about the new book, and much more, so please welcome her back to the blog! 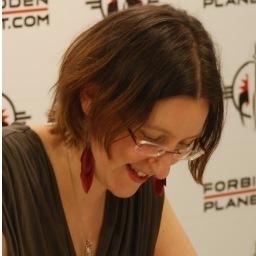 I can’t believe it’s been about a year since Blood and Feathers came out! How’s this whole published thing been treating you since then?
I almost feel like a grown-up. I say “almost” because I think that’s probably as close as I’ll ever get to it.

Over the last year, I’ve learned a lot more about publishing and writing – and I hope I’m a better writer now than I was a year ago (and hope that next year, I’ll be able to say the same again, and the year after that…). Working with Solaris again has been great, and people said some lovely things about Blood and Feathers, which made me very happy indeed. It’s just been nominated for two British Fantasy Awards – both in the best newcomer category and, somewhat staggeringly, for best fantasy novel. That was a bit of a shock.

I still feel so lucky to be able to say that making things up and telling stories is my job. It’s a hugely privileged position, and it’s not one that I take for granted. We’re very fortunate to have such a sense of community in the genre field, and it’s a great thing to be able to contribute to it on any level. 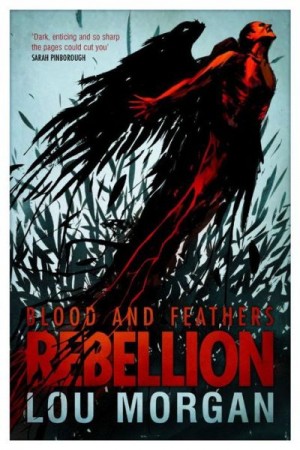 Luckily, the second installment of the series, Blood and Feathers: Rebellion, is here! Will you give us the scoop on what Alice will face in Rebellion?
Rebellion picks up about six months after the end of the first book – which is long enough for Alice to have got her bearings again after everything that happened to her, but not necessarily long enough for her to find her feet. As the Fallen’s grip on the world tightens and everything falls to pieces, she’s drawn even further into the angels’ fight – all the while trying to adjust to her new life and hold down a job. Admittedly, she is working for the Angel of Death, but even he has standards.

While Alice has her own problems to deal with, Mallory’s past comes back to haunt them all, and the Archangel Michael’s determination to defeat Lucifer threatens to consume him – and everyone else…

Will you tell us a bit about your writing process?
Like the rest of me, it’s fairly shambolic. I try to write as solidly as I can between about 10am and 2pm in the week while my little boy’s at school. When he gets home in the afternoon, it’s theoretically possible to do a bit more, but knowing you could be interrupted at any moment by someone charging in shouting: “Mum, mum, I put a sock on the cat and now he’s run off and my sword is stuck up the tree and my football’s under the car and what do you get if you add sixty and sixty and a hundred and why is the moon round and can I have a snack?” is a little distracting.

I’m a bit of a magpie when it comes to ideas, so I’ve usually got a few notebooks around the place when I’m working: things get jotted down in there and may or may not end up being used in a story. I’ve become quite a plotter – so before I start anything I’ve got a fairly good idea of where it’s going to go – and there’s a fair bit of research behind Rebellion, so that’s normally to hand. Between the two books, I’ve looked up some utterly bizarre things ranging from cattle branding to Lichtenberg figures, electrical burns, shotguns capable of firing gas cartridges, Rodin sculptures, funeral parlours, Enochian script, reports on wild dog attacks, news footage of riots, Greek myths and the height of Mont Saint Michel in France. My internet search history (hello, PRISM!) is absurd.

What do you love most about writing fantasy?
The sheer scope of it. It’s wonderful. Writing fantasy is complete freedom. A reader who has picked up a fantasy book has already decided that they want something beyond the ordinary and everyday: they want to be shown something else. Fantasy – whether you’re writing it or reading it – is a lens for viewing the world we know; it’s making the familiar unfamiliar and giving us a new way of seeing it. In my case, it’s choices and redemption and responsibility and friendship and family and faith… and for that, you couldn’t ask for a better sandbox to play in than fantasy. 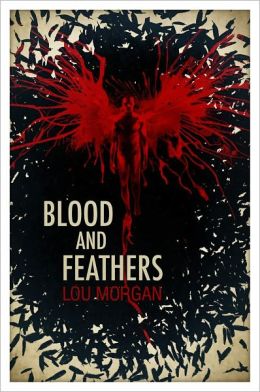 Read any good books lately?
I’ve been making a big effort to read more this year and keep track of what I’m actually managing to get through on Pinterest (my boards are here: http://pinterest.com/loumorganauthor/, if you’re interested). In the past I’ve found that I get to December and can barely remember what I’ve read over the last 12 months, so I’m hoping this will help.

I’ve not long finished Kim Curran’s Control, the sequel to Shift. They’re both fantastically-paced YA books with a great protagonist, and they’re huge fun. I was sent a copy of Angelfall by Susan Ee, which I’d heard a lot about but hadn’t got around to reading. It was really interesting to see what someone else is doing with angels right now, and I’ll be keeping an eye out for the rest of the series. My favourite book so far this year, though, is Michael Marshall’s We Are Here. I’m a huge fan of his work, and have been for years. It’s almost impossible to talk about it without spoiling the surprises in there, but it’s a very unsettling story which begins when the narrator is approached by a woman who thinks she’s being followed…

What’s one piece of advice you would give to a struggling author?
I’m not sure I’m best placed to be giving advice – after all, most days I feel like a tremendous fraud and I’m terrified that someone’s going to find me out and tell me I’m not allowed to do this any more. That being said, the best advice I could give to any writer including myself (unashamedly cribbed from Joss Whedon and Neil Gaiman: two people who know what they’re talking about far better than I do!) comes in a few parts.

First is to read. Read everything. Read fiction – of all kinds – read non-fiction. Read newspapers, magazine articles, read the back of cereal packets if that’s all there is. The more you read, the more you fill the tanks. Other people’s words, other people’s stories: they’re also fuel. They will drive you, they will inspire you.

The second part of this is finish what you start. Even if you think it’s dire, finish the story instead of binning it. At the very least, you’ll learn something – and you may even find the way to fix it. The road to hell is littered with abandoned stories, and they blow around and make the place look untidy. And we can’t have that.

Above all else: be you. Don’t try to copy anyone; write as yourself, for yourself. If you can’t be your own enthusiastic reader, why should anyone else be?

How are you spending your free time these days?
Free time. That’s a thing? One way or another (particularly with a five year-old, and having moved house earlier this year) it doesn’t feel like there’s a lot of that lately!

I go to the theatre when I get the chance, which I love, and having recently blasted through all seven seasons of The West Wing on DVD, I’ve decided I’d quite like Aaron Sorkin’s brain in a jar on my desk.

It always seems to surprise people that I like gardening, but I do – and again, having moved into a house with a garden that hadn’t been touched in the best part of a decade means I’ve got my hands full there!

Also, sleep. Sleep is a good thing. I miss it.

What’s next for you, this year and beyond?
This year’s shaping up to be a busy one: with Rebellion launching this month, there’s plenty to do there. I’m also working on something new – a YA novel, which is completely different and which I haven’t got a clue what I’m going to do with but which I’m really enjoying writing – and I have a couple of short stories knocking around. One of those will appear in Jurassic’s Egyptian mummy-themed Book of the Dead anthology, and I’m hugely excited to be involved in that.

I’ll be turning up at a few conventions in the UK over the summer because I love a good convention and it’s very, very hard to keep me away from them! Speaking of conventions, come this year’s World Fantasy Convention in October, I’ll be putting on a different hat as I’m part of the team running it. This may well be connected to the “missing sleep” thing, and means that at the moment I’m mentally blocked from seeing beyond the start of November and the last day of the convention.

Maybe I’ll sleep after that. Maybe not. Who needs sleep, anyway?

About BLOOD AND FEATHERS: REBELLION:
This is the thrilling follow-up to Blood and Feathers, one of the most highly-regarded debuts of 2012. The battle between the Fallen and the Angels has turned into open warfare, on the streets of London.

“This is a war. The war. There is no stopping; no getting out. You’re in this – just like the rest of us – to the end.” • Driven out of hell and with nothing to lose, the Fallen wage open warfare against the angels on the streets. And they’re winning.• As the balance tips towards the darkness, Alice – barely recovered from her own ordeal in hell and struggling to start over – once again finds herself in the eye of the storm. But with the chaos spreading and the Archangel Michael determined to destroy Lucifer whatever the cost, is the price simply too high… and what sacrifices will Alice and the angels have to make in order to pay it? • The Fallen will rise. Trust will be betrayed. And all hell breaks loose…