The Collector series by Chris F. Holm is one of my favorites, and he’s always a pleasure to have on the blog! Chris was kind enough to chat about the upcoming installment, The Big Reap (out July 30th), and more!

Please welcome Chris back to the blog! 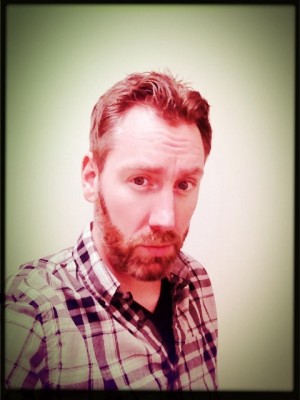 Welcome back to the blog, Chris! A year and a half (give or take), and five (can’t forget DEAD LETTERS and 8 POUNDS) books later…whew! Are you totally, happily exhausted?
Thanks! I’m delighted to be back.

It’s funny – if you’d asked me that six months ago, I would have said GOOD GOD YES. Last year was a crazy fever dream of awesome. I had two books come out. Wrote the better part of two others. Hit up conferences in Quebec, Cleveland, and Muskego. Read to packed houses. Read to empty houses. Did countless guest posts, podcasts, and interviews. All while holding down a full-time day job. It was insane. Amazing. Exhausting. I ran myself into the ground. I caught the flu – twice. Looking back, I’m kind of shocked I made it out alive.

But then, in January, things got quiet. I turned in THE BIG REAP, looked at my calendar, and realized I had no appearances or obligations scheduled. I thought it’d be a nice break – and it was, for like a week. Then I started getting antsy. I put out a Kindle short collection, DEAD LETTERS. Wrote a couple new short stories for submission. Put together a pitch for a new series. And then sat on my hands and watched the clock, while I waited for the crazy to come rolling ‘round again. There’s something oddly addictive about living life at so insane a pace.

The brand new book in your Collector series, THE BIG REAP, drops on the 30th. Will you give us a teaser as to what’s in store for Sam Thornton in this installment?
I’ve noticed an interesting trend with the early reviews of this novel: everybody’s been treading lightly with regard to spoilers. Stuff revealed so early I’d assume it was fair game has been treated like it’s the nuclear launch codes. It’s touching, actually; it means people are invested in the story and the characters, and want others to experience it the same way they did. So in deference to that sentiment, I’ll try to speak in generalities.

THE BIG REAP is, in many ways, the most epic tale of the series. It takes you back to Sam’s first shaky days as a Collector, to his first assignment – and believe you me, that assignment is a doozy. It also explores in some detail the complicated relationship between Sam and his handler, Lilith. And the questions of faith and redemption that have simmered for so long in the series boil over something fierce in this one.

Whenever I sit down to write a Collector novel, I decide on two things: the flavor of the novel, and the relationships I’d like to explore. In DEAD HARVEST, it was old-fashioned crime pulp and the perils of romantic love. In THE WRONG GOODBYE, I folded in some Lovecraftian horror and buddy-comedy, and tackled the complicated nature of friendship. For THE BIG REAP, I decided I wanted to riff on the classic monster movies that warped my brain as a kid, and explore the sometimes fractious nature of family. Eagle-eyed readers will find no shortage of horror-movie Easter Eggs. 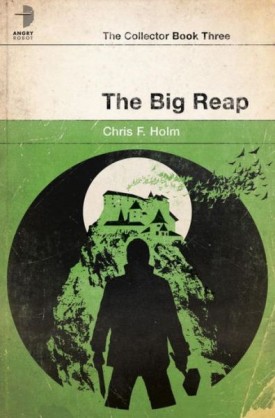 How do you think Sam has grown since DEAD HARVEST?
I think the Sam we met in DEAD HARVEST was hopeless – resigned to the fate that life assigned him. He had no friends, no support structure – no hope of absolution. He was in danger of reaching that tipping-point he so desperately feared, of losing his humanity.

The Sam of today has people who care deeply for him, and for whom he deeply cares. He’s got a greater sense of his place in the world, and an awareness that – damned or not – he can still shape it for the better. And I think he’s got a faint spark of hope that he can still be redeemed, even if only in his own mind.

What do you enjoy most about writing the series?
This is going to sound corny, but there is nothing I don’t love about writing this series. Its premise is such that I can write hardboiled one moment, and fantastical the next. I can write grotesque or terrifying or heartrending or funny. I can explore the questions of faith that I think we all – believers and nonbelievers alike – have rattling around in our heads. Sometimes, as a writer, you’ll be working on something and think, “I’d love to do ___, but it just doesn’t fit this story.” That’s never once happened to me while writing a Collector novel.

Will you take us through your writing process? Are you a plotter or a pantser?
It depends. I’ve outlined in the past. I’ve also used a partial outline as training wheels, and then abandoned it once the story started chugging along under its own steam. But for some reason, I’ve never outlined in the slightest when it comes to the Collector novels.

That’s not to say I don’t know where they’re going. Since the beginning of this series, I’ve held the major beats – not just of the book I’m working on, but of the larger arc as well – in my head; it’s mostly been a matter of connecting them, and trying to do them justice on the page.

For THE BIG REAP, I think my process could be described as “blind panic.” Once the deal for it was inked, I had six months to deliver it, and I knew the story I wanted to tell was a behemoth. So I spent every waking moment not at work with my fingers on the keyboard. I barely ate. Barely spoke. Just chipped away until it was done – trusting my instincts to steer me true, and my (and my lovely wife’s) editing skills to make sense of the mess afterward. 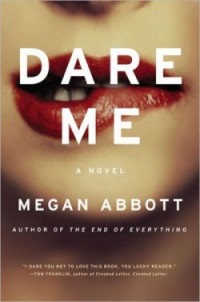 Read any good books lately?
One of the few gripes I have about this writing life is that it eats into my reading time something fierce (I think I’ve read through the three books I’ve been working on this calendar year something like fifteen times all told, which leaves little time for leisure reading), and what little I do read is often influenced by what I’m writing. I’ve been working on a mainstream thriller of late, so a lot of my reading has been in that vein. Hilary Davidson’s latest, EVIL IN ALL ITS DISGUISES, was terrific. GONE GIRL by Gillian Flynn really was as good as everybody says, but it still wasn’t as mind-bogglingly awesome as Megan Abbott’s DARE ME. I recently got around to reading Victor Gischler’s GUN MONKEYS, which I enjoyed the hell out of. Right now, I’m in the middle of my first Bond novel – Moonraker – and I’m bowled over by how much better it is than even the best of the Bond movies. And this past year or so, I’ve been on a big Le Carré kick; nobody does smart thrillers better.

What’s one of the most valuable lessons you’ve learned about being a published author, and what piece of advice would you give a struggling writer?
I’ve been publishing short stories for years now, so I thought I had a handle on what it meant to put words out into the world for folks to read. I was wrong. Having a couple widely available novels out is a whole ‘nother animal. Before, I was read by a cloistered few – genre insiders one and all. Now, anybody and everybody can read my stuff.

Some love it. Some hate it. Some like it fine, but think the guy who wrote it is kind of a dick. And they’re all perfectly willing to say so on the internet.

What it took me a while to realize was, that’s their right. I invited all that by putting myself and my ideas out there – but that doesn’t mean I have to take any of it personally. Just learning how to exist as an author in a world chock-a-block with social media – learning how to not let all the noise (good or bad) affect me – has been the biggest lesson I’ve had to internalize.

As far as the advice I’d give… this sounds trite, but wherever you are in your path to publication, try to enjoy it. It sucks to rack up rejection after rejection, but you know what? It means you’re fearless enough to keep putting yourself out there. There are days the words won’t come, and you’ll think you’re a talentless fraud. Congratulations – that just means you’re a real writer, because we’ve all been there. Let the tough stuff fuel you, not stop you in your tracks.

Oh, and here’s a bonus piece of advice, for free. These words of wisdom come not from me, but from Sandra Ruttan, who wrote years ago on her blog, “The first rule of networking is STOP TRYING TO NETWORK.” No one wants to do favors for a pushy stranger. No one wants to friend or follow a human spambot. What we do want is to hang out with people who like the sorts of stuff we like, and shoot the shit. Do that – make real and lasting friendships with readers, writers, and the like – and the rest will follow.

What’s next for you (and Sam)?
As I mentioned, I’ve been working on a mainstream thriller lately, based on my Anthony-nominated short story “The Hitter.” I’m hopeful it will see the light of day. I also recently finished a book that’s sort of a creepy small-town mystery/ghost story. We’ll see what comes of it.

As for Sam… there’s plenty of his story left to tell, provided there’s an audience that wants to read it. Publishing is a business, as much as we like to pretend it’s not. Which is to say I’ve not been contracted to write another – but given enough interest, that could certainly change…

About THE BIG REAP:
The Collector Book Three

Who Collects the Collectors?

Sam Thornton has had many run-ins with his celestial masters, but he’s always been sure of his own actions. However, when he’s tasked with dispatching the mythical Brethren – a group of former Collectors who have cast off their ties to Hell – is he still working on the side of right?