One of my favorite books of 2012 was The Last Policeman, and it even won an Edgar Award! Now, the 2nd novel in the trilogy, Countdown City is out in a couple of weeks, and Ben H. Winters kindly stopped by to chat about it, so please give him a very warm welcome!

Also, I happen to have an extra copy of Countdown City that I’m willing to hand over to one lucky winner, so be sure to check out the giveaway details at the end of the post! 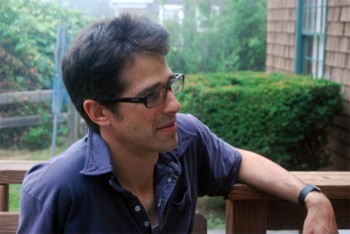 Ben, Countdown City, the 2nd book in your Last Policeman trilogy, will be out in July. Will you give us a bit of a teaser and tell us about what inspired you to write the series?
Countdown City, like The Last Policeman, focuses on a single case being worked by our hero, Detective Henry Palace. Once again Palace is determined to solve the case before him—this time a missing-person investigation—even though the whole world is crumbling because of the asteroid scheduled to destroy everything in just a few months. In Countdown City, Palace travels more (including to an isolated woodland fort, and to a communitarian encampment called the Free Republic of New Hampshire), he faces more physical danger (including one long, harrowing episode of violence that was the most painful thing I’ve yet had to write for him), and he’s generally even more stymied by his total lack of infrastructure and institutional support.

My inspiration for this book, as you might imagine, was a love of both detective fiction (PD James, Richard Price, Arthur Conan Doyle, etc etc etc) and a love of science-fiction, or more specifically speculative fiction. I love books that posit one massive change in our reality and see how that plays out. So, you know, Dick’s The Man in the High Castle, or Chabon’s The Yiddish Policeman’s Union. I thought it would be interesting to use a science-fiction sort of set up to take a classic form of investigator (who cares when no one else does…) and push that dogged, justice-serving kind of cat to the absolute extreme. 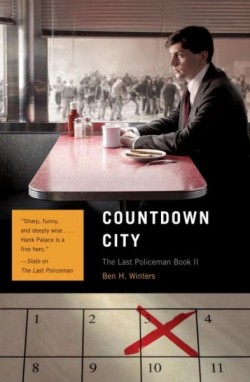 One of the things I love about Hank Palace is his dogged persistence in solving the case, no matter how much things are falling apart around him. Was there anything or anyone in particular that inspired his character?
It has been noted to me, since I started writing the trilogy, that Detective Palace bears a passing resemblance to my father, who is NOT a cop or an action hero, but who definitely has a sense of focus and a taking-of-good-care that you can see in my man Henry. He shares one of Palace’s most admirable traits, to my mind, even beyond the dedication to justice, which is just that refusal to be rushed. OK, sure, there’s a deadline, there’s outside forces—like, you know, the world is ending and all—but god damn it I’m going to take my time and get this thing right. To be honest, I wish I was more like that myself.

What kind of research have you done for the series?
I’ve done a ton of research for this, which I can’t complain about; to tell you the truth, research is my favorite part. I’ve talked to astrophysicists and astronomers, the cops and prosecutors, to life-insurance agents and drug addicts. For Countdown City, my favorite long interview was with a former Green Beret, who told me A) all about the work of military and paramilitary snipers, and B) battlefield medicine. Because when the world is ending, and the hospitals have mostly been closed or looted, all medicine is battlefield medicine.

What do you think attracts people to stories about Earth on the brink of disaster?
I’ve got a couple highfalutin theories on this subject, like “we read of the death of the world because we’re interested in our own death,” or “we are preparing ourselves, subconsciously, to handle fascinating situations we secretly with to face.” But at the end of the day, I think it’s a narrative issue: high stakes equals good drama, and what stakes could be higher than the end of time? 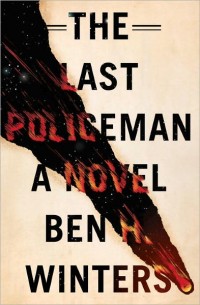 In your writing, are you a plotter or a pantser?
It’s a false dichotomy. Anyone who eschews outlining entirely is driving off a cliff, and anyone who sticks rigidly to their plan is building Ikea furniture, not writing a book. Make a plan, break it as you go, make a new plan, break that one too. Quit, start again, argue with yourself, pace, skip rope, have a snack, get back to work.

If there was a soundtrack for The Last Policeman series, what would be a few songs on it?
I know it would lead off with the Bob Dylan song “Slow Train Coming”, which is one of my favorites, one of Detective Palace’s favorites, and not coincidentally the original title of The Last Policeman. I’m fascinated by Dylan’s mid-career conversion to evangelical Christianity (and subsequent retreat from it)…and with questions of belief in the afterlife in general, as is probably reflected now and then in this very existential series of detective novels.

What’s next for you, this year and beyond?
I have a series of books of scary poetry for kids, the first of which comes out in July—it’s called Literally Disturbed and is enormous fun and totally different than all this crazy cops-and-asteroid stuff! But for now I’m working on Policeman book III (no title yet) and doing research for a new mystery series I’d like to write, once I’ve finished destroying planet Earth.

About COUNTDOWN CITY:
Now Detective Hank Palace returns in Countdown City, the second volume of the Last Policeman trilogy. There are just 77 days before a deadly asteroid collides with Earth, and Detective Palace is out of a job. With the Concord police force operating under the auspices of the U.S. Justice Department, Hank’s days of solving crimes are over…until a woman from his past begs for help finding her missing husband.

Brett Cavatone disappeared without a trace—an easy feat in a world with no phones, no cars, and no way to tell whether someone’s gone “bucket list” or just gone. With society falling to shambles, Hank pieces together what few clues he can, on a search that leads him from a college-campus-turned-anarchist-encampment to a crumbling coastal landscape where anti-immigrant militia fend off “impact zone” refugees.

1.) You MUST fill out the form below (if you’ve signed into Rafflecopter before, it will remember you!)
2.) Giveaway is for 1 copy of COUNTDOWN CITY by Ben H. Winters to 1 winner
3.) Giveaway is open to US residents
4.) You must enter on or before 7/8/13
5.) Please see my Giveaway Policy.