Beth Ciotta is the author of The Glorious Victorious Darcys series, and much more! Here 2nd book in the series, HIS CLOCKWORK CANARY, is out tomorrow, and Beth was kind enough to answer a few of my questions!

Please welcome Beth to the blog! 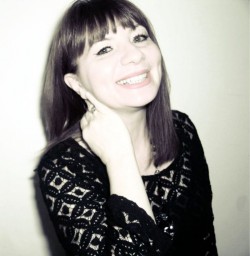 Beth, the 2nd book in The Glorious Victorious Darcys, His Clockwork Canary, is out this week! Will you tell us a bit about the series and His Clockwork Canary’s hero, Simon Darcy?
Absolutely, and thank so much for having me. The best way to describe The Glorious Victorious Darcys is to share a snippet from the Reader’s Letter that’s included in the front of HIS CLOCKWORK CANARY.
***
Imagine the 1960s. Race riots. Viet Nam. The Cuban Missile Crisis.
Imagine a group of fanatical peace activists happening upon a means of time travel and jumping back to the source of departure, the mid-1800s, in hopes of altering the future and avoiding specific global atrocities.
Imagine their good intentions going horribly wrong and, instead, the two centuries meld setting the world on an unknown course.

I imagined and ended up with a spectacular and endearing alternate era—The Victorian Age meets the Age of Aquarius.

That’s a pretty clear set up for the Darcy’s world. As for Simon Darcy, he’s related to Briscoe Darcy, the infamous Time Voyager who instigated the whole melding-of-centuries kerfuffle. Though an engineering genius, Simon’s notorious bad timing has contributed to his family’s hard times. In this story he’s intent on finding or rebuilding Briscoe’s time traveling engine in hopes of winning a global contest in order to restore his family’s good name and reputation.

Joining him on this adventure, his first love, Wilhelmina Goodenough. That’s when things really heat up. 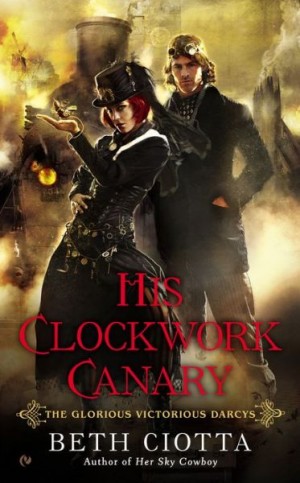 You wrote your first book when you were 10 and were singing professionally by the time you were 14! It’s obvious you were destined for a creative career! When you sold your first novel, how did you celebrate?
I sold my first novel in 2001—SCANDALOUS SPIRITS, a paranormal romance written with Cynthia Valero under the penname, CB Scott. It was a first sale for both of us. Honestly, I can’t remember how I celebrated. But I remember clearly how I felt when we were offered the contract, when I first held that story in my hands as a real ;book’, how I felt at our first booksigning…. It’s a once-in-a-life time thrill! Overwhelming and wonderful and impossible to properly describe. But it’s similar to the sensation of literally walking on air.

You wear many hats in your writing: paranormal, romance, and now steampunk! What do you enjoy most about writing steampunk, and what kind of research do you do for the Glorious Victorious Darcys series?
What I enjoy most about writing this steampunk series, which also incorporates paranormal and time-traveling elements, is that it’s a playground where my imagination runs wild. It’s an incredibly freeing experience to write in self-created, fantastical and unique world. Regarding research… Although The Glorious Victorious Darcys is fueled by my vivid imagination, it’s ground in certain realities. A good amount of time is invested in researching subjects (and assorted facts within) such as: Victorian, England, American Wild West, steam-powered engines, flying machines, weaponry (19th and 20th century), social and political aspects pertaining to the 1880s and the 1960s, time travel, countries and specific locations . . . The list goes on.

Without giving anything away, was there a favorite scene of yours in His Clockwork Canary?
That’s easy. It’s not a scene that I mapped out ahead of time. It just happened. And I remember I was upset as well as riveted when I wrote it. It’s a scene in which the heroine (a supernatural minority) is refused service in a restaurant because of her race. Although it takes place in the 1880s, it mirrors the intolerance and prejudice of the 1960s. That scene resonated with me on many levels. But what stayed with me most was the way Willie (the heroine) and her companions, one of them being the hero, Simon, handled the situation. 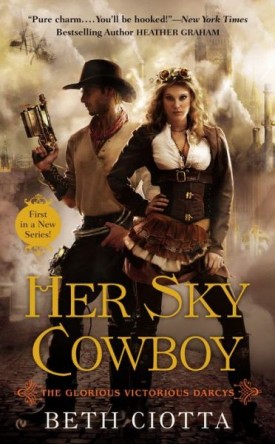 Who, or what, are some of the biggest influences on your writing?
I am in awe of so many artists, whether in film, literature, music, or art. I can’t say that I am specifically influenced by one. I think it’s a combination of influences that transform over time. I’ll just say my biggest creative influence is: The Arts.

How about a few favorite novels or authors?
I always feel awkward answering this question because, again, I admire so many authors. Hard to name just a few. Especially in the romance genre! How about if I share one favorite author from four different genres that I enjoy? Romance: Susan Elizabeth Phillips / Thriller: Harlan Coben / Fantasy: Jim Butcher / Women’s Fiction: Nora Roberts

If you could experience one book again for the very first time, which one would it be?
A Knight in Shining Armor by Jude Deveraux

What’s next for you?
It’s a busy year! I’m presently working on the third book in my contemporary series The Cupcake Lovers. ANYTHING BUT LOVE releases in October of this year. Also coming in the fall, a Cupcake Lovers Christmas novella, as well as a paranormal Christmas novella that’s included in an anthology spearheaded by the always amazing Heather Graham. Also in the works, the third steampunk novel in The Glorious Victorious Darcys. Never a dull moment!

About HIS CLOCKWORK CANARY:
For ambitious engineer Simon Darcy, winning Queen Victoria’s competition to recover lost inventions of historical significance is a matter of pride—and redemption. After all, it was Simon’s failed monorail project that left his family destitute, and winning the tournament would surely restore the Darcys’ reputation.

Simon sets his sights high, targeting no less than the infamous time-travel device that forever changed the world by transporting scientists, engineers, and artists from the twentieth century. The Mod technology was banned and supposedly destroyed, but Simon is sure he can re-create it.

His daring plan draws the attention of Willie G., the Clockwork Canary, London’s sensationalist reporter. Simon soon discovers that Willie is a male guise for Wilhemina Goodenough, the love of his youth, who left him jilted and bitter. He questions her motives even as he falls prey to her unique charm. As the attraction between the two reignites, Simon realizes that this vixen from his past has secrets that could be the key to his futureas long as he can put their history behind him.