Karina Cooper is the author of the awesome St. Croix Chronicles and the Dark Mission series, of which the finale, ONE FOR THE WICKED, just dropped! I’m letting her take over the blog today to talk about Love In a Time of Apocalypse!

**Also, I’ve got a SIGNED copy (courtesy of Karina) of ONE FOR THE WICKED to send out to one lucky winner, and all you’ve got to do is answer Karina’s question at the end of the post (US only)! 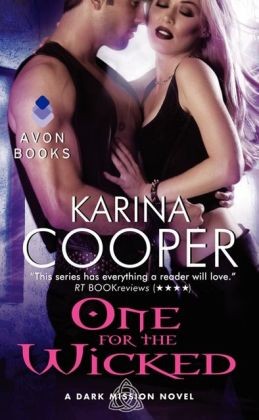 Love In a Time of Apocalypse by Karina Cooper
If you’ve been reading the Dark Mission series, you might have noticed a trend amidst all of my couples. From Silas’ self-directed anger, Naomi’s mindless enjoyment, Caleb’s raw aggression, Parker’s submission and, finally, Kayleigh and Shawn’s inevitable collision, every couple suffers from a frenetic energy that coats everything—love and lust, anger and energy.

Time is running out. This is true of nearly every post-apocalyptic scenario, especially in ones where that apocalypse is still all too raw, or looming again. One for the Wicked visits at a time when war menaces on the horizon—when blood coats the streets and the stench of the bodies they built New Seattle upon grows too thick to ignore.

The world demands soldiers—men and women ready to fight—but that doesn’t leave a lot of time to love. When one is carrying the burdens of a population—sins and otherwise—then how does one excuse the time to love? Or even the ability?

In Lure of the Wicked, Naomi was a soldier falling apart. She liked her “romance” completely without strings—hard and fast. Although Phin had no problems with this initially (well, duh), he eventually figured it out for the defensive shield it was. When he forced her to slow it down, take the time to really get to know him, she started forging bonds she couldn’t shake.

Caleb carries the world on his shoulders, and the things he’d done prior to All Things Wicked caused him to despise himself more than anyone else despised him—including the woman he loved. Unable to escape his feelings, the things he does to Juliet are not kind, all in the name of protecting her from him in a kind of backwards logic that was—as well know—doomed to fail.

Kayleigh Lauderdale digs rough men—she likes them rugged and lethal. Shawn Lowe fits that description, but that’s not all. With all the pressure to succeed, to please the only family she has left, she takes her pleasure where she can find it—dabbling in the dangerous waters of a street-ready man like Shawn. Getting close to Kayleigh was always his plan, but not like she wants it. He may be asking himself where the harm is in indulging her naïve interests, until he finds his will slipping.

The pressures of an apocalypse—of any sort of fight, conflict, or storm—may keep people from finding each other, but it can also crowbar opportunities in those last moments. Nobody likes to die alone.

***Answer the question below in the comments for a chance to win ONE FOR THE WICKED (US ONLY), and I’ll randomly choose a winner on 5/17!***

What are some of your favorite books featuring couples thrown together because of conflict—war, vengeance or apocalypse—and who somehow manage to fight through it to find love? 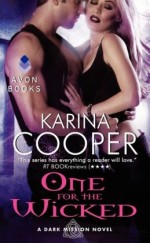 About ONE FOR THE WICKED:
Dr. Kayleigh Lauderdale possesses the only cure for what’s killing the city’s witches. Desperate to acquire it, the resistance sends their best agent, but Shawn Lowe has his own agenda and it doesn’t include saving anyone—least of all, the daughter of his sworn enemy. He has to ignore the blistering attraction he feels the instant they meet, because he can’t give in until he gets what he wants. He just never counted on wanting her . . .

Kayleigh can’t believe how out of control Shawn makes her feel. He lies to her with one breath and excites her beyond reason with the next. A reckless encounter could steal her heart, while the danger hovering over the city may prove too much for either of them to handle. When the world turns upside down, it will take everything Kayleigh and Shawn have to hold on . . . to life, to hope, to each other. 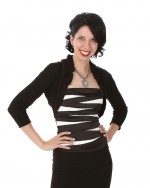 About Karina Cooper:
After writing happily ever afters for all of her friends in school, Karina Cooper eventually grew up (sort of), went to work in the real world (kind of), where she decided that making stuff up was way more fun (true!). She is the author of dark and sexy paranormal romances, steampunk adventures, crossover urban fantasy, and writes across multiple genres with mad glee. Tarnished, first in The St. Croix Chronicles, was the recipient of the RT Reviewer’s Choice Award for Best Steampunk Novel of 2012.

One part glamour, one part dork and all imagination, Karina is also a gamer, an airship captain’s wife, and a steampunk fashionista. She lives in the beautiful Pacific Northwest with a husband, a menagerie, and a severe coffee habit.