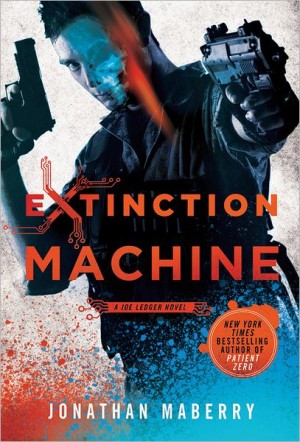 Exctinction Machine (Joe Ledger #5) by Jonathan Maberry (St. Martins Press, March 2013)-Captain Joe Ledger is on vacation. How long do you think that will last, given the nature of Joe’s job? Turns out, not very long at all. Per orders from Mr. Church, Joe and his DMS team are knocking on the door of Shelton Aeronautics in Wolf Trap, Virginia. Joe is hoping that this will be easy. In and out. Unfortunately, it’s the complete opposite. There’s been a massacre at Shelton Aeronautics, and the men they come in contact with are…different, and the hand held weapons they carry can cause major damage with just a click. That whole incident was enough to ruin Joe’s day, but when he finds out the president has gone missing, things all of a sudden take on a whole new, and terrifying dimension. Joe and the DMS team are eager to help, but the underhanded Vice President William Collins has stepped up to acting president, and he’s out to shut down Joe and the DMS in any way possible. Meanwhile, a video comes to light showing the president urging them to find something called the Majestic Black Book. The president going missing is only the latest in odd occurrences around the world, however, and when a prototype US stealth fighter is shot out of the sky at a demonstration (which should be impossible), it becomes increasingly clear that something may be at work that’s not of this world.

Extinction Machine is the fifth novel in the Joe Ledger series, and if you’ve been keeping up, you probably expect things like cool gadgets, spectacular fight scenes, government conspiracies, and since Joe has already dealt with vampires and zombies, it’s only fitting that aliens be on the menu too, yes? If you tend to groan when you see stuff about UFOs and aliens, never fear, Maberry handles this subject as he does all others, with exhaustive research and a very intelligent take that had me riveted. I adore Joe and his crew, and although I was delighted to see a little bit of sumthin’ sumthin’ between Joe and Violin (beautiful, intelligent, deadly), it’s immediately obvious that Joe is smitten when he meets Junie Flynn, a woman who podcasts, speaks, and writes about aliens and may have a direct line to the Majestic Black Book. Joe actually gets kind of sappy when it comes to Junie, and feels an immediate connection to her that may seem unlikely, but the man’s been through a lot. He deserves some happiness.

Now, this series is never limited to one villain, and Extinction Machine is no exception, but there’s one in particular, Erasmus Tull, that especially intrigued me. He has a background with Mr. Church and he may or may not be human, but one thing is for sure, he’s a killing machine, and his actions are shocking, but his desire to be like normal people, to discover that “missing” intangible thing that would make him less of a monster, is rather tragic, and he’s certainly one of the most compelling villains that Jonathan Maberry has introduced thus far.

Extinction Machine follows the same format as previous novels: short, action packed chapters, switching between Joe, Mr. Church, and various other players. I personally enjoy this because I can read snippets at a time and not feel like I’ve left myself hanging if I have to put the book down. Trust me, these books are the ones where you want to read “just one more chapter.” There’s a ton going on in Extinction Machine, as in the other novels, but I love that about this series. Maberry manages some pretty complex story lines while constantly engaging his readers, and the short chapter format serves the narrative perfectly and keeps a sense of urgency simmering right at the surface. It doesn’t hurt that it’s made very clear early on that a countdown is in effect, and there’s very limited time left before something catastrophic will happen.

Five books in, and I’m still hooked on Joe. Yes, Joe’s tough and you can almost smell the testosterone, but he’s got a heart as big as some of the conspiracies that the DMS deals with. There’s always a bit of self-doubt within him as he fights the killer within, and tries desperately not to fall so deeply into the dark, that he can’t return. He tirelessly fights the good fight, and if he can come back with his soul intact, so much the better.  I continue to thoroughly enjoy the over-the-top, relentlessly clever, roller coaster madness that is the Joe Ledger series, and I consider it the best kind of escapism. I’ll follow Joe anywhere!