Fantasy Interview: Liesel Schwarz, author of A Conspiracy of Alchemists

Interview: Liesel Schwarz, author of A Conspiracy of Alchemists

Liesel Schwarz’s brand new novel, A Conspiracy of Alchemists is out this week, and she was kind enough to answer a few of my questions. Please welcome Liesel to the blog! 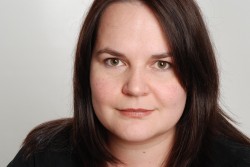 Liesel, will you tell us a bit about yourself and your background? Did you always want to be a writer?
I think I’ve always been a storyteller. I remember making up stories from a very young age. I have also been passionate about reading and so I think becoming a writer was inevitable.

Will you tell us a little bit about your new book, A Conspiracy of Alchemists and its heroine, Elle Chance?
ACOA is a steampunk adventure, set in the belle epoch. It is set in a word as was imagined by the 19th Century Gothic literature. Elle is a dirigible pilot who is hired to fly a mysterious charter from Paris one day and very quickly she finds herself in all kinds of interesting situations. 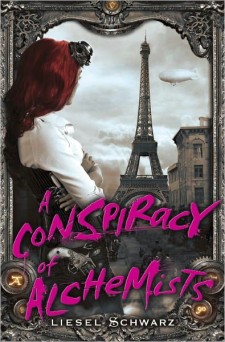 A Conspiracy of Alchemists definitely has steampunk elements in the mix. Why do you think steampunk has become so popular recently?
I think steampunk has always been immensely appealing. It just hasn’t necessarily had the exposure. All that has changed with fans promoting the genre online. I think it’s wonderful – the aesthetics of steampunk are so much fun.

What do you love most about writing fantasy?
The fact that you have the freedom to do whatever you want. I think that allowing yourself the freedom to invent new ideas and concepts is the epitome of creativity and I don’t think that there is any other genre that does this better than speculative fiction does.

What are a few of your favourite novels or authors? Is there any particular book or author that influenced you more
than others?
The list is too long to recount! As a writer, I read very widely and so it’s very difficult to pick a favourite favourite. I am a big fan of Charles Dickens. He really was a genius. I also read a lot of Michael Moorcock when I was younger.

If you could experience one book again for the very first time, which one would it be?
I know this might sound like a cliché, but The Lord of the Rings blew me away. I think it was one of the very first “grown up” books I fought my way through as a child and I remember being astonished at the intricacy of the work. 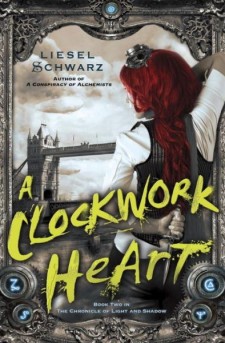 What book(s) are you reading now?
I am currently reading my friend Rebecca Alexander’s latest manuscript. One of the coolest things about being a writer is that you sometimes get to read new books before they come out. I can’t say too much more about it, but it’s a ghost story and it’s fabulous!

When you manage to find some free time, how do you like to spend it?
Free time? What’s that? Seriously though – I am more of a country mouse than a city mouse and so I like being outdoors, hiking or camping. I am also definitely a cat person.

What’s next for you?
Well, I’ve recently finished A CLOCKWORK HEART, the sequel to Alchemists and I am currently working on the third book in the series. I will also be at San Diego Comic Con in July which is hugely exciting.
Keep up with Liesel: Website | Twitter

About A CONSPIRACY OF ALCHEMISTS:
LEAVE IT TO CHANCE. Eleanor “Elle” Chance, that is—the intrepid heroine of this edgy new series that transforms elements of urban fantasy, historical adventure, and paranormal romance into pure storytelling gold.

In a Golden Age where spark reactors power the airways, and creatures of Light and Shadow walk openly among us, a deadly game of Alchemists and Warlocks has begun.

When an unusual cargo drags airship-pilot Elle Chance into the affairs of the mysterious Mr. Marsh, she must confront her destiny and do everything in her power to stop the Alchemists from unleashing a magical apocalypse.