Janet Edwards’s wonderful novel, Earth Girl, debuted in the US on March 5th from Pyr books and she was kind enough to answer a few of my questions about the novel, her influences, what she’s reading now, and more!

Please welcome Janet to the blog, and don’t forget to check out the giveaway details at the end of the post, because we have a copy of Earth Girl up for grabs to one lucky winner, courtesy of Pyr! 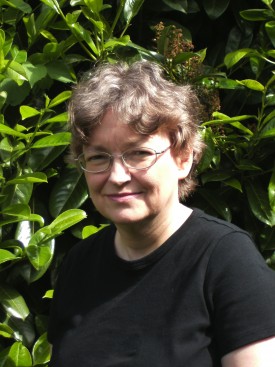 Janet, will you tell us a little about yourself and your background? Did you always want to be a writer?
As a child, I spent a lot of time reading, taking refuge from real life problems by escaping into the pages of a book. Although I dreamed up my own stories, and sometimes scribbled a little, becoming a writer myself seemed an impossible ambition.

As an adult, life was filled with work and family commitments. Eventually, something happened that meant I had some time available, and I decided to have a serious attempt at writing. The results were far more successful than I expected.

Will you tell us a bit about your new book, Earth Girl, and its heroine, Jarra?
Earth Girl is set at the end of the 28th century, in a future when only the handicapped live on Earth. ‘Normal’ people live on hundreds of colony worlds scattered across space, but one in a thousand are born with a faulty immune system that means they can only survive on Earth. 18-year-old Jarra is one of these, sent to Earth at birth to save her life, and abandoned by her parents to be raised as a ward of Hospital Earth. ‘Normal’ humanity regards her as a throwback and not entirely human, but Jarra has a plan to show them that an Earth Girl isn’t just as good as them, she can be better!

Did you do any specific research for the novel?
Everything about the 28th century society, and the state of the mostly abandoned future Earth, had to come from my own imagination, but it was based on the starting point of how Earth is now. That meant I was constantly checking minor details. I started with some knowledge of solar storms and solar arrays, but I did extra research on those. In most cases, hours of research resulted in only one line of the book, or even just reassured me that I didn’t need to mention something at all. 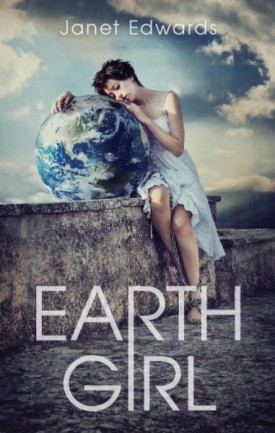 Why do you think Earth Girl will appeal to young adults and adults alike?
Earth Girl is in some ways a hero’s journey, with Jarra setting out into the world to prove herself and fight the dragon of injustice. The hero’s journey has always had universal appeal, and the strength of the world building is also appreciated by both young adults and adults. I’ve been delighted by the huge variety of people who’ve contacted me saying they enjoyed my book, male and female, ranging in age from 12 to a 75-year-old great-grandmother, and including those who’ve never read SF before as well as lifelong SF readers.

Why SF? What do you love most about the genre?
The joy of both SF and Fantasy is the freedom to explore all possible situations on an infinite variety of worlds. Your only limit is your imagination.

What are a few of your biggest literary influences?
I love the humour of Terry Pratchett, the breadth of his world building, and the strength of his characters, but I wouldn’t claim to write like him. Oddly enough, I think my writing has been most influenced by the SF books I read as a child. Not the ones I thought were wonderful, but the ones I found frustrating because their characters lacked depth and emotion. I feel that reading about events and societies in SF is like reading about those in history. What makes them become alive and real and interesting is the way they affect people.

If you could experience one book again for the very first time, which one would it be?
There are several. If I had to pick just one, then Dragonflight by Anne McCaffrey. It isn’t just about the book, but the person I was when I read it.

What book(s) are you reading now?
I’m currently reading the short stories nominated for the Nebula awards. Before that, I read Fair Coin by E C Myers, and Blood and Feathers by Lou Morgan, two wildly different books that I enjoyed. There was a third book as well, but I won’t give details of that one because neither the characters nor the science elements worked for me.

What would you like readers to take away from Earth Girl?
What a reader takes away from a book is a combination of the words on the pages and their own experiences. Hopefully, they’ll have thought a little about the problems of exclusion, disability, prejudice and grudges. On a lighter note, the Earth data net crash is a reminder of the importance of backing up your data properly. Failing to do so may cause a near total collapse of civilization, or at least the loss of your holiday photos!

What’s next for you?
Earth Girl is the first book in a trilogy, so I’m putting the finishing touches to the sequel, Earth Star, and working on book three.
Keep up with Janet: Website | Twitter

***GIVEAWAY DETAILS***
1. You MUST fill out the form below (if you’ve signed into Rafflecopter before, it will remember you!)
2. Giveaway is for 1 copy of EARTH GIRL by Janet Edwards to 1 winner.
3. Giveaway is open to US addresses only
4. You must enter on or before 3/20/13
5. Giveaway books courtesy of Pyr
6. Please see my Giveaway Policy.

About EARTH GIRL:
Just because she’s confined to the planet, doesn’t mean she can’t reach for the stars.

2788. Only the handicapped live on Earth. Eighteen-year-old Jarra is among the one in a thousand people born with an immune system that cannot survive on other planets. Sent to Earth at birth to save her life, she has been abandoned by her parents. She can’t travel to other worlds, but she can watch their vids, and she knows all the jokes they make. She’s an “ape,” a “throwback,” but this is one ape girl who won’t give in.

Jarra makes up a fake military background for herself and joins a class of norms who are on Earth for a year of practical history studies excavating the dangerous ruins of the old cities. She wants to see their faces when they find out they’ve been fooled into thinking an ape girl was a norm. She isn’t expecting to make friends with the enemy, to risk her life to save norms, or to fall in love.