Fantasy Between by Kerry Schafer

Between by Kerry Schafer 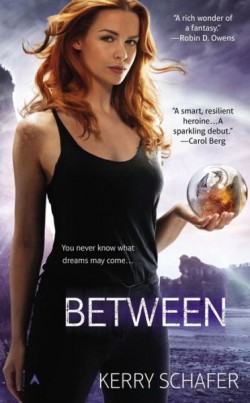 Between by Kerry Schafer (Ace, Jan. 2013)-Vivian Maylor is a doctor at Krebston Memorial, a small town hospital, and she’s been happy in her small apartment, away from her mother Isobel and her ex-boyfriend, Jared, who still pursues her. When a young man is brought in with a steadily rising temperature, it’s not immediately clear what’s going on, but when he actually spontaneously combusts, Vivian is stumped. After her shift, weary and confused, but unable to sleep, Vivian makes her way to the local bookstore that she’s always meant to visit since she moved to Krebston. A to Zee Books is a cozy little place and Vivian instantly feels at home, but when she meets the store’s proprietor, Zee, she’s instantly intrigued. It turns out that Vivian and Zee are connectedin ways Vivian would think impossible, but if she thought spontaneous combustion was odd, Vivian’s life is about to get even stranger.

All her life, Vivian has had the strangest dreams, and sometimes, she even dreams of things before they happen. Her mother, Isobel, is in a care home and is thought to be schizophrenic, but there’s more to her story. Eventually, Vivian learns that the Dreamworld is very real, and so is the Between, the world, appropriately, between the Dreamworld and the Wakeworld (what most people consider reality.) It’s the place that you go to when you’re not really awake and not really asleep. The Dreamworld is firmly in the realm of fantasy, with castles, fierce warriors,a tattered prince, and dragons. Lots of dragons. Dragons are revered, and if a human harms a dragon, even in self-defense, they face death as punishment. When Vivian’s grandfather dies, leaving her clues to her legacy, she travels into the Dreamworld, to a place called Surmise, to face down an evil queen, Jehenna, who may hold the key to Vivian’s past and her future.

When I started Between, I had no idea there would be such strong fantasy elements since the cover is pretty indicative of urban fantasy. That’s ok, though, because while it was unexpected, I rather enjoyed the time that Vivian spent in Surmise. Also, unlike most urban fantasy, Vivian isn’t particularly skilled in fighting, but she can wield a wicked stiletto if need be, and what she lacks in physicality, she makes up for in moxie. When she meets Zee in the beginning, we’re given the impression that romance is almost a certainty, since Zee has dreamed of Vivian all his life, and is already in love with her when they actually meet. However, we only get brief scenes with Zee while Vivian is in Dreamworld. There is a man in Dreamworld that looks like a scarred version of Wakeworld Zee and other characters seem to mirror people in Wakeworld, such as her ex-boyfriend, Jared. Jehenna is a convincingly nasty villain, but strangely enough, I would have liked to have gotten to know her a bit better. Then there are the dragons. Vivian is very closely entwined with the dragons, but the author leaves this revelation until the very end, although she does drop clues throughout the book.

Easily, though, one of my favorite parts of this book is Poe, a penguin that accompanies Vivian on her adventure. He’s her dream totem and even though he never speaks, he’s delightful. I didn’t connect with Vivian as much as I would have hoped, and as a reader, felt a bit at arms length amidst the set up of Dreamworld and the dragon mythos.  I really do like the concept of this series, however, and will look forward to seeing where the author takes it.  All in all, Between is a fun debut, with a unique premise, and leaves plenty of material to mine for future installments. I sense that this series has wonderful potential, if not simply because so much can be done with the worlds that Schafer has begun to build in Between. The writing is very assured for a first novel, and I also get the sense that Kerry Schafer has much more up her sleeve. If you like your urban fantasy shot through with a healthy dose of pure fantasy, give Vivian and Poe (and the dreamworlds within) a shot!