If you’re a crime/mystery buff, and especially a fan of mysteries set in the 30s, 40s, and 50s, you’re probably familiar with Max Allan Collins. His new book, Seduction of the Innocent, just came out,and he was kind enough to answer some of my questions!

Also, the wonderful folks at Titan are giving away a copy of the book, so be sure to check the instructions at the bottom of the post!

Please welcome Max to the blog! 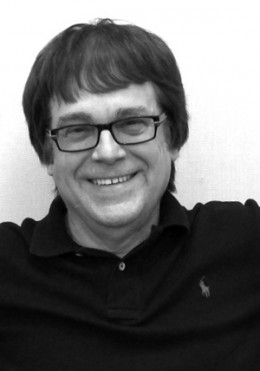 Max, your list of writing credits is long and illustrious! Did you always see yourself as a writer? Will you tell us a bit about your background and how you came to be a writer?
I grew up in Muscatine, Iowa, where I still live, a town of twenty-five thousand on the Mississippi River. I loved comic books as a kid, and I mean little kid, five, six, seven, eight, and I started drawing and wanting to be a cartoonist even before that. Somewhere there’s a home-made comic book my mother saved about two zombie Supermen in capes fighting in a jungle…still a decent plot…that I did before I could read or write. I just wrote gibberish in the speech balloons. Of course, a lot of people do that, anyway.

In the late fifties and early sixties, there was a private eye craze on TV. There had been a western craze, and this was the next new thing – shows like PETER GUNN, 77 SUNSET STRIP, but also PERRY MASON, PHILLIP MARLOWE, THE THIN MAN and MIKE HAMMER, which were based on mystery novels. I always was inclined to look at the source material of movies and TV shows that I liked, and this was no exception. I got hooked on writers like Erle Stanley Garnder, Raymond Chandler, Dashiell Hammett, and Mickey Spillane.

I was still trying to be a cartoonist in the seventh grade, but by the eighth grade my ambition had shifted over into being a writer, specifically a mystery writer. All through high school I wrote novel during the summer break and spent the next year sending the book out and getting it rejected. I did four novels like that. By college, despite no publications to speak of, I was writing at a professional level. Every novel I wrote in college, and there were four of those, has been published. Two were sold while I was still in college. So start young is the best writing advice I have.

It’s also good to have supportive parents. Mine allowed me not to get a summer job at a gas station or super market, like most of my friends, and let me stay home writing, keeping my five-buck allowance going through the summer months. The proviso was that I had to treat writing like a job and work at it every day. I still do. 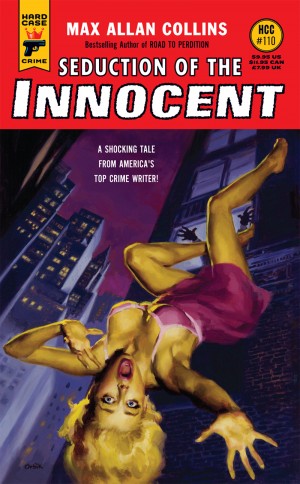 Your brand new novel, Seduction of the Innocent, is set in 1954 and is about comic books, censorship, and murder. Was there a particular inspiration for the novel?
As I very young kid, I knew about Dr. Frederick Wertham and his book, also titled SEDUCTION OF THE INNOCENT, and that comic books were under fire. The first real generation of comics fandom came out of those years, of growing up seeing comic books you loved either disappear or be censored into nothingness by the Comics Code Authority, the self-censorship group spawned by Wertham. All through the sixties and seventies and beyond, really, Wertham was the Boogie Man of comics. So that time period, and a Wertham-like anti-comics crusader as murder victim, seemed ideal.

Quite a few of your books are set in the 50s and have a distinct noir flavor. What do you love most about this time period?
Well, initially I wrote about the thirties and then it moved naturally into the forties and fifties. My most recent Nathan Heller novels, BYE BYE, BABY and TARGET LANCER – about Marilyn Monroe’s murder and the JFK assassination respectively – are set in the early sixties. It’s a natural progression.

On some level, I suppose I was fascinated by the decades that I had just missed – the very interesting if terrible years my parents had lived through, the Depression, World War Two. Television was young and TV was full of movies from those years, and I believe my generation got very interested in that period in that second-hand way. And of course a lot of the movie stars of the fifties and even sixties had begun their careers in the thirties and forties. So you might go to the movies and see Clark Gable as an older man at a matinee, and then watch him on a TV younger that night.

But another aspect was my desire to write private eye novels, and noir stories in general, and in the years when I began to publish – the early seventies – that kind of story just didn’t play. It was a time of hippies and free love and drugs and so on. Writing about a cop hero didn’t work for me, not in my era, where cops were guys hitting my friends over the head with nightsticks at the Chicago Democratic convention. So I looked to the past, to the time when Sam Spade and Phillip Marlowe were operating, to set my own stories. I could have that noir flavor, and I could visit a time that I had just missed.

You’re surely a big influence on many noir/mystery authors! What are some of your biggest literary influences?
I would like to think I’ve been an influence – certainly I was a pioneer in writing historically-based noir. My influences are the great writers of the genre, and there are a lot of them, so buckle up – Dashiell Hammett, Raymond Chandler, James M. Cain, W.R. Burnett, Horace McCoy, Mickey Spillane, Jim Thompson, Chester Himes, Agatha Christie, Erle Stanley Gardner, Rex Stout, and Donald E. Westlake. I missed a few, but that will have to do.

What would you like to see readers take away from Seduction of the Innocent?
First and foremost, a good time. It’s an odd book in that the subject is serious – the McCarthy Witch Hunt Era and its impact on comic books – but the approach is light-hearted. It’s very much an homage to Rex Stout’s Archie Goodwin/Nero Wolfe novels. The use of comic-strip art throughout, by Terry Beatty, is intended to invoke the period and suggest a general comics flavor, but mostly to say: please enjoy yourself.

What’s next for you?
Soon I’ll be doing my draft of the next book in the humorous mystery series that I write with my wife Barb, under the name “Barbara Allan.” It’s called ANTIQUES A GO GO. The next book that will be published in that series will be out in May – ANTIQUES CHOP. Very funny stuff, in my biased opinion. Then I’ll be doing the next Mike Hammer novel, working from a manuscript begun fifty years ago by the great Mickey Spillane – KING OF THE WEEDS. The new one of those, COMPLEX 90, will also be out in May.
Keep up with Max: Website
Crime Fiction Lover’s review of Seduction of the Innocent

**Wanna win a copy of Seduction of the Innocent? Here’s what you’ve gotta do (easy peasy)**

Find out more about the book and the tour at www.titanbooks.com/seductionoftheinnocent