It’s no secret that I loved Jamie Mason’s first novel, Three Graves Full (out Feb. 12th), so I was very excited when she agreed to chat with me about the book, her writing, and more!

We also have 2 copies of THREE GRAVES FULL up for grabs, so be sure to check out the details at the bottom of the post! 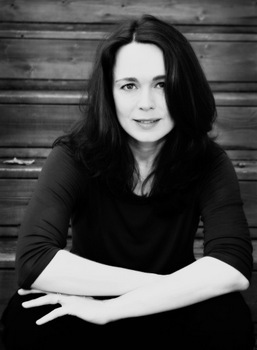 Jamie, will you tell us a bit about yourself and your background? Have you always wanted to be a writer?
When asked as a child what I wanted to be, I always told adults that I hoped to be a writer. Funny thing, though: I was lying. I knew that grownups were very impressed with writers, and I knew where my bread was buttered. I really liked the “Ooo-oooh!”

What I didn’t realize was that I was already doing it in my head – all the time. I was well into my twenties before I realized that everybody didn’t silently narrate everything they saw, everything they did, and every flitting thought they had. I remember being seven years old, walking to school, composing my internal ramblings in fully adjectived sentences, complete with narrative asides. I read a lot. I thought that’s what it sounded like in everyone’s head.

But it wasn’t until I was thirty-one years old that I was struck out of the blue with a full on idea for a novel. At the time, I thought I was crazy to try it. I’d never really written anything except really popular office memos.

As for the nuts and bolts, I grew up in the Washington DC area and now live in the mountains of Western North Carolina with my husband and two daughters.

Did anything in particular inspire you to write Three Graves Full?
I love that it’s time to tell this story. Three Graves Full had great kindling. It started with a tantrum over another story I was writing. It just wasn’t working. A writer friend, Graeme Cameron (you don’t know him, but you will,) suggested that I set it aside instead of gnashing my teeth out of my head. He offered an exercise in its place: to seek out a list of interesting headlines compiled from various newspapers.

I was under strict instructions not to read the articles. I had to pick one, then write a story that would result that headline.

The one I chose read: Landscapers Find Skull In Mulch Bed.

I still don’t know what real news story (and, presumably, tragedy) sparked the article, but what I was left with was Chapter One. 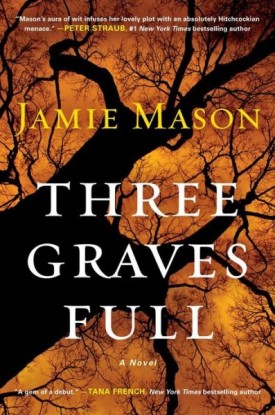 I think folks usually assume that the “main” character in a book is the author’s favorite. Which character in Three Graves Full was your favorite to write?
It’s hard to say. The villains, Gary Harris and Boyd Montgomery, were awfully fun to write, because they made so much sense. Really rotten sense, but sense nonetheless. Really though, I get to live a slice of an entirely different life (even a dog’s life) every time I write a character, so it’s one of the greediest, best parts of the job. No downsides there. All characters are, at the very least, interesting to write.

I personally fell in love with Detectives Tim Bayard and Ford Watts and Ford’s dog, Tessa. Will we see any of these characters in future novels?
I’m so happy you included Tim Bayard! I love that guy and I think he flew under the radar compared to some of the more, um, furry and frantic characters. At this time, I don’t have any plans to write another story with these three in it, but who knows? I’m not opposed to the idea, but it just hasn’t goosed me in the making-stuff-up center of my brain as yet.

What are some of your biggest literary influences?
I cringe at claiming influences for fear of inviting comparisons that I can’t live up to, but I’m more than happy to name some of the wonderful writers who make it a privilege to write, rewrite, scratch out, rebuild, and write it again. At my private altar all due deference is given, knowing they’re out there and that because they are, just any old words won’t do. My list is sort of all over the place and this is by no means comprehensive: Barbara Kingsolver, Stephen King, Tana French, Jeffrey Eugenides, Kazuo Ishiguro, Gregory Maguire, Neal Gaiman, Ian McEwan, Wally Lamb, Anita Diamant, George Orwell, Walter Wangerin, Jr., Michael Pollan, Jonah Lehrer, Terri Cheney, so many… There’s a guy I mentioned earlier, a British writer, Graeme Cameron – wait ‘til you get a load of his work.

What do you like to see in a good book?
Really great language and characters I believe.

Is there anything that will make you put a book aside, unfinished?
You know, I used to make myself read everything I started. And there can be value in that as a writer. It’s very important to know what you don’t want to do. Now I still occasionally do that, but mostly if the opposites of what I love about reading are ruling the page – utilitarian language and characters I don’t believe – then I usually move on. I have to admit, though, that it’s so subjective. Lots of people like things I don’t. That’s why they make all flavors. 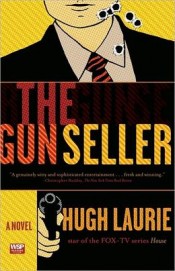 If you could experience one book again for the very first time, which one would it be?
Hugh Laurie’s (yes, that Hugh Laurie) THE GUN SELLER. Absolutely hilarious and excellent to the last paragraph. It’s the only book I’ve ever bought five times. I keep giving it away to someone I think has to have it. Then I always need a copy for my own shelf. I read the first six pages whenever I’m feeling blah. It’s an instant cure.

When you manage to find some free time, how do you like to spend it?
My two favorite things are a bit at odds. I love traveling and I love being at home. I love films, Formula1 racing, and football. And reading, of course. I’m also a big fan of going out to dinner. I own wilderness camping gear, but I need a lot of notice to psych myself up for that. Spur of the moment sushi? Awesome. “Hey, let’s walk for seven hours and sleep in the woods”? Yeah, best if you spring that on me about eight weeks in advance.

Is there any other news of upcoming projects or events that you’d like to share (or anything at all!)?
I am working on a new novel. It’s another suspense-type thing that I hope would sit comfortably on the shelf with THREE GRAVES FULL. This time, though, there’s a thread of the spy novel running through the goings on. Other than that, I’ve never done this before, so the events page on my website in filling up with stuff that I’m figuring out as I go along.
Keep up with Jamie: Website | Twitter

***GIVEAWAY DETAILS***
1. You MUST fill out the form below (if you’ve signed into Rafflecopter before, it will remember you!)
2. Giveaway is for 2 copies of THREE GRAVES FULL by Jamie Mason to 2 winners.
3. Giveaway is open to US addresses only
4. You must enter on or before 2/9/13
5. Giveaway books courtesy of Gallery Books
6. Please see my Giveaway Policy.

About THREE GRAVES FULL: Read Chapter One
There is very little peace for a man with a body buried in his backyard.

More than a year ago, mild-mannered Jason Getty killed a man he wished he’d never met. Then he planted the problem a little too close to home. But just as he’s learning to live with the undeniable reality of what he’s done, police unearth two bodies on his property—neither of which is the one Jason buried.

Jason races to stay ahead of the consequences of his crime, and while chaos reigns on his lawn, his sanity unravels, snagged on the agendas of a colorful cast of strangers. A jilted woman searches for her lost fiancé, a fringe dweller runs from a past that’s quickly gaining on him, and a couple of earnest local detectives piece clues together with the help of a volunteer police dog—all in the shadow of a dead man who had it coming. As the action unfolds, each character discovers that knowing more than one side of the story doesn’t necessarily rule out a deadly margin of error.