Betsy Dornbusch’s brand new fantasy, EXILE, came out in February from Night Shade Books and she was kind enough to allow herself to be interviewed for My Bookish Ways. Here, she talks about Exile, fantasy, sex (her blog is called Sex Scenes at Starbucks), and punk rock. Plus, she’s just plain cool, and funny, and…I kind of hate her (I mean that as a compliment, totally.)

So, won’t you welcome Betsy to the blog? 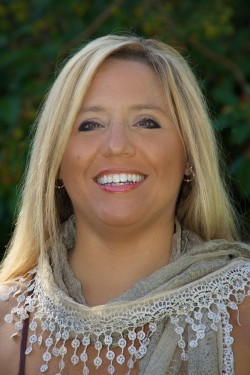 Your brand new fantasy novel, Exile, just came out last month from Night Shade Books! What would be your elevator pitch for the book.
Heh, it changes every time I’m asked this because I’m too lazy to go see what I’ve written before.

When Draken is exiled to an enemy kingdom for the murder of his beloved wife, even the gods can’t stop him seeking revenge against her real killer.

What did you love most about writing Exile?
Draken! And watching him balance his honor and bitterness. He’s basically a good guy, has always tried to do the right thing in a tough life as a bi-racial guy in a very prejudiced world, but he has to set aside that decency and honor when he’s exiled and decides on revenge. I’m a plotter, but he still manages to surprise me, even after years of writing him.

Really, though, I love all epic fantasy. It’s so visceral and gritty, at least the way I write it. When you fight with any kind of blade, things are close and dirty. A medieval-esque (or prior, or post-apocalyptic, post-oil/power, etc) world, and by that I mean any world where technology is limited to the mechanical and by the strength of actual manpower, doesn’t allow for physical or emotional distance. I always imagine emotions are constantly raw without the luxuries we have in the first world; characters can’t even escape the damned weather. Have you spent a cold weekend in a cloak, sleeping on the ground, drinking wine instead of water at breakfast? I have. Tempers run high, even when it’s for fun.

But mostly I like developing the characters themselves, the different cultures and different races. In real life we try so hard to make people seem different when really we’re quite alike. In fantasy I get to build peoples and cultures that really are different. It’s fun to toss them together and make them play nice. 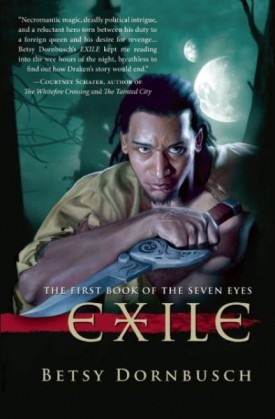 In addition to fantasy, you also dabble in thrillers, scifi, and erotica! Is it tough to wear so many hats in your writing?
Not too tough. For me it’s all about the story, and if the story is about demons or a crusade or an unlikely couple who have to navigate an intergalactic rebellion together, well, it just is. A few times I’ve shifted out of my regular fantasy genre for the challenge: it was definitely the case with erotica. Once I got over the cringe-factor, I found I really liked it. Also, I went in mistakenly thinking the bar was lowered, which felt like a relief at first. (The bar isn’t lowered; erotica has some fabulous writers and stories!)

But Fantasy and Science Fiction has a contingent of readers and writers who expect “theme and message and commentary” from their genre books. Not that these expectations are wrong in any way, and I like cool themes as much as the next reader, but I got to a point where I found that attitude really intimidating. It hampered my creativity. I’m very dedicated to story and letting readers take what they will from my work, so erotica helped me stretch creatively, take risks, and then carry that risk-taking back to my SFF.

Sex also is a great device to show emotion. I’ve written enough sex scenes now that it feels weird to leave it behind closed doors.

What’s one of you favorite books of all time?
Ooo, I got this one! The Outsiders! It still informs my work today—the makeshift family of the gang, the underdogs of society, the brotherhood, the prejudice based on circumstance of birth, and the violence that results. The first novel I wrote at 13 was a riff on The Outsiders. Sometimes I wonder if everything I write is a riff on The Outsiders…

Incidentally, the first author I ever met was S.E. Hinton. She came to my school in fourth grade right about the time

I started writing stories. PLUS my fourth grade teacher just bought my book and posted a picture of himself with it. How cool is that? Fourth grade was a big year…

Quick! What’s something that makes you laugh out loud?
My family, every day. And Crabby Cat memes.

Sooo, in your free time you like to go to punk rock concerts…what’s your favorite band?
Only one? No way. Right now I’m listening to Sum 41, Green Day (which some people argue isn’t punk enough, whatever…), Dropkick Murphys, Blink 182, Rise Against, My Chemical Romance, the Indulgers—a local Irish rock band with a punk drummer, and the usual older bands… I’m always searching out music with a true, fun punk sound. I’m also branching out into some folkish sounds, and I’ve always loved metal… But I’ll stop now.

Is there anything else you’d like to share with us about upcoming projects or events (favorite adult beverage…something that no one else knows about you…), or anything at all?
It’s fairly well known I like Bushmills and about any kind of beer.

I’ve got several projects lined up for this year. I just passed the 100K mark on Emissary, the sequel to Exile, next up is a space opera based on my novella Lost Prince, and I’m revising another book to give to my agent—a still seekrit project I’m pretty excited about. In March I’ll be back on the appearance bandwagon: signings in CO and KS, and then launching into cons again with Starfest and Comic Con, both in Denver. Yes, I’m freaking out—the year is already flying by! And I always like to mention Electric Spec, which is an ezine I edit with two partners. We have an new issue coming out at the end of the month. http://electricspec.com
Thanks for having me!!
Keep up with Betsy: Website | Twitter 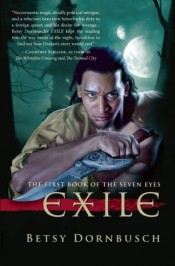 Draken vae Khellian, bastard cousin of the Monoean King, had risen far from his ignominious origins, becoming both a Bowrank Commander and a member of the Crown’s Black Guard. But when he is falsely condemned for the grisly murder of his beloved wife, he is banished from the kingdom and cast upon the distant shore of Akrasia, at the arse-end of the world.

Compared to civilized Monoea, Akrasia is a forbidding land of Moonlings, magic, and restless spirits. It is also a realm on the brink of a bloody revolution, as a sinister conspiracy plots against Akrasia’s embattled young queen–and malevolent banes possess the bodies of the living.

Consumed by grief, and branded a murderer, Draken lives only to clear his name and avenge his wife’s murder. But the fates may have bigger plans for him. Alone in a strange land, he soon finds himself sharing the bed of an enigmatic necromancer and a half-breed servant girl, while pressed into the service of a foreign queen whose life and land may well depend on the divided loyalties of an exiled warrior . . .

Exile is the beginning of an ambitious fantasy saga by an acclaimed new author.