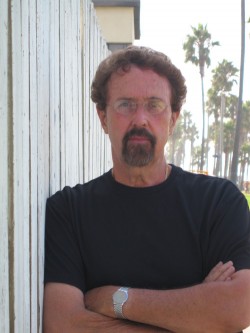 It’s been a pretty awesome year for suspense writer Timothy Hallinan, for more reasons than one. The man has written over 10 novels and has been nominated for both the Macavity and Edgar awards. His first book in the Junior Bender series, Crashed, just came out, and not only was Timothy kind enough to answer a few of my questions (and make me want to travel to Asia-like, now), but we’ve got a copy of Crashed up for grabs, so be sure to see the details at the bottom of the post!

Please welcome Timothy to the blog!

Tim, you’ve had a super busy year! You moved to Soho for your latest Poke Rafferty book, The Fear Artist, and the first novel in the Junior Bender series, Crashed, just came out! Will you tell us a bit about your “burglar with a magic touch” Junior Bender and Crashed?
Like most thriller writers, I have a soft spot for crooks. Characters who invent their moral code on the fly have a certain energy that threatens to hijack the books in which they appear. So I decided to write a series in which pretty much everyone is a crook. Junior is a normal, everyday, middle-class guy, unhappily divorced and deeply in love with his thirteen-year-old daughter, except that he’s a burglar. He’s 37 now and he’s been a burglar since he was 15 without ever getting caught, so he’s obviously good at it. He’s also usually the smartest guy in the room, and he gains a reputation as a sort of private eye who solves crimes for crooks. When a crook has a crime committed against him or her, going to the cops is often not an option, which leaves Junior. The books are, I think, pretty funny, but not at the expense of the mystery. These aren’t cozies; people get killed and the stakes are high. I think of them as Monty Python Noir, and I’m delighted that Soho bought them and is publishing the first three in a more-or-less unprecedented eight-month period. 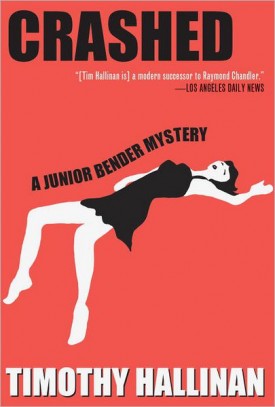 Have you always wanted to write? Will you tell us about your journey to crime writer extraordinaire?
I’ve wanted to write ever since I read Gone With the Wind at eleven years old and realized it was possible to make up a story that was more interesting than real life. And then, in eighth grade, I fell in love with my English teacher, Miss Reid, who must have been all of 22 years old and was, I realized even then, excessively fine. I wrote her a love poem, and she handled it with extraordinary delicacy, giving it a very positive literary critique and telling me I had talent. God bless her. So I grew up and joined a band and wrote songs and then got a real job, and started to write at night. My third book got me a three-book contract, which turned into a six-book series about an overeducated Los Angeles PI named Simeon Grist. When the Simeons sank beneath the weight of almost total public indifference, I took a few years off to make money so I’d never have to do anything but write. Then I wrote the first Poke Rafferty, A Nail Through the Heart, and four years later, the first Junior Bender, Crashed. I put Crashed up as an ebook because the company to which I was under contract, HarperCollins, didn’t want it, and then three years later the whole series got bought for hardcover and paperback by Soho and for film by Lionsgate and for audio by Blackstone. So I’m a multi-media king, although I’m a multi-media king who doesn’t sell many books.

What do you love most about writing suspense and crime?
I love writing, period, unless it’s not going well, when I ask myself what in the world I’m doing with my life. I write crime because I’ve read so much of it that I think I understand the conventions involved, even if I don’t always adhere to them. Crime and suspense novels, despite the darkness they sometimes describe, are ultimately optimistic, in that they deal with the restoration of order and some kind of reckoning for wrong that’s been done. Essentially, a crime novel presents a world that’s out of balance and then, over the course of the story, brings the universe back into moral alignment. More or less, anyway. 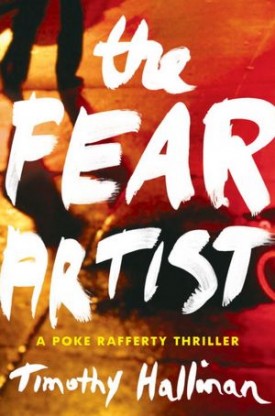 What are some of your biggest literary influences?
Hammett and Chandler essentially invented the modern, non-cozy mystery and took it an amazing level, and anyone who writes such books is just trying—seventy, eighty years later—to keep up. Aside from those two, and many who followed in their footsteps, my favorite writers aren’t usually crime writers, and I can’t claim that they influence me. I love Haruki Murakami, David Mitchell, Edith Wharton, Banana Yoshimoto, Anthony Trollope, William Gaddis, on and on. These writers dazzle me, but it would be presumptuous for me to say they influence me.

What are you reading now?
Just finished Right Ho, Jeeves, by P.G. Wodehouse, the master of the first-person narrative. Bertie Wooster, the harebrained twit who tells the Jeeves stories is absolutely consistent, totally confident, and unerringly wrong. I hadn’t realized until I read this—the first Wodehouse I’ve read in years—how much he affected Junior Bender, especially in his realization that so much of first-person narrative is rhythm. We all pay attention to rhythm when we write dialogue, but first-person narrative is essentially an extended monologue, and for it to feel like there’s a real person behind it, rhythm is essential. It’s so much of what makes a voice individual instead of generic. I also just finished Creole Belle by the Faulkner of crime fiction, James Lee Burke, The End of Everything by the prodigious Megan Abbott, and Killer Instinct, the first Charlie Fox novel, by Zoe Sharp. I’d read a couple of the others in the series and loved them, and then went back to the first. Charlie (short for Charlotte) is a former special forces op who absolutely kicks butt, and does it convincingly on every level. I think Zoe’s overdue for the best-seller lists.

Your Poke Rafferty series is based in Bangkok and it says in your bio that you’ve spent lots of time in Southeast Asia. What led you to travel there for the first time? What are a few things you love most about Asia?
I first went to Thailand more or less by accident; I’d been working on a PBS series in Japan. I was going to spend a few weeks there, but it was the coldest February in years, and I don’t do cold very well. My travel agent looked at warm Asian countries that didn’t require a visa and chose Thailand. I fell in love with it on first sight, just as Poke does in the books. What I love about Thailand, specifically, is that it is home to the most cheerful, best-tempered people in the world. (Seriously—if you want to get a laugh, tell your joke in Thailand.) They call it the land of smiles for a reason. But I’m also in love with the history, the ruins, the whole ancient-temple-by-the-sea thing. 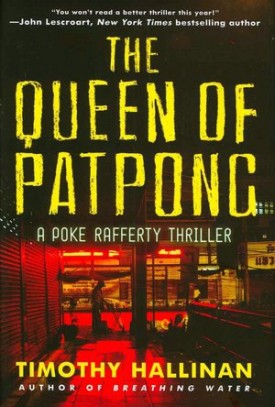 What do you think is one of the most common misconceptions that Americans have about Asia and its people and vice-versa?
Asia is much more varied than some people realize. The Philippines has nothing much in common with Korea, China is completely different from Indonesia (hell, Southern China is completely different from Northern China), and Japan isn’t like anywhere else in the world. Four of the world’s great religions are there – Buddhism, Hinduism, Taoism, and Islam—and the cultural differences from place to place are enormous.

I think the biggest misconception about Americans are that we’re all rich, we all love hip-hop, and our cities are 24-hour death zones. I’ve had Thai people who have, perhaps, watched too many movies, ask me if I’m not terrified to live in Los Angeles.

When you manage to find some free time, how do you like to spend it (besides traveling, of course!)?
I’m boring beyond belief. I love my wife and can happily just sit around with her doing nothing until she flees the room screaming, and I read. And read. And read. Once in a while I jog. But (with the exception of my wife) what I love most is writing.

What’s next for you?
Oh, Lord. I have to finish the sixth Poke Rafferty book, For the Dead. The second Junior, Little Elvises, comes out in January and the third, The Fame Thief, will be published in June, and I’ll be touring for that. And I have to write the fourth Junior, King Maybe, and finish revising the seventh Simeon Grist (the first Simeon since 1996), Pulped. And then there’s, you know, life.

***GIVEAWAY DETAILS***
1. You MUST fill out the form below
2. Giveaway is for 1 copy of Crashed by Timothy Hallinan to to 1 winner.
3. Giveaway is open to US addresses only
4. Must include a valid email address with your entry (no need to leave it in the comments, just include it when you fill out the rafflecopter form)
5. You must enter on or before 11/30/12
6. Giveaway book courtesy of Soho Press
7. Please see my Giveaway Policy. 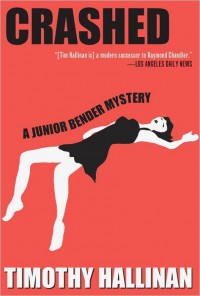 About CRASHED:
INTRODUCING JUNIOR BENDER, THE FAVORITE BURGLAR-TURNED-
PRIVATE INVESTIGATOR OF HOLLYWOOD CROOKS
Junior Bender is a Los Angeles burglar with a magic touch. Since he first started breaking into houses when he was fourteen years old, he’s never once been caught. But now, after twenty-two years of an exemplary career, Junior has been blackmailed by Trey Annunziato, one of the most powerful crime bosses in LA, into acting as a private investigator on the set of Trey’s porn movie venture, which someone keeps sabotaging. The star Trey has lined up to do all that’s unwholesome on camera is Thistle Downing, America’s beloved child star, who now lives alone in a drug-induced stupor, destitute and uninsurable. Her starring role will be the scandalous fall-from-grace gossip of rubber-neckers across the country. No wonder Trey needs help keeping the production on track.Junior knows what that he should do—get Thistle out and find her help—but doing the right thing will land him on the wrong side of LA’s scariest mob boss. With the help of his precocious twelve-year-old daughter, Rina, and his criminal sidekick, Louie the Lost (an ex-getaway driver), Junior has to figure out a miracle solution.