Derek Haas is the author of The Assassin Trilogy (The Silver Bear, Columbus, Dark Men) and his newest thriller, The Right Hand, just came out. He was kind enough to answer a few of my questions, so please welcome him to the blog! 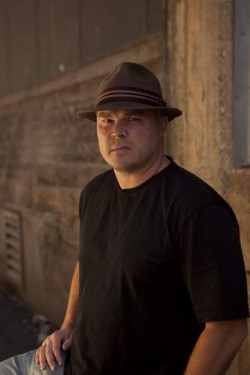 Derek, your newest thriller, The Right Hand, just came out! Will you tell us a bit about it and its hero, Austin Clay?
Clay is the field officer the CIA sends in on missions so black, they’ll deny any knowledge of his methods or existence. He’s a bit of an anti-Bond… he doesn’t rely on gadgets or sophisticated technology. He survives by careful planning coupled with quick-witted improvisation. He has his own code, which may or may not line up with his Agency’s.

Are you planning to write any more books featuring Austin Clay?
I am. I’m going to try to write a book where Clay meets up with Columbus, a character I wrote about in three previous books. I think they’re going to hate each other, which will make for some good prose.

What kind of research did you do for The Right Hand?
While doing research for a movie, I was fortunate enough to talk to some former CIA officers, which spawned the idea for this book. As I got into writing the book, I did a combination of traveling, googling, reading everything I could get my hands on, and talking to people who had lived in Russia, where half of the book is set.

As well as being a novelist, you’re also a screenwriter. Which one came first, and have you always wanted to write?
After grad school, I tried to write a novel, but failed miserably. I spent a few years working in advertising, and then broke through when my screenwriting partner and I sold our first script in 1999. We’ve been lucky enough to have a few movies produced since then. My first book was published in 2008, so I came to novels later. I did always want to be a writer. I asked my parents for a typewriter when I was twelve. I’ve been hitting the keys ever since. 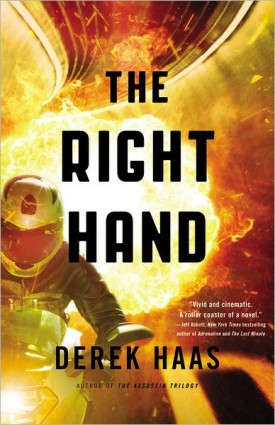 Have thrillers always been your genre of choice? What are some of your biggest literary influences?
I do love thrillers, and always wanted to write fast-paced, page turning novels. My biggest influences are Stephen King for storytelling, Ernest Hemmingway for economy of words, Somerset Maugham for character development, and Michael Connelly for pace. I could go on and on. I’m in a constant state of being influenced.

What are you reading right now?
I’ve been reading this Neal Stephenson book REAMDE for something around two months. I love it, but damn is it looooooong.

If you could read one book again for the very first time, which one would it be?
FOR WHOM THE BELL TOLLS… the greatest war novel of all time. Robert Jordan and that bridge… fantastic book.

Since you’re a screenwriter, I have to ask…seen any good movies lately? Any recent standouts?
Two in a row. LOOPER is a wonderful science fiction movie… smart and ambitious. FLIGHT is as well-written a character study as one can find in theaters these days.

Will you tell us about popcornfiction.com?
I started a website a few years ago that promotes genre short fiction. I’ve been lucky enough to publish amazing screenwriters, literary giants, and brand-spanking-new first-timers on there. Check it out!

I imagine you’re a pretty busy guy, so when you do carve out some free time, how do you like to spend it?
Number one, with my family. My wife is hilarious, and I have two boys, 7 and 5, who stun me with their imaginations and creativity. If I’m not with them, and I’m not writing, then I’m probably playing golf.

Is there anything else you’d like to share about upcoming projects and events (or anything at all!)?
I’m delighted that the rights for THE RIGHT HAND were snapped up by Universal Pictures and Scott Stuber. Michael and I are going to write the screenplay… I can’t wait to see what he does to screw up my book. Thanks so much for the interview!
Keep up with Derek: Website | Twitter

There has always been a need in the spy game for operations outside the realm of legality-covert missions so black no one in the American government, and almost no one in intelligence itself, is aware of their existence. The left hand can’t know what the right hand is doing.

Austin Clay is that right hand, executing missions that would be disavowed by his own government were he ever to be compromised. His team consists of only his trusted handler and himself. His missions are among the most important and dangerous in U.S. history.

Clay is sent to track down a missing American operative, a man who was captured outside of Moscow, in the Russian countryside. Soon he discovers the missing officer is only the beginning of the mission, and finds himself protecting a desperate woman who believes a mole has penetrated the top levels of the U.S. government, throwing the international balance of power into jeopardy.