Scare-a-Thon Top 5 (Books and Films!): Stephen Blackmoore, author of City of the Lost

I’m so thrilled that Stephen Blackmoore was game to do a Top 5 for me for the Scare-a-Thon event, ’cause his novel, City of the Lost, has been one of my faves of 2012, and I knew he’d have some great suggestions (he does.) So, without further ado, here’s his list of Top 5 books and films to get you in the mood for Halloween. 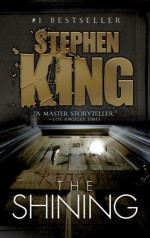 THE SHINING – Stephen King
I’m not a huge fan of the movie adaptation of the book. It’s okay and it’s creepy, but it feels sanitized to me. It’s not Stephen King’s story brought to the big screen. It’s all mental, it’s all Kubrick. Don’t get me wrong, I enjoyed it, but the book is messy, visceral. The gore in the film is too stylized, almost metaphorical. The book has a weight to the prose that hangs onto you afterward. Take the scene with the dead woman in Room 217. It’s a lot more affecting in the novel.

PET SEMATARY – Stephen King
Like with The Shining, I prefer the book version of Pet Sematary. The movie was fun, but the only thing I really remember about that is the creepy kid running around with a scalpel and Fred Gwynne talking in his best New England accent. I always conflate him and the guy who did the Pepperidge Farms commercials so now every time I see the cookies at the grocery store I always hear “Pepperidge Farms. Sometimes dead is bettah.” 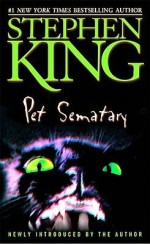 BOOKS OF BLOOD – Clive Barker
This collection is loaded with great short stories. It was the first I’d read of Barker and I still get a kick out of it. All of them imaginative, all of them incredibly twisted. My favorites are DREAD; SEX, DEATH AND STARSHINE and THE MIDNIGHT MEAT TRAIN. Oddly, I still haven’t seen the film adaptation of that last. I hear it’s pretty good.

ON THE FAR SIDE OF THE CADILLAC DESERT WITH DEAD FOLKS – Joe Lansdale
I’m not sure this is a horror story so much as it’s, well, a Lansdale story. It’s a post-apocalyptic, zombie western. Sort of. Here, let me give you a sample:

“After a month’s chase, Wayne caught up with Calhoun one night at a little honky-tonk called Rosalita’s. It wasn’t that Calhoun had finally gotten careless, it was just that he wasn’t worried. He’d killed four bounty hunters so far, and Wayne knew a fifth didn’t concern him.

The last bounty hunter had been the famous Pink Lady McGuire–one mean mama–three hundred pounds of rolling, ugly meat that carried a twelve-gauge Remington pump and a bad attitude. Story was, Calhoun jumped her from behind, cut her throat, and as a joke, fucked her before she bled to death. This not only proved to Wayne that Calhoun was a dangerous sonofabitch, it also proved he had bad taste.”

And if that’s grabbed your attention, check out the rest of the novella here. http://web.archive.org/web/20020803155914/http://joerlansdale.com/stories.shtml 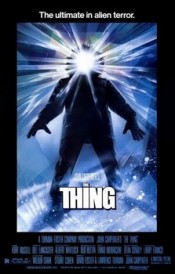 THE THING – John Carpenter
This may very well be my favorite film ever. Spoilers ahead in case you haven’t seen it, which if you haven’t you really need to fix. It’s a masterwork in paranoia. Aside from it being truly gross and creepy with effects by Rob Bottin, it’s so well constructed that every time you try to figure out who the monster is you’ll come up with something new. Case in point, this analysis of the film by Rob Ager that delves into the seemingly simple question, “Was Childs infected?” http://www.youtube.com/watch?v=SppG-I_Dhxw

If you’ve seen the original film, THE THING FROM ANOTHER WORLD (1950), you’ll notice a few differences. Like, oh, all the science. In that one the monster is a giant, walking carrot played by James Arness before he made it big on Gunsmoke. It’s horrible. Apparently, playing up paranoia and trying to get across the idea of a creature that absorbs a person and takes their place was just too much to explain to a 1950 movie-going audience. Pity. Could have beaten Invasion of The Body Snatchers by a good six years.

This is not the case with the novella that both films are based on, John W. Campbell’s WHO GOES THERE? The 1982 film much more closely follows the story than the 1950 version. There is no giant, blood-sucking space carrot. Thank god. Instead there is a slow, inexorable dread as you realize that you don’t know who the monster is, who’s infected and what it’s going to do next.

I refuse to acknowledge that the 2011 version of the film exists. We shall speak of it no more.

However, I will give a shout out to this recent re-imagining of the 1982 story from the point of view of the beast, THE THINGS by Peter Watts. It’s not scary, but in a lot of ways, it’s very sad. http://clarkesworldmagazine.com/watts_01_10/
Keep up with Stephen: Website | Twitter 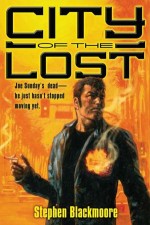 About City of the Lost:
Joe Sunday has been a Los Angeles low-life for years, but his life gets a whole lot lower when he is killed by the rival of his crime boss-only to return as a zombie. His only hope is to find and steal a talisman that he learns can grant immortality. But, unfortunately for Joe, every other undead thug and crime boss in Los Angeles is looking for the same thing.
Read my review
Purchase: Amazon | B&N | Indiebound

About Dead Things (forthcoming):
Necromancer is such an ugly word, but it’s a title Eric Carter is stuck with. 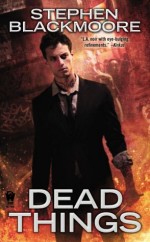 He sees ghosts, talks to the dead. He’s turned it into a lucrative career putting troublesome spirits to rest, sometimes taking on even more dangerous things. For a fee, of course.
When he left L.A. fifteen years ago he thought he’d never go back. Too many bad memories. Too many people trying to kill him.

But now his sister’s been brutally murdered and Carter wants to find out why.
Was it the gangster looking to settle a score? The ghost of a mage he killed the night he left town? Maybe it’s the patron saint of violent death herself, Santa Muerte, who’s taken an unusually keen interest in him.

Carter’s going to find out who did it and he’s going to make them pay.
As long as they don’t kill him first.
Pre-order: Amazon | B&N | Indiebound