Portlandtown, the brand new book by Rob DeBorde, comes out tomorrow, and the author was kind enough to answer a few of my questions (and give us his recipe for Beer-Steamed Mussels), so please welcome Rob to the blog! 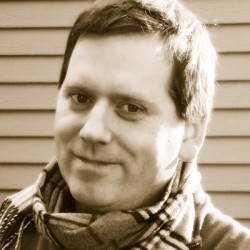 Rob, your shiny new book, Portlandtown: A Tale of the Oregon Wyldes, is out tomorrow!!! The premise is pretty awesome and includes outlaws, zombies, and booksellers in the 1800s. Will you tell us a little bit more about it? Teasers always welcome!
I’d be happy to share! Portlandtown tells the story of the Wyldes, a curiously talented family living in Portland in 1887 who face off against an undead outlaw and his horde of living-challenged brethren. That’s studio pitch. For the reader I’d also offer this: it’s not just about zombies. Yes, more than a few slack-jaws stumble their way through the pages of Portlandtown, but the book is as much about the adventure as it is the horror. Plus there are voodoo cowboys, steam-driven totem poles, and a tent-full of Old West circus freaks. Yes, I just promised you oddities versus zombies. Step right up!

Your first book, Fish On A First Name Basis, was a nonfiction guide to catchin’ the swimmy critters, skinnin’ em, and cookin’ em up. What made you decide to embark on writing a supernatural novel?
Actually, the supernatural side of things was always more my style. I found my way to the Food Network, and later the fish book, by way of an animated cooking show I developed online (I’ll explain later). Prior to that I was writing stories about talking skeletons and time-traveling monsters. Thus, a book about outlaws and zombies is simply a return to form. Also I got tired writing about fish. Seriously, there’s only so many ways to cook a flounder. 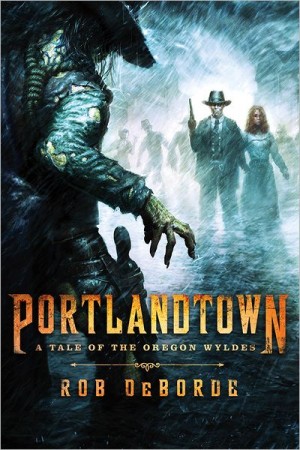 Why do you think zombies are so popular all of a sudden (other than for their good looks)?
I think the real question is why are zombies still popular after almost a decade of high-profile pop culture exposure. Most “monsters-of-the-week” fade after a few seasons, but not zombies. You can’t kill ’em! I suppose the answer—to both questions—probably has something to do with zombies being the perfect analog for our own mortality. You can run, you can hide, you can take vitamins every day of your life, but eventually death is going to catch up with you…and eat your brains. That’s the Psyche 101 answer, anyway. Could be we just dig zombies because they’re dangerous and funny at the same time. Die laughing—what a way to go, eh?

How about books in general? What are some of your favorite authors or novels?
Stephen King, Warren Ellis, Jim Butcher, Sarah Vowell, Garth Ennis—to name just a few. As for novels, I don’t even know where to being. Actually, I do: It. That’s the first time a book gave me chills. Twice! I’ve read a lot of great books since, but I’ll mention just a few for readers to seek out: King’s 11/22/63, Christopher Moore’s Lamb, The Mystic Arts of Erasing All Signs of Death by Charlie Huston, Ellis’s Transmetropolitan, and Ennis’s Preacher. (Yes, the last two are comic books. It’s my list. Leave me alone.) And if you haven’t read Ernest Cline’s Ready Player One, you should—especially if you grew up anywhere near the 1980s. It’s a blast.

If you could read one book again for the very first time, which one would it be?
Besides It? Harry Potter. I’d like to erase all knowledge of the stories, hype, movies—especially the movies—and start on page 1 not knowing a thing. That would be a joy.

I hear you have an online cooking show? Care to, um, dish?
That would be Deep Fried, Live! With Tako the Octopus, an animated cooking show starring an accident prone eight-legged chef. It’s a real cooking show, with recipes and food science and explosions. I think there’s even a few zombie clams on the menu in one episode. Fun stuff. Also the reason why I ended up in the food business. Apparently, Alton Brown got tired of people asking if he was behind the show so he asked me to write for him, which I did for five years. Tako is still kicking around, although I’m not producing new shows at the moment. If you’re curious the whole series is still available at www.8legged.com. There are also a few shows on YouTube (for those who aren’t on a Flash-enabled device).

Speaking of dishes…what’s one of your favorites?
I only get one? Hmmm…okay, mussels and beer. That’s not a cheat, by the way. I’m cooking the mussels in the beer, so any unused brew gets put the table. Be sure to get a bomber (more beer), probably a pale or an amber—nothing too hoppy. Penn Cove mussels are the best, if you can find them. No cracked shells, no dead mussels—cook them alive!

What do you love most about living in your neck of the woods (the wilds of Oregon)? I’ve heard it’s beautiful…
It is beautiful, and thanks to the weather it stays that way year round. (Yes, it rains a bit, but not as much as you’ve heard.) As to why I love it, I’ll mention three Bs: books, bistros, and beer. There are a lot of bookstores in Portland, including the city block-sized Powell’s, which is just amazing. Want to get lost among the stacks? Go to Powell’s. Even better, the food scene in Portland is awesome. Restaurants, farmer’s markets, food carts, Voodoo Donuts—yes, I’ve put on 20 pounds since moving to Oregon, but it’s happy fat. And then there’s the beer. There are 50 different breweries in Portland, about 150 in the state, and more styles of microbrew on tap than you can imagine.

What next? Anything else you’d like to share about upcoming projects or events (guilty pleasure, the best way to skin a fish, anything at all!)?
Next will either be the sequel to Portlandtown or an unrelated novel call Pumpkin Eater. The later is about ghosts, skeletons, and Halloween. Yeah, more dead things.

And just for kicks, here’s a recipe for Beer-Steamed Mussels. Enjoy!

BEER-STEAMED MUSSELS
If you’ve never made mussels at home you’re in for a treat. Few things are as easy or as flavorful. Don’t worry if a few mussels refuse to open, even if all their brethren have already yawned. Remove those that have opened and give the stragglers a minute or two on their own. If they still won’t open, toss ‘em.
1 tablespoon unsalted butter
1 large garlic clove, minced
Freshly ground black pepper
¾ cup beer (pale, amber, or ESB)
2 tablespoons flat leaf parsley, chopped
2 pounds live mussels
baguette, sliced and lightly toasted
Scrub and debeard the mussels, tossing any that are cracked or remain open after handling.
Place the butter and garlic in a large saucepan (or pot) over medium heat. Season with pepper and cook until softened, 1 to 2 minutes. Add the beer, parsley, and mussels, cover, and bring to a boil over medium-high heat. Steam until the shells have opened, 4 to 6 minutes. (If you don’t have a large enough pan, cook in batches so as not to overcrowd.)
Transfer mussels and cooking liquid to a large bowl. Serve immediately with bread for dipping. NOTE: if liquid seems gritty, carefully pour into a separate bowl, leaving the grit behind, and then pour over mussels.
Serves 3 to 4