Interview (& Giveaway): DJ McIntosh, author of The Witch of Babylon

Please welcome DJ McIntosh to the blog! DJ is the author of the historical thriller, The Witch of Babylon, which just came out! She was kind enough to answer a few of my questions, and we’ve got a copy of the book up for grabs, so be sure to check out the details at the bottom of the post! 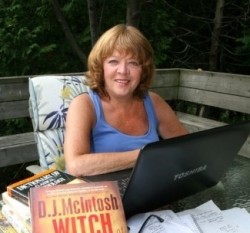 Your first novel, The Witch of Babylon, just came out in the US this week! Will you tell us a bit about it?
An original engraving of The Book of Nahum, seventh book of the twelve minor prophets in the Old Testament, has been looted from the Baghdad Museum at the outset of the Iraq War. A childhood friend lures John Madison into a deadly game, daring him to find the engraving. As his quest deepens, Madison learns the engraving leads to a shocking revelation about the origins of alchemy, an ancient treasure cache and the truth behind a famous story the world believes is just a myth.

Did you always want to be a writer? Will you tell us about your journey?
I always wanted to be a writer but it took a long time with lots of detours on the way. Although armed with a university degree, English major, my first career was as a city planner. After my daughter was grown, I left city planning and went back to my first love – writing.

I spent those first years networking with other authors, and joining organizations like Sisters in Crime. After hearing much doom and gloom about slush piles I decided to short circuit that and entered the Crime Writers Association Debut Dagger competition. It was truly a euphoric moment when I learned The Witch of Babylon was chosen as a finalist. I got an agent soon after that and in 2009 Penguin Canada bought the first rights. We then went on to sell the book to nineteen other countries – and just last summer it made the national bestseller’s list in Canada. It’s been an amazing ride!

Mesopotamian history and culture were big influences in writing The Witch of Babylon. What was one of the most fascinating things you discovered during your research?
Great question! I learned about so many fascinating features from that historical period but one of them would be discovering that Mesopotamians developed a rudimentary battery, possibly used to electroplate gold, more than a millennium before the modern battery was invented. This is just one of their great achievements. The Baghdad Batteries, as they came to be known, were stolen from the National Museum of Iraq in 2003 and have not yet been recovered. 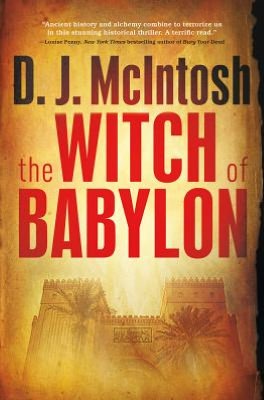 How long did The Witch of Babylon take to write, from start to finish?
A little over eight years including all the research. This didn’t involve writing every day by any means rather, I wrote and researched in junks of a couple of months at a time.

What are some of your literary influences?
Hundreds of them sit on my bookshelves. My best teachers have been other writers and having spent so much time writing technical reports, it took ages to get that out of my system. A few of the writers who I could not hope to emulate but learned a great deal from were: Anne Michaels (Fugitive Pieces), Dennis Lehane (A Drink Before the War), Stephen King (The Girl Who Loved Tom Gordon), Arturo Perez Reverte (The Club Dumas), Frank Herbert (Dune).

What are you reading now?
The Night Circus by Erin Morgenstern

What makes you want to set aside a book in frustration?
A weak plot, where I can easily guess the ending. Conversely, a great writing style usually reels me in. Huge credibility gaps are non-starters too.

If you could read one book again for the first time, which one would it be?
Lord of the Rings

If you could pick the guest list for your perfect dinner party (among people alive or dead), who would you invite?
Well it would be dinner for eight not at eight. Edgar Allen Poe, Cornell Woolrich, Emily Bronte, H.P. Lovecraft, Susan Hill. Then I’d invite John Cleese just to lighten things up and Sir Arthur Conan Doyle to sort out the inevitable mayhem.

If I was to visit you in Toronto for the first time, where would you take me?
One of Toronto’s highlights are its multi-cultural neighbourhoods. Great shopping and fantastic family run restaurants with menus that come from all corners of the world. Little India, Greektown, Chinatown and Little Italy are some of my favorites.

I read that a couple of your favorite things are museums and live music. What’s a favorite museum you’ve visited and which bands do you go out of your way to see?
I’ve spent many happy hours in New York’s Metropolitan Museum of Art and the British Museum’s Assyrian antiquity collection is unsurpassed. In both cases, the setting and architecture are inspiring too. While not strictly a museum, wandering through Central Park with its wonderful art work, sculptures, gates and bridges is always a high point of my visits to New York.

I’d go out of my way to see: Carlos Santana, Jeff Beck, the Tran Siberian Orchestra, Coldplay, and Alanis Morissette.

Is there anything else you’d like to share with us about upcoming projects or events?
The next in the series – The Book of Stolen Tales – is on its way and will be published in late spring of 2013. In this, John Madison hunts for a rare 17th century book – the first European anthology of fairy tales. The dark origins of these tales come to life as Madison is captivated by a beautiful but abused young woman and threatened by a man who seems more phantom than real. His search ends at the Mesopotamian underworld, a real archaeological site.
Thanks so much for the interview – it was fun!
Keep up with DJ: Website | Twitter

**GIVEAWAY DETAILS**
1. You MUST fill out the form below
2. Giveaway is for 1 copy of The Witch of Babylon by DJ McIntosh to 1 winner.
3. Giveaway is open to US addresses only (No PO Boxes)
4. Must include a valid email address with your entry (no need to leave it in the comments, just include it when you fill out the rafflecopter form)
5. You must enter on or before 10/29/12
6. Giveaway book courtesy of Tor
7. Please see my Giveaway Policy.

About The Witch of Babylon:
John Madison is a Turkish-American art dealer raised by his much older brother, Samuel, a mover and shaker in New York’s art world. Caught between his brother’s obsession with saving a priceless relic looted from Iraq’s National Museum and a deadly game of revenge staged by his childhood friend, John must solve a puzzle to find the link between a modern-day witch and an ancient one.

Aided by Tomas, an archaeologist, and Ari, an Iraqi photojournalist—two men with their own secrets to hide—John races against time to decipher a biblical prophecy that leads to the dark history behind the science of alchemy. Kidnapped by villainous fortune hunters, John is returned to Iraq, where a fabulous treasure trove awaits discovery—if he can stay alive long enough to find it.