Please welcome Christopher L. Bennett to the blog! Christopher is the author of the upcoming sci-fi novel Only Superhuman (Oct. 16th), and was kind enough to answer a few of my questions. Also, I’ve got a copy of the book up for grabs, courtesy of Tor, so be sure to check out the giveaway details at the bottom of the post! 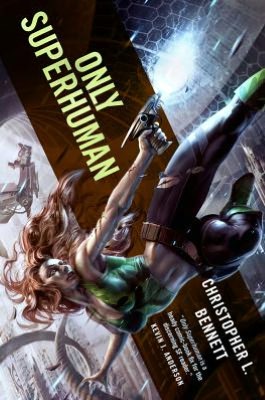 You’ve written over 10 novels, many of them set in the Star Trek universe, and your newest novel, Only Superhuman, will be out on the 16th! Have you always wanted to be a writer? Will you tell us a bit about your journey?
I always liked to daydream and make up stories, and my parents instilled a love of reading in me at an early age. When I was thirteen, I had a set of building blocks for making futuristic cities and populated them with homemade toy aliens, and one day I told myself a whole story about them entirely in my head, and that was when I realized I was a writer. The first time I tried to write something for other people was for the junior-class play in high school, but that went badly awry because some of my collaborators took writing a lot less seriously than I already did. I didn’t start writing with intent to publish until I was in college, and like most writers I spent years getting rejection letters from magazines, learning from the rejections, and trying harder to raise my game. I owe a lot to former Analog editor Stanley Schmidt, who saw enough potential in me to give me guidance and advice in his rejection letters, and who eventually bought my first published story, “Aggravated Vehicular Genocide,” in 1998, as well as an indirect sequel, “Among the Wild Cybers of Cybele,” in 2000. After that I didn’t have much more success until I became acquainted online with the editors of Pocket’s Star Trek novels, which eventually led to an offer to pitch to the Starfleet Corps of Engineers e-book series, and that led in turn to more Trek work including novels. My main Trek editor for those first five years, Marco Palmieri, helped me improve a lot as a writer, and I’m glad that he ended up at Tor and served as an assistant editor on Only Superhuman. My years in the Trek writing community also let me get to know Greg Cox, a fellow Trek novelist who’s also a freelance editor for Tor, and so he was willing to take a look at Only Superhuman and liked it enough to acquire it.

Will you tell us a bit about Only Superhuman?
Only Superhuman is a hard science fiction take on the idea of superheroes—or, if you like, a work of transhumanist SF with a superheroic flavor. It’s set in a 22nd-century Asteroid Belt civilization where humans have embraced genetic and bionic modifications to thrive in the harsh conditions of space, and many have taken it far beyond basic survival and acquired superhuman abilities. With few historical role models, many of theses “mods” look to the superheroes—and sometimes supervillains—of classic fiction for inspiration. My protagonist Emerald Blair, the Green Blaze, embodies multiple facets of mod society. She’s a child of the Vanguardians, who were the first generation of superhuman champions, but then had a falling out with the rest of humanity; some say they grew too ambitious for power, others that they were persecuted and grew bitter. Emerald had her own falling out with her Vanguardian father due to a childhood tragedy, leading to an adolescent career as a superpowered delinquent and some bad choices she came to regret deeply. Now she seeks to atone by joining the Troubleshooters, a corps of mods who use their powers to keep the peace in the chaotic Belt, embracing the trappings of superheroes to win the people’s trust. But the Vanguardians are back and making a new play for power, and Emerald is sent in to use her family ties to discover their real agenda. But she learns that it may be the Troubleshooters who have been corrupted. Emerald is torn between loyalties and identities and must try to distinguish the true heroes from those who crave power for their own ends.

What do you love most about writing science fiction?
I love the ability to create whole new worlds and universes, to explore them and figure out how they work. I like to create futures that are better than the world today, closer to how I wish the world would work, but with enough complications and challenges to keep things interesting. I believe we can make the world better, but that it would take a lot of hard work and diligence to keep it from going wrong, and I like to explore that process in my work. I think science fiction can be a powerful tool for inspiring people, offering them a road map for possible futures, and so we need more science fiction that offers positive visions of the future to work toward, rather than just dystopias to avoid. 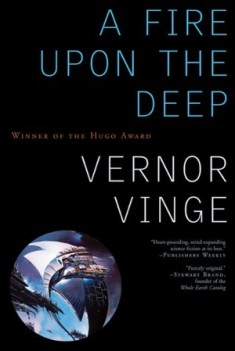 What are some of your favorite novels?
Some of the novels I enjoy the most or have been most influenced by include Arthur C. Clarke’s Childhood’s End, Rendezvous with Rama, and The Fountains of Paradise, Isaac Asimov’s The Caves of Steel and The Naked Sun, Carl Sagan’s Contact, Vernor Vinge’s A Fire Upon the Deep, Diane Duane’s Young Wizard and Feline Wizard novels and her first Star Trek novel The Wounded Sky, and two classic Superman novels by Elliot S! Maggin (yes, that’s supposed to be an exclamation point), Last Son of Krypton and Miracle Monday.

If you could read one book again for the very first time, which one would it be?
I can’t think of just one. It would have to be something with a really striking and delightful twist whose impact is lessened onc e you know it—perhaps a great mystery novel or something of the sort.

What’s one of your favorite popular super heroes, and why?
I’m a big fan of Spider-Man, whom I was glad to get the opportunity to write in the novel Drowned in Thunder for Pocket Star Books. There’s so much to like about him. He’s a wish-fulfillment figure for nerds and social outsiders like me, he’s a hero who relies as much on his intellect and determination as his physical prowess, he’s a great comic hero with a rich sense of humor, and his story is a powerful statement about responsibility and the importance of wielding power wisely and selflessly. He actually has a lot in common with Only Superhuman’s Emerald Blair; when I wrote Drowned in Thunder, I realized I was using a lot of the same creative muscles to write Spider-Man that I’d used to write Emry.

When you manage to find some free time, how do you like to spend it?
These days I spend far too much of my time on the Internet, often to the detriment of my other preferred activities, which include going for walks, reading, or listening to my collection of TV and movie soundtrack albums.

Is there anything else you’d like to share with us about upcoming projects or events (or anything at all!)?
Aside from being at New York Comic-Con this weekend, I’ll be at the Books by the Banks festival in Cincinnati on October 20. As far as projects go, I do have a new Star Trek novel in the works, but I’m not yet able to specify what it’s about. I’m also shopping a new original novel to agents.
Keep up with Christopher: Website
Pre-Order Only Superhuman: Amazon | B&N | Indiebound

**GIVEAWAY DETAILS**
1. You MUST fill out the form below
2. Giveaway is for Only Superhuman by Christopher L. Bennett to 1 winner.
3. Giveaway is open to US addresses only (no PO Boxes).
4. Must include a valid email address with your entry (no need to leave it in the comments, just include it when you fill out the rafflecopter form)
5. You must enter on or before 10/20/12
6. Giveaway books courtesy of Tor
7. Please see my Giveaway Policy.

About Christopher (via his publisher page):
CHRISTOPHER L. BENNETT has had multiple works of short fiction published in Analog Science Fiction and Fact as well as the online magazines DayBreak and Alternative Coordinates, and has written critically acclaimed novels based on Star Trek, Spider-Man, and X-Men, all of them with a hard science slant. Only Superhuman is his first original novel. He lives in Cincinnati, Ohio.