I made no bones about how much I adored Joe Lansdale’s Edge of Dark Water, so when I got a chance to ask Joe a few questions, I was beyond thrilled! Joe is a busy guy, a wonderful writer, and if you haven’t discovered him yet, he’s got a tremendous backlist, so you’ve got quite a lot of awesome to choose from. He just won a Lifetime Achievement Award from the Horror Writer’s Association (among more than a few Bram Stoker’s), so I thought he’d be a perfect spotlight during my Scare-a-Thon event.

Also, courtesy of the lovely folks at Mulholland Books, we’ve got a copy of Edge Of Dark Water up for grabs, so be sure to check out the details at the bottom of the post. 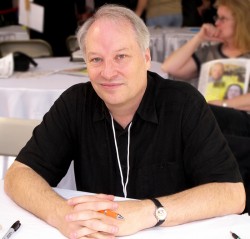 Please welcome Joe to the blog!

Joe, thanks so much for joining me for my October feature! As the winner of nine Bram Stoker Awards (and many others), you’re no stranger to the rush of your work being recognized on an international scale, but recently, you won the Lifetime Achievement Award, along with Rick Hautala. Did you ever imagine you would be this successful as a writer? Will you tell us a bit about how you started writing?
I never imagine that. I just wanted to write for a living because it’s what I love. It was always my dream job. Still is. I’ve been doing it since I was a child, placing articles, stories, novels, screenplays, etc. for forty years, and its still my dream job. I was a comic book nut in the late fifties and all through the sixties, but they led to my reading all manner of books and stories. I was also a fan of movies, just about any form of written entertainment. I don’t think I really had a choice. I never finished college, but I started teaching myself how to write by reading. I’m still teaching myself how to write by reading. Once I started selling, I just kept at it. I worked all manner of jobs, the last being a janitor, and then I was able to go full time. I’ve been at it ever since. 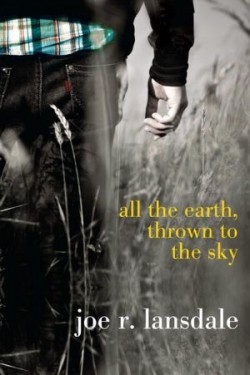 Your most recent release, All the Earth, Thrown to the Sky (Sept 11th, 2012), is your first young adult novel. What made you decide to write a book especially for young adults? Was it a challenge to make the switch?
Actually, I had written another Young Adult titled THE BOAR. I was fond of it. It was done for a small press, and then reprinted by another small press. I liked doing it so much I planned to do it again. In many ways, a lot of my adult fiction is really young adult fiction, in that young adults are the protagonists. It’s a kind of story I love a lot. I enjoy coming of age stories, stories where young people are experiencing the mysteries of growing up, the good and the bad.

You’re well known for your noir/crime novels, but also have some horror titles under your belt. What things do you find truly scary?
People. That’s what’s truly scary. Even supernatural horrors are symbolic of realistic horrors. People do some pretty awful things.

How do you think horror in fiction has changed from its heyday in the 80s to more recent offerings?
It’s more frequently contemporary, and it’s a lot more about the evils that humans do, and with less disguise about it. It’s also more graphic, though not exclusively. I like graphic and non-graphic. It depends on the story for me. I think it has also embraces the mainstream, or rather the mainstream has embraced it. I think the eighties started those trends and they have continued. There are now a lot of blending of romance, tons of vampires and zombies. Nothing wrong with any of that, but there’s so much of it, it’s not all that engaging anymore. There are exceptions, and they make it worthwhile. They are usually much more character driven pieces, better written material.

What do you consider “pushing the limits” when it comes to your writing?
I try not to think about that when I write. I don’t want to do it consciously. I let the story decide. 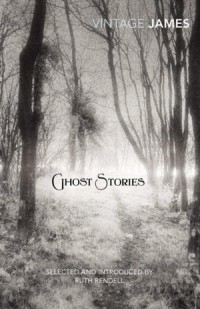 When looking for a good scare, who are your go-to authors?
I’m at the point where in the horror field I’m reading backwards. I’ve gone back to Machen and M.R. James, Algernon Blackwood, Poe, E.F. Benson. I love a lot of contemporary stuff, but my head has been there lately, which considering I’m thought to be one of those that kicked a few doors down, with a lot of assistance from other writers, I might add, it would seem I would be all about the modern approach. I am for the most part, but lately I’ve been rereading the old classics and writing a few stories in that vein.

What are a few of your favorite scary films?
I loved THE HAUNTING, from one of my favorite horror novels, THE HAUNTING OF HILL HOUSE. I really loved the recent THE WOMAN IN BLACK. I liked the novel, the play, which I saw in London, as well as the BBC film, and the recent film version. I love NIGHT OF THE LIVING DEAD, TEXAS CHAINSAW MASSACRE, a lot of the drive in horrors. My friend Lee Lankford just directed a film, CHRISTMAS WITH THE DEAD, based on a story of mine with a script by my son, Keith Lansdale. It stars Damian Maffei and Brad Maule, and my daughter, son-in-law, and friend and horror writer Chet Williamson have roles in it. I love films. 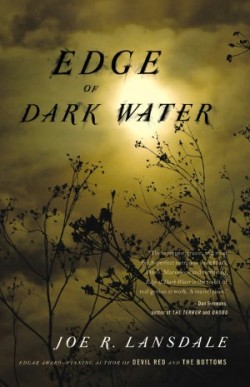 Is Halloween an event at your house? If so, how do you like to celebrate?
I love Halloween, but we usually keep it simple. A horror movie, or I read a fine horror story. Our kids are grown, so we don’t have trick’r treating anymore. It seems I’m often on some kind of trip, doing an event on Halloween. Couple years back in New York, my daughter was with me. She went to a Halloween extravaganza down town, and I stayed in the hotel anticipating watching a good horror film. There was one on. Not one. Limited cable, I like to think. I did, however, have a horror story with me, so I read that and wrote a piece on a writer I was asked to do. So, it wasn’t perfect Halloween, but it was something. This year I’m giving out an award for a Halloween Writing Contest, which, by the way, my daughter is one of the judges. Then I hope to come home and watch a Halloween movie. I teach class on Wednesday night at the University, but I let my students off to have a work day, and, to have Halloween. Class would have been mostly empty anyway, so I let them loose to have fun, and not waste my night by not showing up. And you know what. I don’t blame them.

Is there anything else you’d like to share with us about upcoming projects or events (or anything at all!)?
I have the paperback edition of my novel EDGE OF DARK WATER coming out from Mulholland Books. It’s still available in hardback, but comes February there will be the paperback. It has a readers guide in the back, and an interview with me. I’m going to be with Lee Lankford in Torino, Italy for a showing of CHRISTMAS WITH THE DEAD at the Torino film festival. I love Torino. I love Italy. I enjoy seeing the movie. It’s a win, win, win.
Keep up with Joe: Website | Twitter

**GIVEAWAY DETAILS**
1. You MUST fill out the form below
2. Giveaway is for Edge of Dark Water by Joe Lansdale to 1 winner.
3. Giveaway is open to US addresses ONLY (No PO Boxes)
4. Must include a valid email address with your entry (no need to leave it in the comments, just include it when you fill out the rafflecopter form)
5. You must enter on or before 10/27/12
6. Giveaway book courtesy of Mulholland Books
7. Please see my Giveaway Policy.

About Edge of Dark Water:
“The strongest, truest, and most pitch-perfect narration since Huck Finn’s. Marvelous and terrifying, EDGE OF DARK WATER is the result of real genius at work. A masterpiece.”—Dan Simmons

May Lynn is a pretty girl who dreams of becoming a Hollywood star. Until her dead body is dredged up from the Sabine River.

Sue Ellen, May Lynn’s strong-willed teenage friend, her friends Terry and Jinx, and Sue Ellen’s mother set out to dig up May Lynn’s body, burn it to ash, and take those ashes to Hollywood. If May Lynn can’t become a star, at least her remains can be spread in the land of her dreams.

Pursued by Uncle Gene and Constable Sy, who’re after the money they’ve found, and Skunk, an all-too-real legendary killer who’s after their lives, they begin to understand that when you set out to make the dreams of a friend your own, your worst nightmares might come along for the ride.