Here to kick off the week is Rob Reid, author of Year Zero! Rob is much more than just a new fiction author (he’s also as sarcastic as I am), and he kindly took some time out of his busy schedule to answer a few of my questions. Please welcome Rob to the blog! 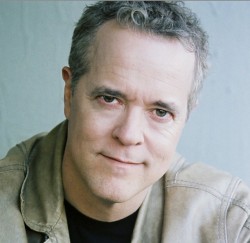 Rob, as the founder of Listen.com, which created the Rhapsody digital music service, you have a very rich background in the tech industry. You’ve also written books on Silicon Valley and Harvard Business School. What made you decide to take the plunge and write a sci fi novel?
I’ve been deeply interested in writing fiction since shortly after college. I spent the year after graduating in Cairo, as a Fulbright scholar, and began work on a novel in a sort of magical realist style that was heavily influenced by Marquez’s 100 Years of Solitude. I never came close to finishing it. But when I got to business school, my first stop was the office that connects students up to alumni for career advice. I was probably the only person in HBS history to ask about writers amongst our alumni – and I was told that there was precisely one! The result was my memoir-ish book about being a first-year student at HBS. There were strongly fictional elements in it (because all of the student characters other than me were “composite” characters who brought together various elements of a number of people that I knew). I graduated and got inhaled by the Internet (becoming an Internet fulltimer quite early – 1995). Next thing I new, fifteen years had gone by! I love technology & hugely enjoyed being an entrepreneur, but I never lost sight of my interest in writing fiction. Then one day my wife & I were traveling around in Colombia, and I kind of spontaneously started writing Year Zero to amuse us both. I kept it up after we got home because we were both having so much fun with it. It took me about a month to acknowledge reality, and realize that I was in fact in the throes of writing a novel full-time…

What would be your elevator pitch for Year Zero?
Aliens seek to erase the ruinous fines on their vast collections of pirated American music by destroying the Earth. A young attorney must use his wits to stop them. 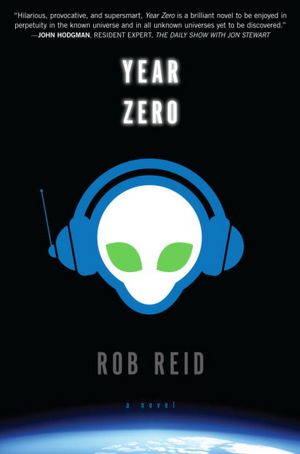 Why aliens?
I considered using Bulgarians, but decided that Bulgarians wouldn’t be believable or terrifying enough. For one thing, Bulgarians currently lack the technology to destroy the Earth if they wish. For another, the “Bulgarian invasion” tradition is quite thin in modern storytelling. Not so with aliens.

What are some of your biggest sci-fi influences?
Stanislaw Lem above all – he wrote some fabulous (and incredibly witty) speculative fiction, mainly in the 50’s, 60’s, & 70’s (although he still puts out the occasional story collection to this day). He lived most of his writerly years in communist Poland, which he fled in 1982. Douglas Adams, certainly. And to a lesser degree, Neal Stephenson.

What do you like to see in a good book?
OK, this will sound trivial, but can we start with CHAPTER TITLES? Writing is such a joy, and we writers are a creative bunch. So I’m always disappointed when a gifted author doesn’t bother with chapter titles. This is a great opportunity to foreshadow, lead, or just share a playful wink with your readers. So why not avail yourself of it, and share just a bit more fun with the folks who are flipping the pages? To me, a great book without chapter titles (particularly one with a particularly witty voice) is like Christmas without stocking stuffers – or a meal at a fabulous restaurant without appetizers. So by all means, give me chapter titles. Oh – and I also like a great plot, writing style, and characters…

What makes you want to set a book aside in frustration?
When an author makes a high-handed attempt to lampoon something that he or she knows essentially nothing about. I often see literary authors attempt this with white collar office culture. There’s plenty about modern business society that can and should be lampooned, even skewered. But so often it’s done by a tone-deaf MFA whose sum total of professional world experience is watching the “Office Space” DVD, and maybe working a few weeks as a de facto embedded reporter masquerading as a temp.

If you could read one book again for the very first time, which one would it be?
“And Then We Came to the End” by Joshua Ferris. This is the OPPOSITE of the phenomena that I just described. He takes on modern business society and lands countless punches (often to hysterical effect) because he’s a native of the land that he describes.

Quick! Name something that makes you laugh out loud.
YouTube videos of businessmen slipping on banana peels. Gets me every time.

When you manage to carve out some free time, how do you like to spend it?
Lingering over a home-made supper and a bottle of wine with my wife Morgan and Ashby the Dog.

Is there anything else you’d like to share with us about upcoming projects or events (or anything at all!)?
I’m writing a series of essays about copyright and piracy in the digital age that will crop up in various venues online and in print. The Wall Street Journal published the first one earlier this summer.
Keep up with Rob: Website | Twitter
Snag a copy of YEAR ZERO: Amazon | B&N | Indiebound