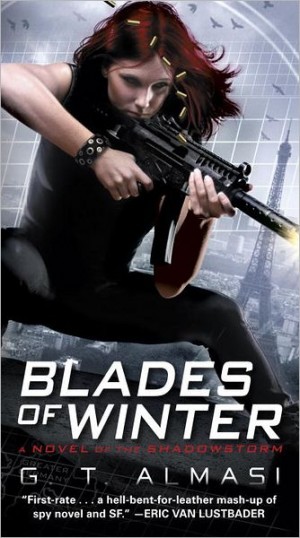 Kind thanks to DelRey and NetGalley for providing a review copy

Nineteen-year-old Alix Nico, a self-described “million-dollar murder machine,” is a rising star in ExOps, a covert-action agency that aggressively shields the United States from its three great enemies: the Soviet Union, Greater Germany, and the Nationalist Republic of China. Rather than risk another all-out war, the four superpowers have poured their resources into creating superspies known as Levels.

Alix is one of the hottest young American Levels. That’s no surprise: Her dad was America’s top Level before he was captured and killed eight years ago. But when an impulsive decision explodes—literally—in her face, Alix uncovers a conspiracy that pushes her to her limits and could upset the global balance of power forever.

REVIEW
Alix Nico is only 19. This doesn’t keep her from an abundance of ass kicking, covert ops, black ops, and um, killing. Alix is an operative with ExOps, and her enhancements make her a pretty badass asset. It’s 1980, and Blades of Winter’s world is definitely a little to the left of ours, in terms of history. The Middle East and France are controlled by Germany and the Blades are determined to remove German control from their rightful territories. Shadowstorm has thus far been a pretty discreet battle between the Big Four (Germany, US, Russia, and China), but it’s about to come to a head.

Blades of Winter starts off with a bang, literally, when Alex takes a Job Number meant for a much higher, more experienced Level, and nearly gets killed in the process. She’s not what you call subtle, and successfully succeeds in angering the powers that be. She’s good, though, really good, and they need her. Turns out they’ve reopened the investigation into the disappearance and alleged termination of her father (Big Bertha), and it would take death to keep Alix away from this mission. So, armed with her trusty Lion Ballistics LB-505 (Li’l Bertha) that she inherited from her dad, Alix saddles up with her partner and lover, Patrick, and they head off to battle. And what a battle!! This mission is a globe hopping, blood soaked descent into hell, not only for Alix, but for her handlers. To say she’s a handful is a vast understatement. Capturing an enemy alive for questioning is terribly hard for Alix, since she tends to kill nearly every enemy she comes in contact with. Heavily augmented, she loves to use her bionic hand to actually reach into people and do damage. One memorable scene involves Alix, the enemy (his collarbones), a parachute, and the Eiffel Tower. That’s not the only memorable scene though. Alix is a tough-as-nails, borderline sociopathic, hot-headed, impulsive, somewhat emotionally immature killing machine.

She’s also a killing machine that terribly misses her father.

You must keep in mind that Alix began her covert ops training when she was only 12, and has never really been allowed to have any semblance of a normal childhood. The psychological aspects of this are staggering, and the author does a very good job of creating a portrait of a young woman whose emotional development has been effectively cut off at the knees. Corralling Alix sort of brings to mind trying to corral a room full of feral cats and while her impetuousness can be trying at times, there’s a hurting little girl inside of her that does come to the surface, especially when she’s with her mother, and these scenes did quite a bit to soften her character. She’s also desperately in love with her partner, Patrick, and poor guy, he has the patience of a saint when it comes to Alix, and he loves her too, no doubt about it. I’d say Alix could benefit from a hug (or 50), but I’d be afraid she’d rip my lungs out. Just sayin’.

The action is nonstop, adrenaline soaked, blood drenched and cinematic, and the fight scenes are some of the best I’ve ever read. Add to the mix a diabolical human cloning program code named Carbon, a possible mole (or moles) in ExOps, and of course, the investigation into what really happen to Alix’s father, and you’ve got an explosive first novel you won’t soon forget. Blades of Winter is complex and exciting, and the shocker of an ending will have you wishing that the sequel was at hand. I can’t wait for the next book in this series!