Fantasy Interview: Will Hill, author of Department 19: The Rising

Interview: Will Hill, author of Department 19: The Rising

I’m thrilled to have Will Hill on the blog today! Will is the author of the Department 19 series, and the newest book, The Rising, is out today. He was kind enough to answer a few questions for me, so please welcome Will to the blog! 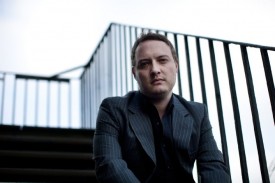 Will, the 2nd book, Department 19: The Rising, in your blockbuster YA series will be out here in the states tomorrow! I also may have read something about being signed for 3 more books recently.
When you started this series, did you ever think it would be this big?
I really don’t know how big it is, to be honest! I stay away from sales figures and all that kind of stuff – if my publishers are happy, then so am I.

To be honest, I’m just thrilled whenever anybody tells me they’ve spent their time reading something I wrote, and doubly so if they tell me they liked it – you write a novel, particularly a first novel, without knowing whether anyone apart from your friends and your mum will ever see it. You can’t write something expecting it to be successful, otherwise you’re just setting yourself up for disappointment. So my ambitions now are the same as they always have been – I hope that the people who do read it, enjoy it, and want to know what happens next. It must be nice to be Suzanne Collins or JK Rowling, but I would bet that the idea of so many people reading their stories excites them more than their royalty cheques – although theirs probably are pretty exciting! 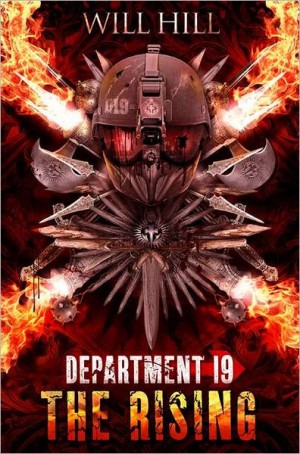 Did you always want to be a writer?
If I did, I didn’t realize it until much later! I’ve met writers who can’t remember ever wanting to do anything else, but when I was a kid I wanted to be a pilot, a footballer, a drummer, a fireman, a comic book artist, and, for a long time, a film director.

But when I look back now, I was always writing – little bits and pieces to start with, lines of dialogue, descriptions of bits of action and characters. When my friends and I made short films in the school holidays, I always ended up deciding what would happen, rather than acting or manning the camera. I wrote more through school and college, and realized that it was what I wanted to spend the rest of my life doing after I graduated, when I tried to write a novel for the first time. It was hard, and I made every mistake that first-time writers always make, but I fell in love with the process, including the painful bits. Since then, I’ve tried to do nothing else but write.

For those that haven’t started the series, will you tell us a bit about it, and your main character Jamie Carpenter?
Jamie is a very normal teenage boy, living a very normal life, until the night his dad is shot dead outside their house by shadowy figures who appear to be armed police. Two years later, he and his mum are still struggling to put their lives back together when things get even worse; Jamie is attacked by a girl with red eyes and sharp teeth, and his mother is kidnapped. Jamie is rescued by a monster who is absolutely not supposed to be real, and brought into the world of Department 19, a secret branch of the British government that polices the supernatural, and who have more to do with his family than he could have ever realised. They are also the only people who might, just might, be able to help him rescue his mum, who is in the hands of one of the oldest, and most evil, creatures in the world…

Was there any particular inspiration for Jamie?
I wanted him to start out as a real everyman – at the beginning of the story there is nothing special about him at all – who is forced to find out how strong and resilient he really is by the situation he finds himself thrown into. I tend to think that we find out who we really are when we face adversity, and I wanted that to be the case with Jamie. He is pretty similar to the teenager I was – he likes football, and music, and computer games, and all the other things that normal teenage boys are into. In my head, he looks quite a lot like my oldest friend, but he’s not really based on anyone in particular. Although he does sound a bit like me when I was his age!

Do you have any unusual writing quirks? Anything you need to get the creativity flowing?
I’m very much a creature of habit, and of routine. When I’m planning and plotting, and then again when my editor and I are editing, I work at home, with music on and a constant supply of coffee. When I’m writing actual prose, I go and work in the British Library, which is not too far from where I live in London, and I do get a bit obsessive. I go at the same time, work in the same room, try to work in the same desk (although that doesn’t always come off – in which case I get as near as I can and glare at whoever is in ‘my’ seat) and lay my stuff out the same way. I always get my best work done during the same part of the day (between about 3pm and 7.30pm) and I normally listen to one film on my laptop, over and over again – it becomes a bit like white noise, and plugs me immediately back into my work. For the third book in the D19 series, it’s been David Mamet’s Glengarry Glen Ross – I could literally perform it as a one-man show at this point! 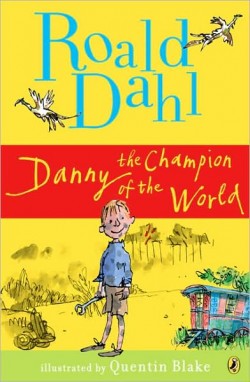 What was one of your favorite books as a child?
There were so many, but the one I think back to most often is Danny The Champion Of The World by Roald Dahl. I love all of Dahl’s novels, and he is a huge influence on me – I love the way he portrays children, and how they see the world, and how dark he is prepared to let his stories get. His more fantastical novels, the ones he is most famous for (Charlie And The Chocolate Factory, The BFG, The Witches) are wonderful, but I think I love Danny the most – it is perhaps a bit far-fetched (the pheasant plot is really quite crazy!) but it’s ultimately a very real story about a boy and his dad, and it rings true, even now. Anyone who hasn’t read it should go and grab themselves a copy at once.

What are a few of your favorite authors or novels?
This is probably going to need to be a list:
Stephen King – It, The Stand, ‘Salem’s Lot, the Dark Tower series
Roald Dahl – Danny The Champion Of The World, Fantastic Mr Fox, Matilda, Boy, Going Solo
Philip Pullman – the His Dark Materials trilogy
JK Rowling – the Harry Potter series
Bret Easton Ellis – Less Than Zero, American Psycho, Lunar Park
Patrick Ness – A Monster Calls
Jonathan Lethem – Fortress Of Solitude, Motherless Brooklyn, Gun With Occasional Music
Philip Reeve – the Mortal Engines quartet
George P. Pelecanos – The Big Blowdown, and the rest of the Washington quartet
Ted Hughes – The Iron Man (The Iron Giant in the US)
Clive Barker – Weaveworld, Imajica, The Books Of Blood

If you could read one book again for the first time, which one would it be?
The Secret History by Donna Tartt. It blew me away so completely when I read it for the first time that I didn’t read it again for years – I was genuinely scared that it couldn’t possibly be as good as I thought it was. But when the time eventually came, it was just as good again – so clever, so unbelievably assured for a debut novel, and just beautifully, heartbreakingly well written. 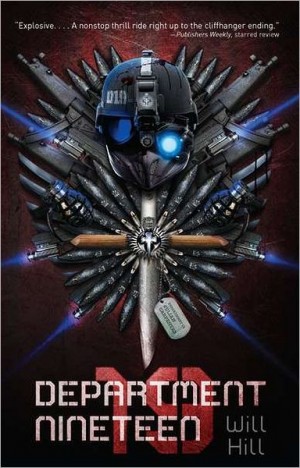 What do you consider essential for a basic vampire hunting kit?
The men and women of Department 19 use all kinds of hi-tech, sophisticated equipment, but even they have never been able to come up with a better method of destroying vampires than a good, sharp stake. To be fair, theirs are metal and are fired out of a pneumatic launcher, but nonetheless – stakes are still the cornerstone of vampire hunting!

When you manage to find some free time, how do you like to spend it?
The concept of free time is a weird one, to be honest with you! When I get a period of time where I’m not working on the Department 19 series – when my editor is reading it, or when it’s being copyedited or proofread, I normally grab the chance to work on one of the other projects I’ve got rattling around in my head. So to be honest, when I’m not writing, I’m writing 🙂

I’ve written short stories for a couple of anthologies that are coming out later in the year, and I’ve got three novels (that are nothing to do with vampires!) in various stages of development – I’m always grateful when I get a day or two to spend on any of them.

Quick! Name something that makes you laugh out loud.
Meerkats.

Is there anything else you’d like to share with us about upcoming projects or events (or anything at all!)?
Department 19 is out now in paperback from Razorbill, and book two, The Rising, is out in a week or so. The third book in the series, Battle Lines, will be out next summer, and the first short story I’ve written since I was at University comes out in an anthology called Magic (published by Solaris) towards the end of the year. Apart from that, everything else is pretty much wait and see… 🙂

I’m on Twitter and Facebook and I have a blog  – following any of those is the easiest way to keep up with what is going on with me and the books.

Thanks very much for having me!

Read an excerpt of The Rising

About Department 19:
Jamie Carpenter’s father is dead, his mother is missing, and he was just rescued by an enormous creature named Frankenstein. Now Jamie is pulled into a secret organization responsible for policing the supernatural, founded more than a century ago by Abraham Van Helsing. . . . Department Nineteen takes us through history, across Europe, and beyond – from the cobbled streets of Victorian London to prohibition-era New York, from the icy wastes of Arctic Russia to the treacherous mountains of Transylvania. Part modern thriller, part classic horror, it’s packed with mystery, mayhem, and a level of suspense that makes a Darren Shan novel look like a romantic comedy.
Purchase Department 19: Amazon | B&N

About Department 19: The Rising-
Sixteen-year-old Jamie Carpenter’s life was violently upended when he was brought into Department 19, a classified government agency of vampire hunters that was formed to deal with a little problem . . . known as Dracula.

But being the new recruit at the Department isn’t all weapons training and covert missions. Jamie’s own mother has been turned into a vampire – and now Jamie will stop at nothing to wreak revenge on her captors. Even if that means facing down Dracula himself.

The Rising is a fast, furious, can’t-turn-away thrill ride that will suck readers in just like a video game. This riveting second book in the Department Nineteen series is packed with cutting-edge gadgets, international locales, and daredevil action that tumbles ferociously across the page – perfect for fans of Darren Shan and Anthony Horowitz.
Purchase The Rising: Amazon | B&N