I’m so thrilled to have the lovely Tiffany Trent on the blog today! Tiffany is the author of the Hallowmere series and the first of a brand new series, The Unnaturalists! Please welcome her to the blog!

Tiffany, you’re the author of the Hallowmere series, numerous short stories, and your brand new steampunk YA fantasy, The Unnaturalists! Have you always wanted to be a writer? Will you tell us a bit about your journey?
Since I was nine. I’d always wanted to write fantasy and science fiction, but was discouraged from it for many reasons (not literary enough, had nothing to do with my homework, was weird, etc., etc.). That slowed me down, but didn’t deter me. I won a scholarship for the first science fiction story I wrote when I was 16. My first novel was published in 2007 ; it was a YA dark fantasy, In the Serpent’s Coils, the first in the Hallowmere series. Since then, I’ve published several short stories and am just days away from the release of my seventh novel, THE UNNATURALISTS.

How did you celebrate when your first book was published?
If I recall correctly, I gathered a bunch of good friends and went out to the best Japanese restaurant in town for dinner. And then we went over to Books-A-Million and did some interior decorating. 😉

Will you tell us a bit about The Unnaturalists?
Here’s the jacket copy:
In an alternate London where magical creatures are preserved in a museum, two teens find themselves caught in a web of intrigue, deception, and danger.

Vespa Nyx wants nothing more than to spend the rest of her life cataloging Unnatural creatures in her father’s museum, but as she gets older, the requirement to become a lady and find a husband is looming large. Syrus Reed’s Tinker family has always served and revered the Unnaturals from afar, but when his family is captured to be refinery slaves, he finds that his fate may be bound up with Vespa’s—and with the Unnaturals.

As the danger grows, Vespa and Syrus find themselves in a tightening web of deception and intrigue. At stake may be the fate of New London—and the world.

What do you like best about steampunk?
I love playing with alternate history. It allows us to dream of both a past that never was and a future that can never be. It’s a special little slice of time that’s fun to explore and re-imagine. 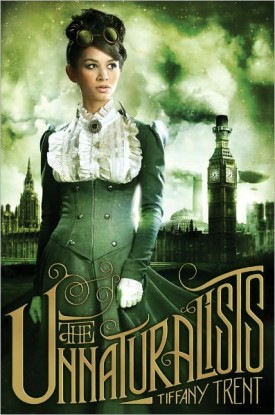 Why do you think steampunk is so popular all of a sudden?
It’s funny because some people say steampunk is popular and some say it isn’t. I think people are really interested in it for many reasons—the spectacular costuming, of course, but more than that there’s a lot in it that speaks to a spirit of hope and discovery. (Don’t get me wrong, though—some of that hope and discovery came at the expense of other nations and much of the natural world and we should be careful not to glorify the Victorians).

What are some of your biggest literary influences?
At one time, Frank Herbert and his novel DUNE were a huge influence. Also Madeleine L’Engle, Ursula Le Guin, Marion Zimmer Bradley, Ru Emerson, and Lloyd Alexander…The list is long and mighty.

Is there anyone that would bring out a fangirl squee if you were to meet them?
I kind of squeed when I saw Neil Gaiman in the bar at World Fantasy last year. I might squee if I met Frances Hardinge or Philip Reeve, though I doubt they’d appreciate that much.

When you manage to find some free time, how do you like to spend it?
Usually I’m out playing with my bees in the apiary.

If you could pack your bags and travel anywhere in the world tomorrow, where would you go?
I would love to go somewhere in the South Pacific—Papua New Guinea or Bali or Bora Bora. Those crystal blue oceans and volcanoes fill me with happiness. (A Mai Tai would help, too!)

Quick! Name something that makes you laugh out loud!
My husband. He’s always saying funny things at the weirdest times.

Is there anything else you’d like to share with us about upcoming projects and events (or anything at all!!)??
For upcoming events and other stops on the blog tour, here’s a good list.
My official launch party is at the Museum of Unnatural History in Washington, DC, on August 17th at 6 pm! Hope folks can make it!

As far as projects, I’m currently at work on the second (as yet untitled) book in THE UNNATURALISTS series.
Keep up with Tiffany: Website | Twitter | Goodreads