Joanne Reay, author of the brand novel Romeo Spikes, was kind enough to takes some time out of her super busy schedule to answer a few of my questions; not only about her new book, but also her screenwriting career, and more! Please welcome her to the blog, and be sure to check out the giveaway details at the end of the post (2 copies of Romeo Spikes up for grabs!).

Joanne, you’re an accomplished screenwriter. Was it a natural progression to go from screenwriting to writing books?
It was very natural, in the same way that death is a natural progression from smashing yourself repeatedly over the head with a hammer. With a movie script, you’re handling a relatively few story strands. With a novel, you find yourself weaving this huge rug of narrative, making a pattern that becomes increasingly detailed and complex. And to make matters worse, the loom upon which you weave is invisible and manufactured by a company called Bastard. But with all that said—the creative rewards of writing a novel are so much greater. Scriptwriters in Hollywood are treated with scant respect; it is assumed that every waiter and shop clerk can write a screenplay (and, sod it, they do) so if, unusually, a writer is invited to any meeting with the studio, actors or director, the only time their writing skills are called upon is to note down everyone’s coffee order. It was therefore something of a wonderful revelation to find that the publisher was genuinely interested in what I, the writer, wanted to do with the story and the characters. So for all the demands that novel writing imposes, I’m looking forward to once again sit down at my Bastard loom. 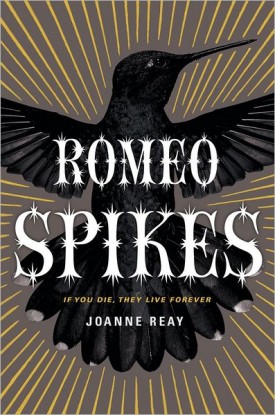 Your first novel, Romeo Spikes, is out today! Your baddies, The Tormenta, are pretty terrifying! What do you find particularly terrifying?
One of my first memories was walking along a parade of shops, following my mother. I would have been about five years old. I remember feeling that my mother was going too fast and I ran to catch up, reaching out to tug at her skirt to slow her down. As I did so, she turned and I realized that this wasn’t my mother. I had followed a woman with a similar yellow skirt. The shock made this woman’s face appear horrific to me and I felt a rising panic as I looked around the crowd, lost from my mother. I think that this moment lays at the heart of many dark characters that I create, where we think they are someone we can trust and only too late do we realize that they are not who we think they are.

What do you love most about writing fantasy?
In the same way that humans have a tendency to pick at a wound, I love to create characters that are bent on evil. The fantasy realm allows me to indulge this want, without lovingly detailing sociopaths who really should be brought to justice. Also, I love to build new worlds with their own history and potential. So, with Romeo Spikes for example, I could create a new international security agency called The Sinestra without having to limit myself to the real world workings of the CIA or MI6.

Do you have any particular writing quirks?
The name of every character, every place, every street or shop has a secret meaning that relates to the bigger story. Sometimes this connection may come to play a part in the narrative, but more often than not, it is never explicitly mentioned and never revealed. But I know what the connection is and that helps me feel that the story has an underlying mesh of logic and magic that holds it all together.

What are some of your favorite authors or books?
I love Martin Amis and The Information is one of my favourite books. He has a way of observing the smallest detail and then finding the most unexpected words to carry the meaning. And I love his use of names: Trish Shirt, Nicola Six, Keith Talent, a brand of beer called Porno—all genius.

If you could read one book again for the very first time, which one would it be?
A cliché—but what the hell. It would have to be Through The Looking Glass. I loved the book as a child and as I have grown I have come to realize the greater levels that are operating within the story. I would love the chance to open it afresh now, to see what it would give me. Would I find those deeper levels immediately, or would they still elude until the over-arching narrative has become familiar enough to see past it? Best of all, I would love to read “Jabberwocky” for the first time again.

Favorite line from a book or movie?
It only makes sense if you know the film, but the final line of Some Like It Hot is “Well, nobody’s perfect.” Apart from the fact that it is the funniest ending to a movie, I love the fact that Billy Wilder (writer / director) jotted it down as a temporary closing line, thinking that he would come up with a better option once they were filming. He never got the time to revise and the line was filmed as it was. Just goes to show that sometimes our instinctive brains—if we leave things alone and stop over-thinking—can come up with some really good stuff.

What was one of your favorite books as a child?
There was a book called The Dragon Hoard. I don’t remember who it was by, nor even the story. But it had a puzzle to solve and that sparked something in me.

When you manage to find some free time, how do you like to spend it?
My full-time job is film-writing and producing and I love it. But sometimes I feel that I thrash my brain a little too hard—like taking an eager dog for a walk and then after ten hours of rocky terrain, you look round to find you’re dragging a dead animal by the leash. So once in a while, I settle down with the remote control and watch back-to-back episodes of Judge Judy or CSI: Anywhere or old episodes of Columbo—anything that requires very little processing.

You live in Vienna, which is one of the most beautiful cities in Europe. If someone were to visit you there, where would you take them?
Back to the airport. I never invite anyone.

Is there anything else you’d like to share with us about upcoming projects or events (or anything at all! ie: fave curse word, fave alcoholic drink, if you drink ‘em, guilty pleasure, etc :-D)?
Whenever I curse the pressures of being a writer and producer, with all the deadlines, endless writing and constant travel, I think back to something a teacher told me at a parent’s evening for my youngest daughter. Katie had just joined kindergarten and as a new pupil, the teacher asked her about her family and whether her mummy had a job. Katie replied, “Mummy doesn’t have a job, she has an adventure.” And for that—I am ever grateful.
Read my review of Romeo Spikes

**GIVEAWAY DETAILS**
1. You MUST fill out the form below (lots of chances for extra entries)
2. Giveaway is for 2 copies of Romeo Spikes to 2 winners.
3. Giveaway is open to US  addresses only (no PO boxes).
4. Must include a valid email address with your entry (no need to leave it in the comments, just include it when you fill out the rafflecopter form)
5. You must enter on or before 8/21/12
6. Giveaway books courtesy of Gallery Books
7. Please see my Giveaway Policy.

About Romeo Spikes:
Working the Homicide squad, Alexis Bianco believes she’s seen every way a life can be taken. Then she meets the mysterious Lola and finds out she’s wrong. More weapon than woman, Lola pursues a predator with a method of murder like no other.
The Tormenta.

If you think you’ve never encountered Tormenta, think again. You’re friends with one. Have worked for one. Maybe even fallen in love with one.

They walk amongst us—looking like us, talking like us. Coercing our subconscious with their actions. Like the long-legged beauty who seduces the goofy geek only to break his heart, causing him to break his own neck in a noose. Or the rock star whose every song celebrates self-harm, inspiring his devoted fans to press knives to their own throats. The pusher who urges the addict toward one more hit, bringing him a high from which he’ll never come down. The tyrannical boss, crushing an assistant’s spirit until a bridge jump brings her low.

We call it a suicide. Tormenta call it a score, their demonic powers allowing them to siphon off the unspent life span of those who harm themselves.

To Bianco, being a cop is about right and wrong. Working with Lola is about this world and the next . . . and maybe the one after that. Because everything is about to change. The coming of a mighty Tormenta is prophesied, a dark messiah known as the Mosca.

To stop him, Bianco and Lola must fight their way through a cryptic web of secret societies and powerful legends and crack an ancient code that holds the only answer to the Mosca’s defeat. If this miscreant rises before they can unmask him, darkness will reign and mankind will fall in a storm of suicides. Nobody’s safe. Everyone’s a threat.

About the author:
First-time author Joanne Reay began as a documentary maker for The Discovery Channel, where her films focused on the mysteries of brain function and the human mind. She moved to the BBC, creating the acclaimed detective seriesThe Murder Rooms. As a film writer/producer, her credits include Bring Me the Head of Mavis Davis, Cold & Dark, andGallowwalker.