Horror This Is Not a Test by Courtney Summers

This Is Not a Test by Courtney Summers 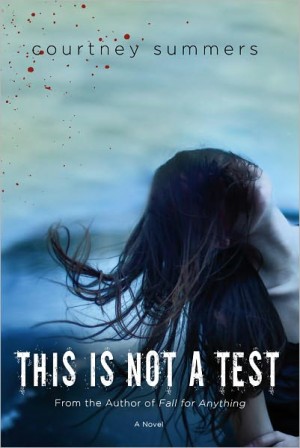 It’s the end of the world. Six students have taken cover in Cortege High but shelter is little comfort when the dead outside won’t stop pounding on the doors. One bite is all it takes to kill a person and bring them back as a monstrous version of their former self. To Sloane Price, that doesn’t sound so bad. Six months ago, her world collapsed and since then, she’s failed to find a reason to keep going. Now seems like the perfect time to give up. As Sloane eagerly waits for the barricades to fall, she’s forced to witness the apocalypse through the eyes of five people who actually want to live. But as the days crawl by, the motivations for survival change in startling ways and soon the group’s fate is determined less and less by what’s happening outside and more and more by the unpredictable and violent bids for life—and death—inside. When everything is gone, what do you hold on to?

REVIEW
This Is Not a Test is my first read by YA contemporary author Courtney Summers. I’m not a reader of contemporary, but I’m certainly aware of how popular she is. This Is Not a Test is her first “zombie” novel, however, it’s probably not what you’re used to when you think of “zombie lit”. In fact, it’s not a book full of gory zombie noms at all. It’s a look at a group of very different teenagers as they hole up in their high school and wait for help to come. There is a plague turning folks into shambling people eaters, but that’s really secondary to the story. It serves as a background for narrator, Sloane Price, and her makeshift family to navigate their own secrets and individual pain while the wolves circle outside. The wolves in this case, of course, are zombies. Before the full impact of zombie apocalypse hits, Sloane is dealing with the pain and betrayal of her 19 year old sister Lily leaving her with their physically abusive father. She’d always told Sloane that Sloane couldn’t survive without her, and now she’s gone. Sloane, now thrown in with this group of survivors, really isn’t surviving, she’s waiting to die.

This Is Not a Test unfolds over a number of weeks, and told in Sloane’s present tense narrative, is very immediate and gripping. What got my attention was the author’s ability to paint a picture of how young people would probably actually behave in this kind of situation. Cliques form, alliances are made, and of course, enemies forged, all with the promise of (almost) certain death looming outside. As you can guess, they can’t stay in the school forever. Will they leave the relative safety of the school to chance finding help elsewhere? Is help even there to be had? Inevitable comparisons will be made to Lord of the Flies, and that’s fair, but they really are two very different stories, although fans of one will like the other. I will point out that if you’re looking for constant zombie killin’ action, this is not the book for you. It’s really about the characters and how they interact with one another. You’ll find yourself taking sides, and you may be surprised with who you side with. Sloane’s voice is perfect for telling this story, and this one will tug at your heart and make the little hairs on the back of your neck stand up.

Purchase This Is Not a Test: Amazon | B&N