I’d like to welcome Kylie Griffin back to the blog! Kylie is the author of Vengeance Born, and the brand new Alliance Forged. Today, I’m giving the blog over to Kylie, and she’s going tell us all about the half-man, half-demon hero, Varian, from Alliance Forged! Also, she’s generously offering a copy of Alliance Forged to one lucky winner, so be sure to check out the giveaway details below the post! 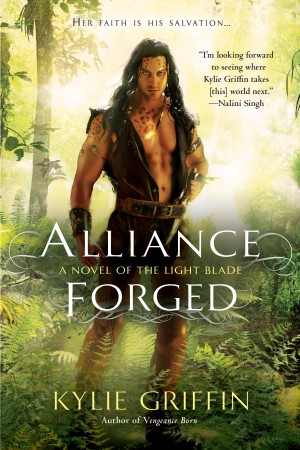 MAN OR DEMON? GIFT OR CURSE?
-by Kylie Griffin

One of the things I love when I’m reading or following a series are the little extra’s shared by author’s about the characters from their books. Whether it’s information shared in an interview or guest blog or even as snippets posted on their websites. It’s like the Special Features in the menu on movie DVD where you can learn more about the making of it, or listen to the actors share insights about the character they play.

When Kristin extended an invitation to revisit My Bookish Ways, I jumped at the chance of a guest blog post with this sort of theme *rubbing hands together in glee*.

Today you get to learn more about Varian, the half-demon half human hero from ALLIANCE FORGED, Bk#2 in the Light Blade series (Berkley Sensation).

Name: Varian
Race: Na’Chi (half demon, half human hybrid)
Age: 26
Background: Varian was one of the first Na’Chi children, other than Annika, saved by human slave Hesia. The elderly healer discovered him scavenging for food in a pile of rubbish outside the Gannec fortress. Unable to save her own half-blood children from being taken from her and killed by the Na’Reish, Hesia has been rescuing Na’Chi babies and children like Varian for many years.

After a failed attempt to live among the human slaves and Na’Reish in the fortress, Varian and the other Na’Chi resorted to hiding and living in the forest surrounding the fortress. With their eyes changing color with their changing emotions it’s easy for a human slave or Na’Reish demon to identify them and the discovery and death of one of their own led to this decision. Living outside they fine tuned their scouting and ambush techniques and managed to remain hidden. 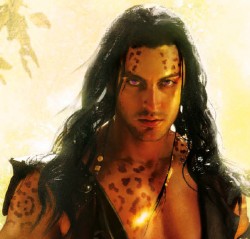 Varian became leader of the rag-tag bunch of Na’Chi youngsters at 15 years of age. With Hesia’s guidance and influence, he kept them safe.

When Annika and Kalan escaped the Gannec fortress (in VENGEANCE BORN), Varian followed them and led the Na’Chi into human territory, in the hope of bringing Hesia’s dream to fruition – to establish an alliance with the humans and find a new home.

Skills: All Na’Chi possess Na’Reish strength and heightened senses. As a Na’Chi scout Varian is able to tap into his Na’Reish half in a heartbeat and during battle becomes as strong and fast as a full-blooded Na’Reish. Some call this ability a Gift from the Lady (the deity humans and some Na’Chi believe in).

For Varian, having such a Gift is a double-edged sword – it helps him protect his people but the kicker is the risk he takes every time he goes into battle. Letting his Na’Reish side loose leaves him open to battle-rush, an insatiable hunger to take a life, the thrill of the kill. That addiction could one day overwhelm him and turn him into a mindless beast who is unable to tell friend from foe. And having spent most of his life honing and using his Gift, he’s finding it harder and harder to control that side of him.

Interesting facts:
Varian shares a close friendship with Lisella, one of the Na’Chi females who sees past his scar and fearsome reputation.

During a fight with a Na’Reish demon, Varian ended up with a scar on his right cheek, from eye to jaw line.

He considers Zaune, one of the younger Na’Chi scouts, one of his friends as the youth reminds him of himself at a younger age.

Because they use their abilities more frequently than other Na’Chi, a scout (like Varian) is twice as more likely to succumb to their darker half.

He prefers the company of the Na’Chi children as they accept him for who he is.

He professes no faith in the Lady as he believes She abandoned the Na’Chi to their suffering at the hands of the Na’Reish.

The beads in his hair signify certain events in his life.

Varian’s greatest fear is succumbing to battle rush and being unable to control the beast inside him.

Does he lose control? Yes.

Does he hurt anyone? Yes! (and I’m not referring to the Na’Reish demons he disposes of either)

More importantly, does he manage to conquer the beast? Well, that’s something you’re just going to have to find out for yourself when you read ALLIANCE FORGED! 😉

How fortuitous I have a copy to giveaway so someone can discover Varian’s fate! But first I want you to step into my world, imagine you’re a Na’Chi or a human who’s been blessed by the Lady and given a Gift (some sort of special ability – good or bad or ambiguous). Would it be superhuman strength or speed like the Na’Chi scouts? Or maybe the power to heal or kill with a touch like Annika from VENGEANCE BORN (Bk#1)? Or could it be the ability to sense soul-pain like the young healer apprentice, Rissa?

What Gift would you choose?
**GIVEAWAY IS NOW OVER AND WINNER HAS BEEN NOTIFIED**

**GIVEAWAY DETAILS**
1. You MUST fill out the form below (lots of chances for extra entries, especially if you answer Kylie’s  question!)
2. Giveaway is for 1 copy of Alliance Forged by Kylie Griffin to 1 winner.
3. Giveaway is open INTERNATIONALLY.
4. Must include a valid email address with your entry (no need to leave it in the comments, just include it when you fill out the rafflecopter form)
5. You must enter on or before 7/20/12
6. Giveaway book courtesy of the author
7. Please see my Giveaway Policy.

About Alliance Forged:
There is no mercy in the demon realm. No escape. In this place of desperation and conflict, anyone who is not purebred is virtually powerless. Until a blind priestess lays claim to a half-breed warrior, body and soul…

Hunted and marked for death by Na’Reish demons for their half-blood heritage, the Na’Chi are searching for a new home—something an alliance offered by the human leader could provide. With both races divided by prejudice, when Light Blade rebels brutally attack the Na’Chi, the alliance seems doomed to fail.

Varian, leader of the Na’Chi, a hybrid race of gifted warriors, is cursed with the darker impulses of his demon heritage. Controlling the part of himself that craves the high of the battle is a struggle he’s afraid he’ll lose—until he meets Kymora Tayn, a priestess driven to serve her deity. While he’s unwilling to trust anyone outside his people, he finds himself drawn to Kymora’s strength and passionate nature, and discovers she has the power to calm the darkness inside him.

When the Na’Reish raid human territory for blood-slaves and kickstart a war, the key to the survival of both races—Na’Chi and human— is an alliance. However, when Kymora is kidnapped, pitting human against human, Varian realizes he must embrace his darker half, not only to save the alliance…but also the woman he loves.
Snag a copy: Amazon | B&N | Indiebound 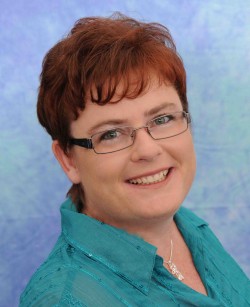 About Kylie Griffin:
Kylie Griffin’s obsession with all things paranormal/fantasy started at an early age, when she used to imagine the jacaranda tree in her front yard was a spaceship used to defend the world from invading enemies. Writing stories seemed a natural extension to her childhood adventures.

Today, she’s a primary school teacher sharing her love for the written word with young children. In her spare time, she writes and reads all things paranormal.

Kylie lives in a small rural village in outback New South Wales, Australia, where she volunteers in a number of emergency service organizations in her local community.
Keep up with Kylie: Website | Blog | Facebook | Twitter | Goodreads | Shelfari