Fantasy Early Review: Monster in My Closet by RL Naquin

Early Review: Monster in My Closet by RL Naquin 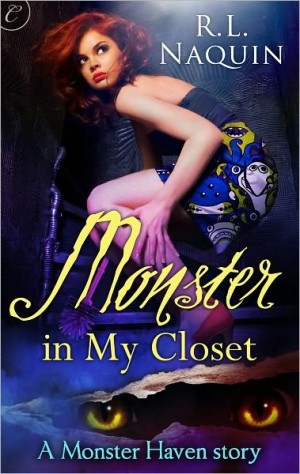 I stopped believing in monsters long ago. But I knew I wasn’t imagining things when I found one in my kitchen baking muffins. I’d seen him before: lurking in my closet, scaring the crap out of my five-year-old self. Turns out that was a misunderstanding, and now Maurice needs a place to stay. How could I say no?

After all, I’ve always been a magnet for the emotionally needy, and not just in my work as a wedding planner. Being able to sense the feelings of others can be a major pain. Don’t get me wrong, I like helping people—and non-people. But this ability has turned me into a gourmet feast for an incubus, a demon that feeds off emotional energy. Now, brides are dropping dead all over town, and my home has become a safe house for the supernatural. I must learn to focus my powers and defeat the demon before he snacks on another innocent woman and comes looking for the main course…

REVIEW
Zoey is half owner of a bridal consulting firm, Happily Ever After, with her best friend Sara. She’s also an empath, although until recently, has always thought she was just particularly sensitive to others’ feelings. When she gets up one morning and there is a monster at her kitchen table, humming to himself, reading the paper and sipping coffee, her world is turned upside down, very suddenly. The monster’s name is Maurice, and did I happen to mention he makes a mean muffin? Well, he does, and his wife has kicked him out, so he needs a place to stay. Soon, a fairy ring is being built around Zoey’s house, there’s a family of brownies taking up resident in her closet, and an incubus named Sebastian that’s out to get her. It’s a lot to take in, but when people start dying, Zoey knows she must do something before the body count gets even higher.

I enjoyed Monster in My Closet so much, and Zoey is my kind of heroine. She’s instantly likeable, has a penchant for loud outfits, and adapts to her situation pretty quickly, considering how fast things begin to happen. I appreciated that once her initial surprise passes, she goes with the flow and does her best to learn about her new friends. And what friends! They call themselves the Hidden, and pretty much encompass any being that humanity doesn’t know about. They prefer to keep it that way, but Zoey is a special case. Turns out her mom, who disappeared when she was just a girl, helped out the Hidden, so it kind of runs in the family. So, we have an empath that’s slowly learning how to keep from being emotionally bombarded, a house full of the Hidden, a skunk ape for a bodyguard, a fox named Milo, and a sex demon that’s determined to make Zoey one of his conquests. Then there’s the hunky paramedic, who may be a little more than he seems, and is certainly interested in getting to know Zoey better. Zoey will have to gather her friends, and her power, to fight a force that’s determined to steal her soul, and the souls of those she loves. Although things wrap up nicely, there’s plenty of material for the next book, and of course, the mystery of her mother’s disappearance still hasn’t been solved. Fans of Molly Harper’s novels will be delighted and it’s sure to appeal to urban fantasy fans that like their creatures charming as well as their heroines. I can’t wait to read more about Zoey and her fascinating friends!