I’m so excited to welcome Jillian Stone to the blog today! Jillian is the author of The Seduction of Phaeton Black and An Affair With Mr. Kennedy and was kind enough to take the time to answer a few of my questions. Also up for grabs are 2 signed copies of The Seduction of Phaeton Black! This giveaway is a little different, so be sure to read the rules carefully, and good luck!

Please welcome Jillian to the blog! 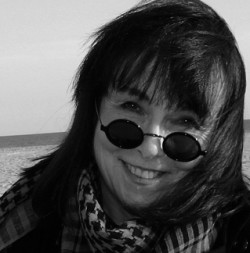 Jillian, you’re the author of An Affair With Mr. Kennedy, and the upcoming The Seduction of Phaeton Black (and more to come this year!) Have you always wanted to write? Can you tell us a bit about your journey?
I have always been a storyteller. At one time, I thought my career trajectory would land me in film, but I am very happy with the turn it has taken into fiction writing. I was an art director in advertising before I decided to try writing novels, which I guess makes me a very visual writer! An Affair with Mr. Kennedy was my second manuscript and The Seduction of Phaeton Black my third. I was fortunate in 2010 to win the RWA Golden Heart for An Affair with Mr. Kennedy, plus I met my agent, Richard Curtis, at the RWA Nationals in Orlando.

How did you celebrate when you sold your first book? Was there dancing? Cake? Squeeing, perhaps?
The auction process took a few days, as my agent had both books out at various interested publishers. The end result? Two, three book contracts! I think I remember celebrating with an iced coffee and cupcake pop! The thing about these career high points is that (for me) they are both thrilling and terrifying. Your life as an author makes a sudden shift from being a dream to a job.

Your steampunk paranormal, The Seduction of Phaeton Black, just came out (yay!) Can you tell us a bit about it?
Here’s a blurb:
THE YEAR IS 1889 and Queen Victoria, exemplum of decency and sobriety, is in her fifty-second year of reign. Paranormal Investigator, Phaeton Black, on the other hand, couldn’t be less interested in clean-living. He has recently taken up residence in the basement flat of London’s most notorious brothel. A dedicated libertine with an aptitude for absinthe, he wrestles with a variety of demons both real and self-inflicted. Unfairly linked to Scotland Yard’s failure to solve the Whitechapel murders, Phaeton is offered a second chance to redeem himself. A mysterious fiend, or vampire is stalking the Strand. After a glass and a consult with the green fairy, he agrees to take on the case.

On his first surveillance, Phaeton pursues an elusive stranger and encounters several curious, horrifying beings. But the most intriguing creature of all is a Cajun beauty who captures him at knifepoint and threatens to spirit away his heart. 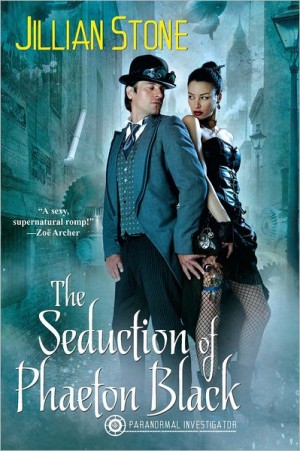 Why do you think steampunk is so popular right now?
Steampunk is just so much fun to write and it is also a change of pace from vampires and shifters. I like to mix up genres so there are steampunk, paranormal and historical elements in Phaeton Black as well as a touch of Sherlock Holmes. It’s also a sexy read (Scorcher TOP PICK from RT Reviews) Just warning readers!

What do you love most about the genre?
The gadgetry! Both The Gentlemen of Scotland Yard Series and The Phaeton Black series incorporate steampunk gadgets. I‘ve also included a number of interesting steam driven machines, from airships to submersibles.

Do you have any unusual writing habits?
There are days when I don’t even bother getting out of bed. (Except to make coffee, of course!) I just prop up a few pillows and set my lap top on a breakfast tray. The ultimate in pajama writing!

What are some of your biggest literary influences?
Poe, Dickens, Lewis Carroll, Stephen King, Diana Gabaldon, Anne Rice, Ray Garton. In some ways, my storytelling is more influenced by filmmakers than writers. Might I include some amazing storytellers from film who I admire greatly? Guillermo del Toro, Tim Burton, J. J. Abrams, Alfred Hitchcock. M. Night Shayamalan (I like a splash of horror in my whimsy!)

If you could read one book again for the first time, which one would it be?
It’s between Interview with a Vampire and Outlander.

What’s on your nightstand right now?
Firelight by Kristen Callihan and Wicked as they Come by Delilah Dawson.

When you’re not busy writing, how do you like to spend your free time?
Not sure what you mean by free time––do writers under contract get free time? Gosh, if I write more books for either Pocket or Kensington I’m definitely going to ask for that!

Is there any other news of upcoming projects or events that you’d like to share with us?
I have six books coming out in my debut year as an author. I can hardly believe I just wrote that, but it’s true! At the end of this summer, A Dangerous Liaison with Detective Lewis (a Steampunk Victorian road trip with a sexy creepy villain). End of September, The Moonstone & Miss Jones (second installment of Phaeton Black) Sometime in October there is Pocket e-novella in the Gentlemen of Scotland Yard series (as yet untitled) and to finish up the year, A Private Duel with Agent Gunn arrives in time for sexy Holiday reading and gift giving. Whew!
Keep up with Jillian: Website | Twitter | Facebook

**GIVEAWAY DETAILS**
1. You MUST answer this question in the comments: Whenever I begin a new story. I often use the voice and expressions of actors or real life people I know to help visualize how a  character moves and speaks. Eventually, a kind of magical thing happens and the character grows into himself (or herself).
Take a guess at which three actors (click on each hottie’s name to view) went into my hero bouillabaisse to create Phaeton Black? One copy of The Seduction of Phaeton Black will go to the first commenter who gets it right, and another copy will go to a commenter chosen at random. Good luck!
1. Tom Hardy
2. Colin Farrell
3. Ben Barnes
4. Johnny Depp
5. Robert Downey, Jr.
6. Dominic Cooper
ADDITIONAL GIVEAWAY DETAILS:
1. Giveaway is for 2 *signed* copies of The Seduction of Phaeton Black to 2 winners (see details above)

2. Want some extra entries? Follow me via Twitter (@mybookishways) or Facebook and let me know you did so (make sure you leave the appropriate usernames.) I’ll give you 1 extra entry for each (for a total of 3)

3. Giveaway is open INTERNATIONALLY (everyone on Planet Earth)

4. MUST include a valid email address with your entry