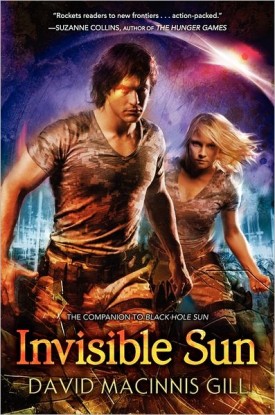 You don’t want to mess with Durango.
He left his crew behind.
His father is dead.
And he’s going to prove himself to Vienne,
even if he dies trying.
As he races through flood and fire and across a violent and terrifying planet,
there’s a 97% chance he’s going to die trying.
But who’s counting.

REVIEW
Invisible Sun is a companion novel to the wonderful Black Hole Sun, so you don’t have to have read Black Hole Sun first, but it will definitely make the experience that much more fun. That said, as much as I loved the first one, Invisible Sun blew me away! The action starts right away, with Durango and Vienne on a job to steal some rather sensitive data, and as soon as they wrap that up, they head out to meet Vienne’s family. It’s not quite what you think, though. Vienne was raised at a monastery, and watching as tough guy Durango deals with quiet, contemplative monastery life is entertaining to say the least. Not to mention the dance lessons! Seeing this gentler side of Vienne (who’s about as tough as they get) is new for Durango, but just reinforces his feelings for her. When trouble at a nearby collective stirs our Regulators into action, this kicks off a series of events that tests the very limits of our heroes.

I did say I love this series, yes? I do, and I adore Durango and Vienne, so this one was hard for me to read in places. Durango’s love for Vienne carries the book, and they’re both nearly done in by what the bad guys put them through. Vienne’s ordeal is particularly bad, and my heart broke for her repeatedly. The bad guys (especially the star baddie, the sniveling Archibald), are really bad and have no problem with mowing down anyone that gets in the way of their plans. Seriously, Archibald’s preoccupation with fire is chilling and terrifying. Durango makes a new friend in Riki-Tiki, the young Tengu initiate who would rather be in the middle of the action, and she’s sure to charm your socks off. Also ever present is Mimi, Durango’s AI that only he can hear, and who’s sarcasm steals the show repeatedly. Speaking of action…it rarely lets up and there are a few revelations that had my jaw on the floor. I hate that I’ll have to wait until March 2013 for the next one, but it will be worth it. Totally.